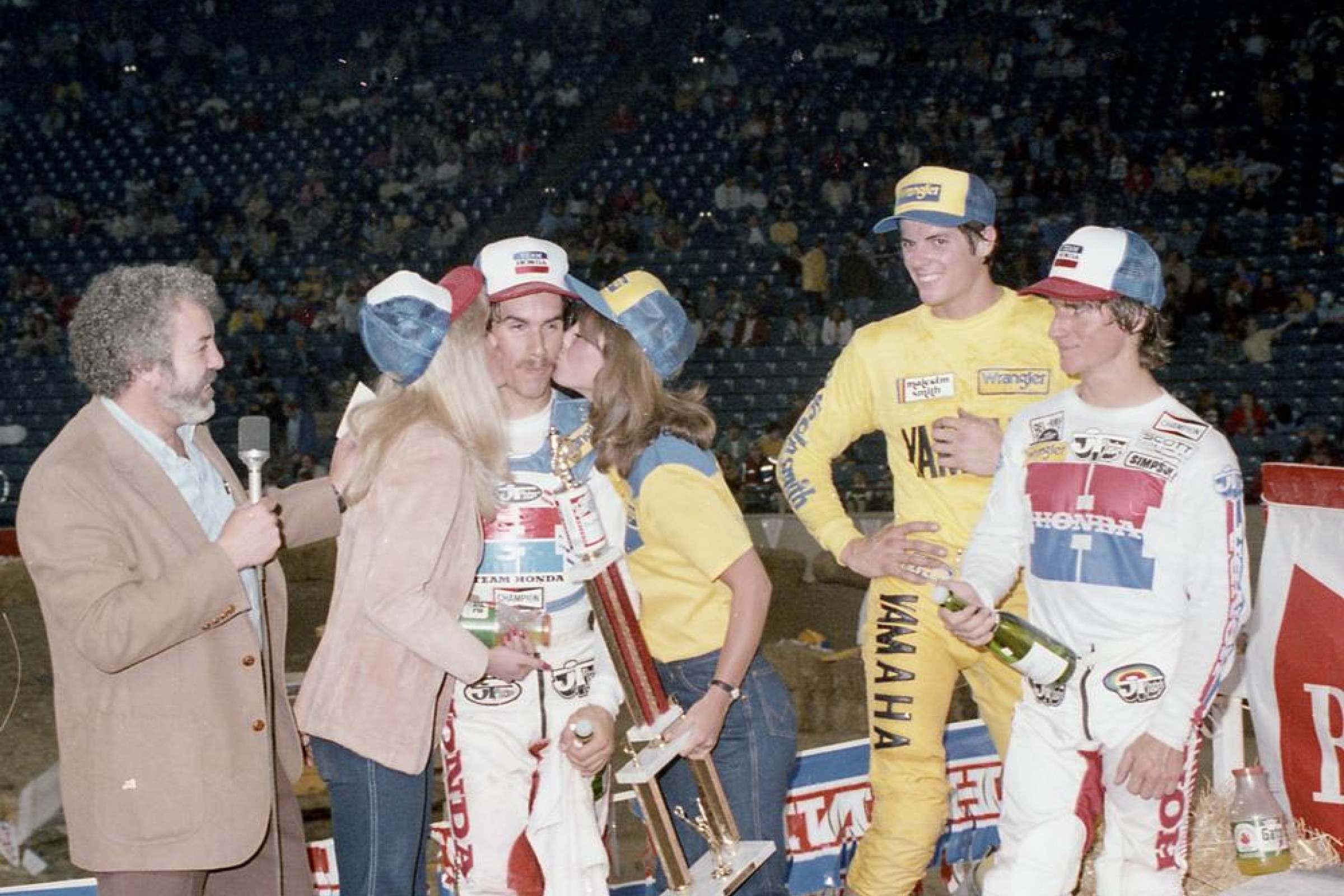 On This Day in Moto April 24

Man, we missed one yesterday, but it's too relevant to last weekend's events in Foxborough to leave out. It's amazing to us that people don't list the 1994 Dallas Supercross among one of the all-time great races—if you fast-forward to the 41-minute mark of the video below, you'll see what we mean. Team Kawasaki's Mike Kiedrowski made what appeared to be a last-lap pass in the whoops on Honda's Jeremy McGrath, the series points leader and defending champion. But Jeremy held on longer at the end of the whoops, the two tangled, and both went down. That allowed the closely following Mike LaRocco, Kiedrowski's teammate, to sneak past both and, two turns later, claim an unlikely win.

Have a look and see what you think (and also think of what happened with Marvin Musquin and Eli Tomac on Saturday):

The 125 class featured both East and West riders, and it was East Region contender Jimmy Button of Team Suzuki who emerged as the winner, with his teammate Ezra Lusk second and West Region points leader Damon Huffman, yet another Suzuki rider, third.

On the first night of the Pontiac Silverdome doubleheader, Team Honda's Donnie Hansen got another main event win on his way to the 1982 AMA Supercross Championship. His teammate Jim Gibson finished second, and former series champion Mike Bell of Team Yamaha was third. Johnny O'Mara and Warren Reid rounded out the top five.

American rider Rodney Smith, the future five-time GNCC #1 and AMA Motorcycle Hall of Fame member, was announced the winner of the second round of the 1988 FIM 250cc World Motocross Championship, held on the island of Ibiza, Spain. Riding a Chesterfield Suzuki, Smith went 2-2 for the win over Michelle Fanton's 1-3. The FIM stepped in to explain that while Smith had the better second moto, Fanton scored more points (35 to 34), and he was declared the overall winner. Third went to John Van den Berk's 9-1.

Also on this day in 1988—and also related to GNCC Racing—Bally, the world's largest manufacturer of pinball machines, released its Blackwater 100 game. The machine was designed by Dennis Nordman, an employee of the company and a participant in the race a few times in 1970s, and featured multi-time winner Mark Hyde. It was sponsored by Suzuki Motorcycles and ATVs, and one of the machines still sits in the lobby here at Racer X.

Team Yamaha's Bob Hannah won the AMA 250 National at Omaha Moto Park in Nebraska. It was kind of weird because Hannah, the defending AMA 125 National Champion, had been dispatched to defend that title in '77, much to his chagrin, because the first round of the year—Hangtown—featured both 125 and 250 classes, so Hannah could not contend for the 250 title. He also won a 500 National in '77, making him the only rider in AMA Motocross history to have won a National in a single season in all three classes (he also won three 125 Nationals, though the title ultimately went to his teammate Broc Glover).

Hannah did come closer in the 500 Class, finishing a close second to Team Honda's Marty Smith after his throttle cable broke at the final round at St. Petersburg in Florida. He lost by 24 points—one shy of what he would have earned had he won the moto in which he broke down.

Ryan Dungey clinched his first of four Monster Energy Supercross titles with a fourth-place finish in Seattle. The Rockstar Makita Suzuki rider had already wrapped the title for all practical purposes before round 15 of the series began. The only rider with a mathematical shot at him, Ryan Villopoto, was out with a broken leg. Dungey joined Jeremy McGrath as the only rookies to win a premiere class title, although Kevin Windham won the race over Tommy Hahn and Justin Brayton.