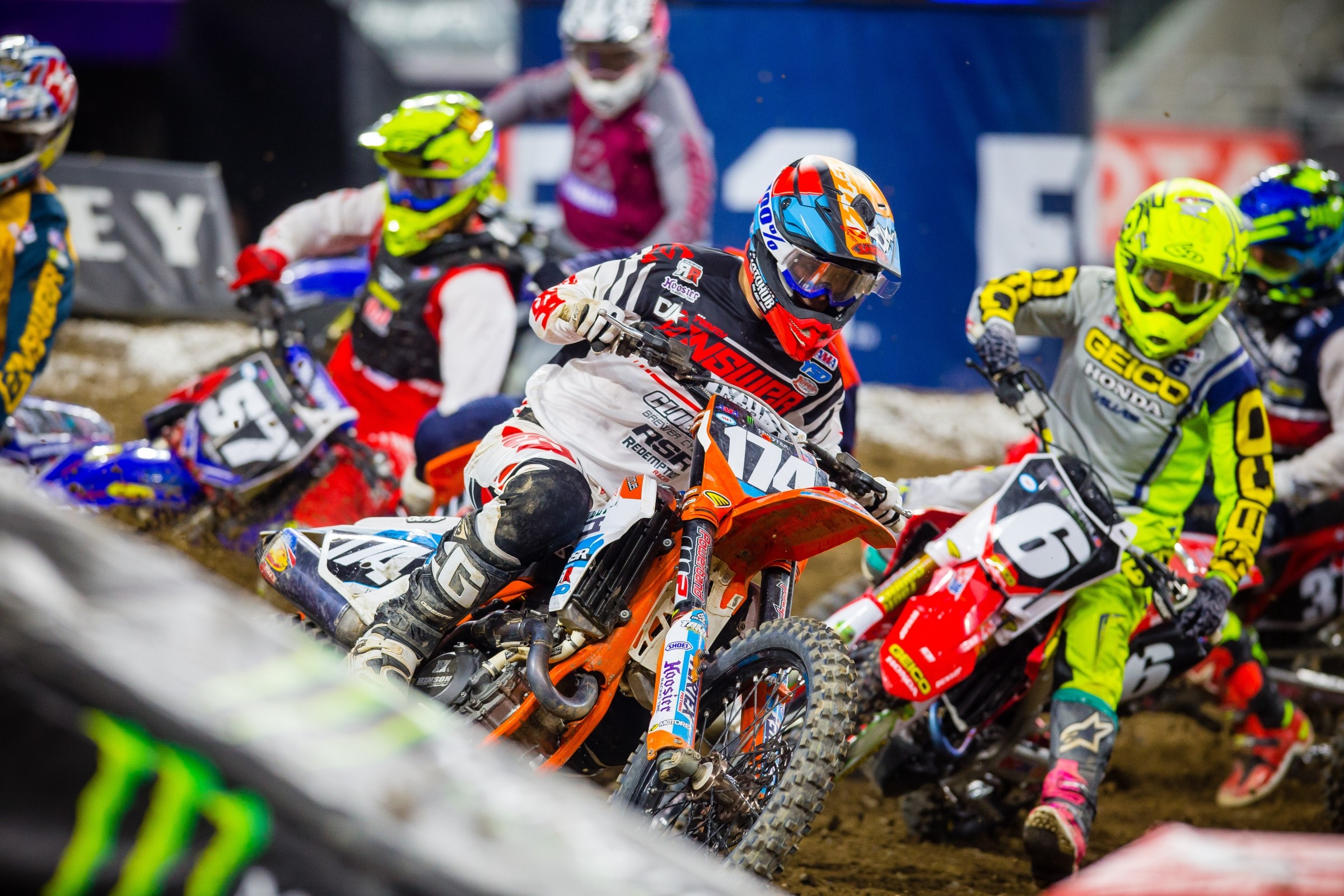 Josh Osby and John Short had career nights this past weekend in Minneapolis, both finishing in the top ten overall in the 250SX Class.  In the final 250SX race of the night, Osby nailed down a pretty decent holeshot and even led the pack for the first lap while Short tallied 11-8-8 scores for eighth place overall. We found both riders hanging out in the back of the room during the post-race press conference and decided to grab a quick word with each of them. Below is a transcript of our conversations.

Racer X: That last main event you nailed the holeshot. You looked pretty solid up there leading for a little bit. Just kind of take us through that in your words.
Josh Osby: This is a rookie season for me, so obviously when I got out in the lead, I was pretty nervous. We work a lot on starts at Club MX. I feel like my starts have been pretty good all year; it’s just finally getting that holeshot. So many things happened getting me there. To finally get it done tonight was really awesome. Now that I go back and look on video, I messed up that first rhythm after the start there on the second lap and that really cost me. I actually pulled a little bit of a gap there when [Jordon] Smith got into [Zach] Osborne. I need to holeshot another one and clean it up. But it was awesome. [It was] so cool to lead a race. That’s been a goal of mine. We’re going to keep working and hopefully keep it up there.

Did you really have time to think about it? What was going through your mind when you came out of the first turn? Were you like, “Finally, I got one”?
I was definitely happy about it, but just tried to focus forward. I didn’t even really overthink being out front. I just kind of forced things a little bit and didn’t just calm down and hit my marks. That obviously cost me in that first rhythm lane. So, something to maybe work on, just relax, calm down. Those guys go fast, but if you can just hit your marks, I definitely think I can be up there with them.

A little bit of redemption from the first round where you took a little bit of heat. You want to kind of clear the air, talk about that a little bit?
That deal is what it is. People are always going to have their views on it. In my situation, I couldn’t turn left—where everyone thinks I could turn left. So that deal is what it is. It’s passed. I definitely got a lot of heat from it, but just to show everyone I can start up there and I can lead laps. It’s kind of nice to get a little redemption on that.

You definitely seem happy. What’s your mindset now heading into next weekend?
Absolutely. This season has been a little bit tough for me as far as crashes and unfortunate situations going on. Like Indianapolis was a rough one for me. Just things that are out of my hands. Tonight was awesome to get a sixth. Obviously, I had three career-best finishes. Just something to build on, finally. You sit there scratching your head after each weekend. The weeks are so good, and then you get there and you get one main event and a crash or something goes on and you’re sitting there scratching your head like, why are we in 18th place? To finally get something to build off of and work towards, that’s a huge thing going forward.

Racer X: Go ahead and introduce yourself and just kind of talk about how your night went and what you’re looking forward to the rest of the season.
John Short: I’m John Short from Pilot Point, Texas. Minneapolis Supercross we ended up eighth overall, so that’s a season-best for me. I felt like I could have been in the top ten all year, so I’m just looking to build off this and keep putting in some good finishes in Boston and Vegas. That’s my goal.

How’s your season been like so far? How would you overall rate your season?
I felt like it’s good in the aspect that my speed is better. I’ve had a lot of crashes and haven’t had very good results, but I’m just keeping it on two wheels and I feel like I’m capable of being in the top ten every weekend. That’s the goal from here on out.

Where do you do your training? Just kind of run down your program a little bit.
I’m from Texas. Where I train, it’s right across the Texas border and Oklahoma, Compound 77. My suspension guy is there. That’s where Sean Hackley is doing some training, Kyle Cunningham. There’s a group of us that just train out there. They got a supercross [and] motocross track. Pretty much three, four days a week, that’s where we’re at.

What’s your mindset heading into next week?
My mindset for next weekend is just click off another top-ten. My speed was really good. I got better as the night went on. I feel like I could do that every weekend.

As a guy who’s not a factory rider—we’ve heard the opinions from the top guys. What’s your opinion on this Triple Crown format? Do you think it plays into the favor of the privateers more, or do you feel at more of a disadvantage? What’s your overall feeling on this format?
I’ll say there’s a lot more bike time, so you got to be in shape. I was initially negative kind of coming in. I didn’t think it was a great format. Short races, got to get good starts. Actually, I had a lot of fun. You come off the track from race, you’re still warmed up, you go back to the gate. It actually makes it even more fun and entertaining even, I think.

The intensity is definitely higher. Do you feel like maybe the privateers have more experience in those do-or-die LCQs, so that that experience kind of helps with those shorter, more intense races?
Yeah, for sure. I’ve been in a few LCQs this season and I’ve had to really fight to get out of it. So coming into the first main event, I made some pretty good contact with them guys. Not trying to be dirty, just trying to get around them. The intensity is way up. My heart rate was working. I guarantee it was maxed out the whole moto.

Head over to Racer X Brand and check out some of our Sale Rack items for 25 percent markdowns. Odds and ends, overstock, creating space in the stockroom.... No matter the reason, the Racer X Brand Sale Rack is the place to get more for less.