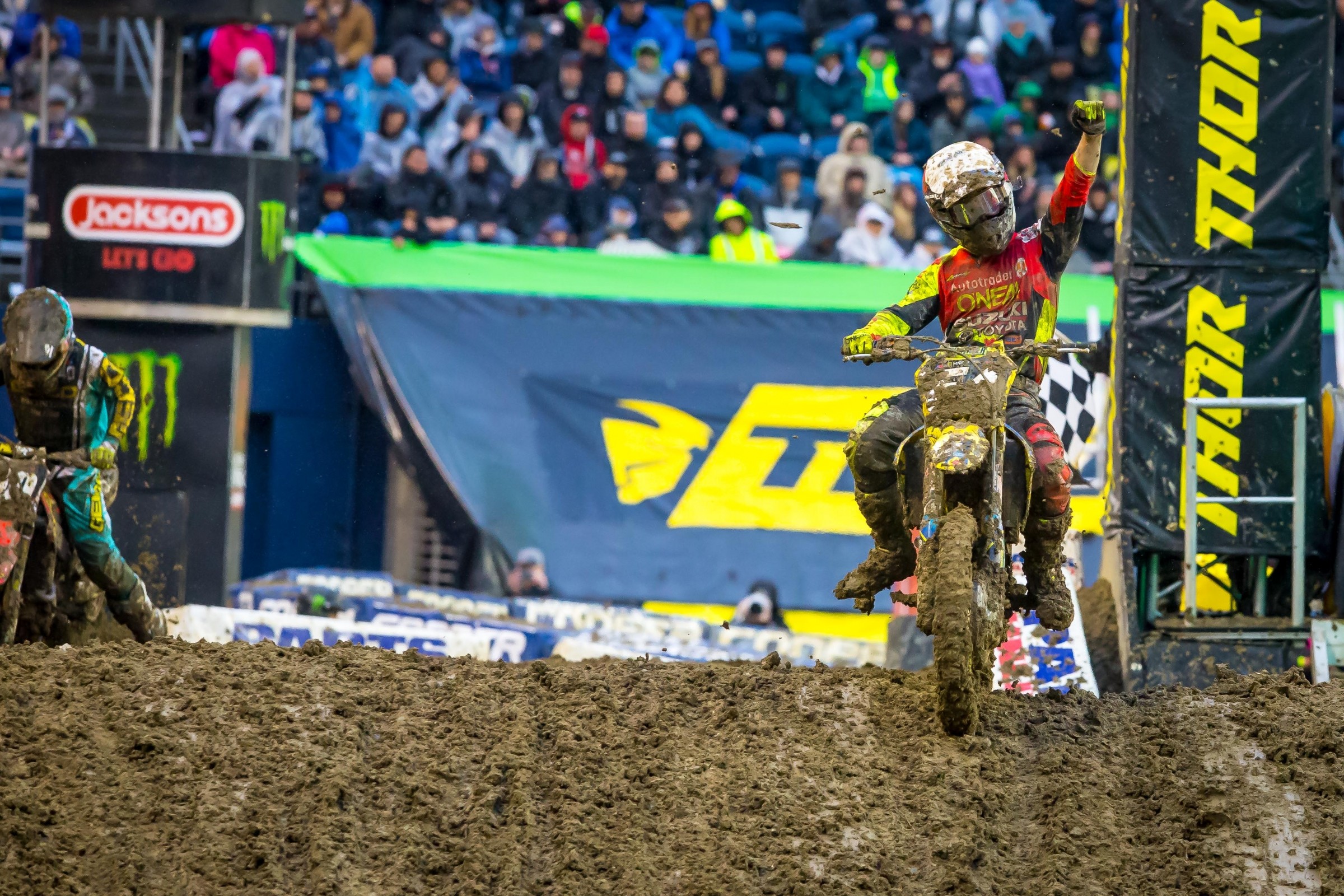 The rain definitely came down in Seattle last week, and that left us with the first true mud race since Las Vegas in 2016—except this race was much worse. The muddy conditions gifted us with some wild heat races, impromptu track changes, and a big points swing in the 250SX class, as Joey Savatgy finished 12th in the race and now sits 24 points behind Aaron Plessinger and seven behind Adam Cianciarulo.

The 450SX class wasn't quite as eventful, as the expected guys were up front, but we did get to see season-best finishes by Broc Tickle and Chad Reed, as well as an unintentional smoke show put on by Reed at the finish.

After the heat races, Feld made the decision to adjust the track to fit the conditions by removing the whoops section and turning it into a flat straight. This decision received mixed reviews by fans and even the 450 podium finishers. Here's what Marvin Musquin, Jason Anderson, and Eli Tomac had to say about the change after the race.

Racer X: There was a change to the layout of the track towards the end. They took out the whoops. How did that either benefit you or affect you, given that you might have already had adjusted to that challenge?
Musquin: I feel like that little straightaway without, obviously, the whoops, it was pretty much the only part of the track where we could get on the gas hard. The other straightaway, but they had to clean the whoops. It actually gave it a little bit more speed and a little bit more intensity to our riding going around the track. I feel like in the heat race, I know it was technical going through the whoops and a couple guys went down. I don’t know what you guys think, but I think it would have been okay if they would have left the whoops. Maybe they wanted a little bit more speed for TV or something. It was really slow going through those whoops.

Anderson: I was pumped that they took the whoops out because I crashed there in the heat race. They were tough, though. Honestly, we were rolling through them, but it was hard to just roll through them. It was technical, that’s for sure. For me, I was not bummed when I heard they took them out.

Tomac: I knew either way, it was going to be just a crazy race. They were gone, but we had plenty of other things to deal with.

It definitely made the lap times quicker. Here, I compared Tomac's lap times from the main event to his heat race, as he was one of the only riders to have two relatively clean races. Check out the difference.

Mud races always inject some craziness or unpredictability to the night show, and one of the craziest races was the first 250 heat race, where we saw five different leaders who all crashed or got stuck at some point in the race.

Phil Nicoletti was eventually the victor of the race, after Mitchell Oldenburg tipped over on the second lap, Cianciarulo's clutch burnt up, Shane McElrath got stuck in a deep rut, and Chase Sexton tipped over. I wanted to show how crazy this heat race was, so I charted out how many seconds Nicoletti was behind the leader on each lap. Add this goes to the prove that pretty much anything can happen during a mud race. Also, if you're thinking Nicoletti raked in some sweet cash for a heat race bonus, think again. Here's his answer to Steve Matthes after the race.

Matthes: What was your heat race bonus?
Nicoletti: Not good. Worse than yours.

He didn't win the race, but Chad Reed might have gotten the most cheers after he muscled his bike across the transponder line while his bike poured out smoke. It didn't actually matter if he crossed the line or not since he was the last rider on the lead lap in seventh place, but it did make for some good theatrics.

Reed explained what he was feeling during the main event to us after the race. He said, "The thing that kind of bums me out a little bit, I guess, is I was cautious and I was aware of the bike kind of already feeling hot. So, then I started to try to ride it in a way that I wasn’t so hard on it. But, obviously, I could feel it getting warm. I could smell it and all those things. So, then I’m like, I was in a pretty comfortable, pretty easy fifth. Whenever I kind of got a bit of a rhythm going, I felt like I could catch [Broc] Tickle a little bit. But I kind of had to let go of that just because every time I pushed a little bit, the bike just felt like it was getting worse. So then three laps to go, I’m like, it’s going to be close. Then on the last lap there I was wide open and it was going nowhere. Then the thing was, I was trying to limp it home and the last lap, like I said, I was wide open and it was just kind of slipping. Then I heard the crowd go off and the flame, so I knew Eli [Tomac] was kind of right there. So, I’m like, there can’t be too many people behind me. So, I’m like, f*&k it. I’m going to pin it. It doesn’t matter at that point. No one can beat me other than the two guys that I was battling with anyway. So, I just went for it and she didn’t quite make it. We almost got there. But, anyway, it was still my best race of the year. It was a lot of fun."

Taking a look at his lap times, you see where he backs it off a little bit to save the bike and where he drops his times to fend of the Tyler Bowers and Cooper Webb when he was still in fifth place. In the end, seventh place still ended up being the best finish of the year for Reed, and with the unpredictability of the last Triple Crown of the season coming in Minneapolis this weekend, look for Reed to maybe sniff the top five once again.