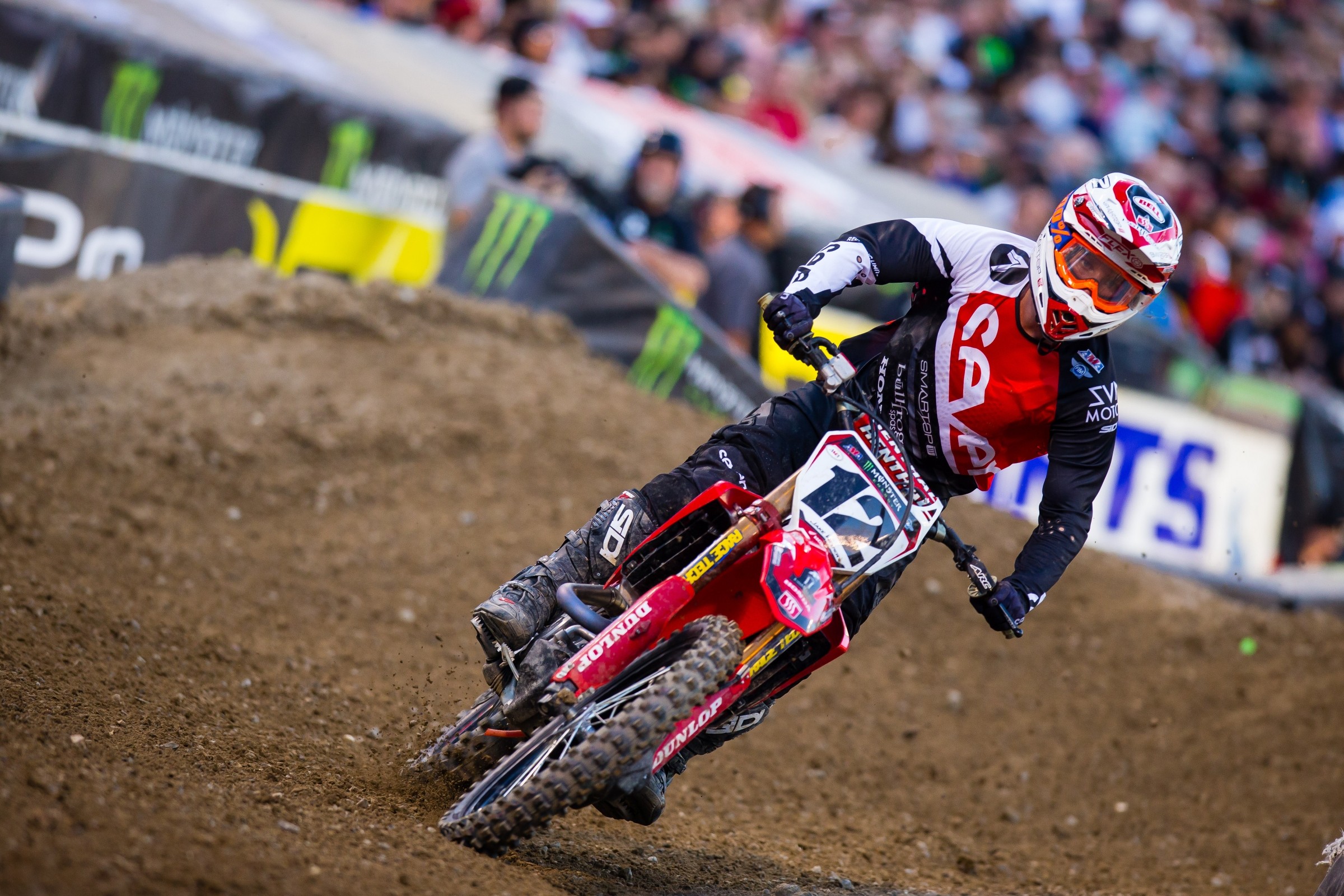 Last off-season, Jake Weimer was able to lock down a ride with Smartop/Bullfrog Spas/MotoConcepts Honda all the way back in August, which is fairly early for a contract to be inked. Unfortunately for Jake, he was sidelined less than a month later by a big practice crash. Due to the extent of his injuries in September, Jake was unable to line up to race supercross until round four in Glendale. Two rounds later, during practice at San Diego Supercross, Jake suffered another injury and was sidelined once again. We saw him riding out at Milestone last week and talked to him for a few minutes to see how he’s doing, when we can expect him back on the race track, and what lies beyond his current one-year deal with Smartop/Bullfrog Spas/MotoConcepts Honda.

Racer X: It’s good to see you back in some riding gear. How long have you been back on the bike?
Jake Weimer: Second day. I rode Monday and then today. So, just getting back in it.

I was talking to you earlier and you said you might have to take tomorrow off because your hands are so beat up right now.
Yeah, I was going to ride tomorrow, but it’s hard because getting the time in is important, but at the same time I want to be productive, and my hand is so torn up right now that it’s hard to even hold on. Coming back, it’s always trying to ride that balance of doing as much as you can and being productive.

It was back in February that you hurt yourself. Can you remind everyone exactly what your injuries were?
So, San Diego Supercross, I just had a break on my radius that I was able to leave alone. Didn’t have to operate on that, and then two metacarpals in my hand all on the right side. So, they had to go in and plate both of those metacarpals. So, two plates and however many screws. Initially I thought that that was kind of it for the supercross season, but things healed quick and it feels good. Like I said, I have no pain. So I’m going to go out here for a few weeks, and my goal is I’d like to try and do the last two supercross rounds. So we’ll see. I’ll take it day by day, but right now I feel good. This one compared to my last injury in September is so much easier to deal with. Just, again, not having pain and being able to ride and train.

Are you having any lingering effects from that last injury in September?
Yeah, my elbow still hurts. I don’t see that going away any time soon. That still bugs me a little bit, but that’s it as far as ribs or lungs or anything else. Everything else is fine.

While you were out with the hand injury, were you able to keep up on your fitness and everything? Where are you at with that?
I didn’t for three weeks. The first week I just didn’t really do anything. I just sat in the corner and be depressed for a week. Then when you’re done with that, then I had surgery. Then with the incision and being in a cast and stuff, I asked them and they didn’t want me sweating and getting bacteria in the surgery site and incision and get an infection. So I definitely took some time off, but full steam ahead.

How’s the mobility in the hand?
Good. I’m close. When I went for my checkup, I was kind of assuming they were going to put another cast on me, and he’s like, “No, you look good. Take it easy and feel it out, but everything looks pretty good.” I cranked on it physical therapy for about a week and I’m close to full range of motion. Now I just need a little bit more strength in my hand. My hand and my fingers are a little bit weak, but in general, it’s way in front of what I thought it was going to be.

How’s the vibe with the team? MotoConcepts has been doing really well with the success Justin Brayton is having. Has that excitement and positivity carried over here to home base?
Yeah. I wasn’t really around for a couple weeks other than just phone calls and checking in, but it seems they’re doing really well. So, yeah, I think the vibe is good and everybody’s happy. I’m just getting back into it. I hadn’t been to any races or anything. Like I said, just phone calls and checking in and all that.

The MotoConcepts team is supercross only. Do you have a plan for outdoors?
No, I don’t have any plans. It’s one of those things I always tell people. You never know. If the right situation came up, I’m definitely not against outdoors. I’ve said it before and I feel this way—I’m not going to go work that hard in the heat of the summer for free. Like I said, I enjoy doing them, but it’s too much work and risk to do it for free. That’s not on my menu. If the situation was right, I would love to do it. For now, no plans.

Where are you with your contract with MCR?
It will be up after supercross.

Any talks been happening with that?
I haven’t brought anything up. I’m sure we’ll get there, but I haven’t really brought anything up. With me getting hurt in September and missing a bunch of races, and then I just came back and got hurt again…. For now, I’ll cross that road when I get there. For now, I’m going to do what I can and put my head down for the next month and see if I can be ready and do the last two. That’s all I’m focused on now. Once I get through that and see where that goes, then I’ll take the next step.

It’s tough when you get hurt like that because you never really got to show them what you had. That probably puts some weird pressure on you, but what can you do?
That’s what’s been cool. Nobody’s been breathing down my neck. “You need to do this, or do that.” I was so excited about the deal and just right out of the gate just having some serious injuries and clawing through that, and then just coming back. This injury was just [dumb]. I didn’t even crash hard. It was really stupid. It’s been frustrating, but I’m not the only one. As you can see, there’s a lot of guys hurt and that’s just unfortunately part of what we have to deal with. Definitely a bummer. I envisioned things going much different, but it is what it is. For now, just try and enjoy riding and enjoy the process of training and trying to get ready. I have a little over a month. I’ll do what I can.

Is there any chance we might even see you before that if you’re feeling good?
I would like to say yes, but I feel like it would have to be a miracle. I always feel like if I’m in decent shape and I can have a solid month with no problems, then I could go racing. I’ve done that in the past. That’s pretty much where I’m at right now. That would be Salt Lake. But if I’m ready before then, yeah, I’ll go. It’s tough to be 100 percent in a month. That’s what the off-season is for. Two, three months of training, riding, testing. Then you’re ready. But I’ll do what I can.