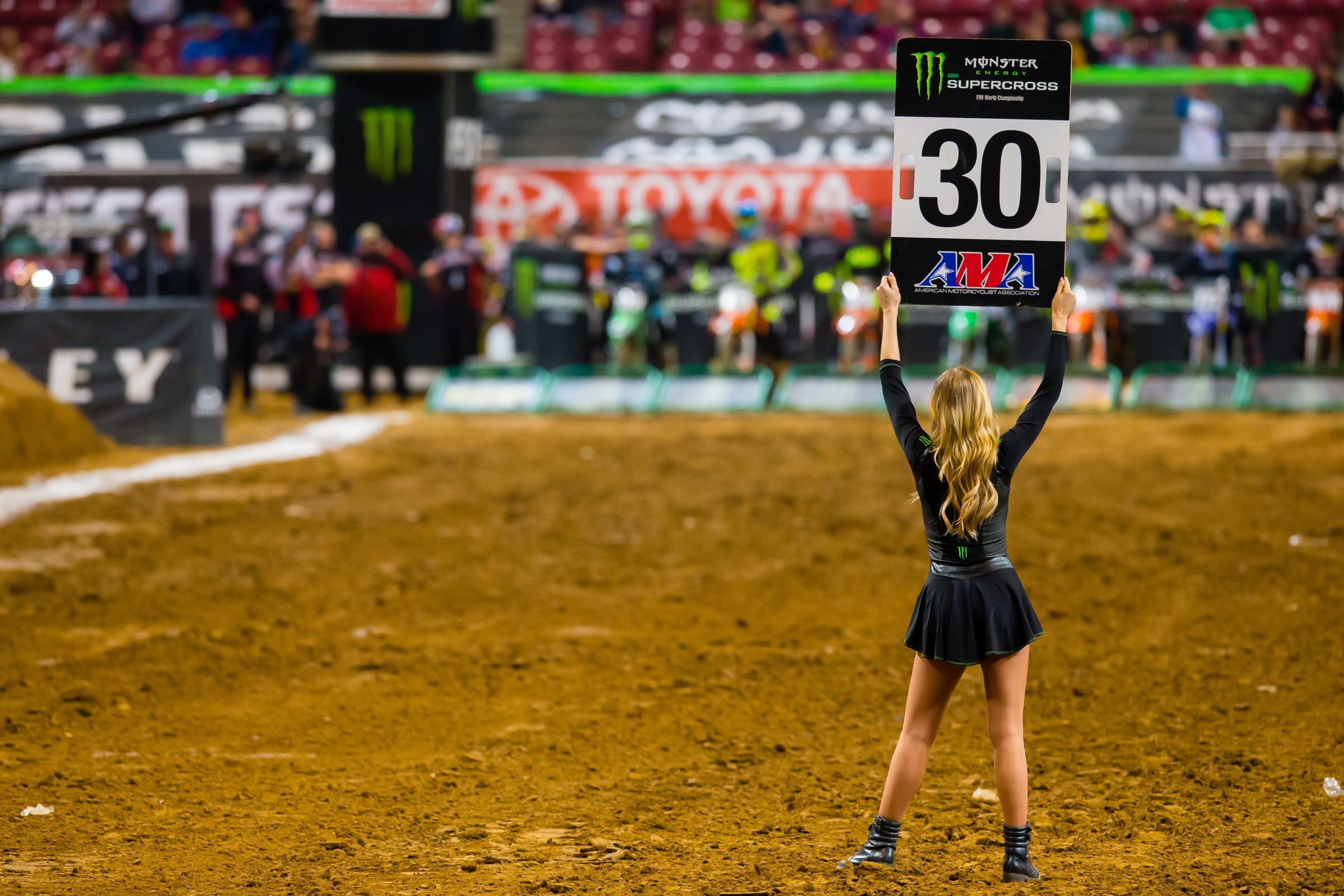 “This is one of those times to where sometimes you have to swallow your pride a little bit. But at the same time, Eli was just savage. He was crushing us,” Anderson said in the post-race press conference.

The 250 class was a closer affair—briefly—with title combatants Zach Osborne and Austin Forkner going toe-to-toe before the young Monster Energy/Pro Circuit Kawasaki rider crashed while leading. Osborne cruised from there to capture his first win since the opener in Arlington. He now holds an eight-point lead in the championship standings.

We told you about Tomac’s flawless route in The Show-Me State, but if you dig through his lap times in comparison to the rest of the field, it somehow becomes even more extraordinary. Here are some impressive numbers:

Laps put in under 48 seconds. Jason Anderson was second-best with six; Musquin had two.

Of the first 13 laps, he registered a time under 48 seconds.

Oh, what could have been. Entering St. Louis tied in points, Austin Forkner and Zach Osborne were set to go head-to-head again in the main event, as the two darted out to an early gap over third. Osborne really started to apply the pressure around lap seven, but Forkner was able to hang onto the lead until he crashed out on lap 11.

“Yeah, I felt like he kind of gapped me a little bit three or four laps in, and then I was able to kind of find my feet and make some places where I felt like I could kind of hammer and get close to him,” Osborne said. “So, I knew that we were only sort of halfway in and I still had plenty of time. I was just trying to be a little bit patient and kind of let it come to me. Then obviously he went down, so it was a bummer for the race, but it made it better for me.”

Osborne went on to win the main event, and coupled with Forkner’s fifth, he now sits eight points up heading in Indianapolis.

Check out a side-by-side comparison of the two before Forkner crashed.

The only real battle in the 450 main event was a fight for fifth between battered and bruised Weston Peick and battered and bruised Blake Baggett. While neither had much on the line, you would have never known, as they fought for nearly the entire main event over fifth. Baggett moved into seventh behind Peick on lap five and followed him as they moved past Broc Tickle. Then, Baggett stayed there. No matter what he did, he couldn’t get around the immovable force that was Peick.

“It was a good race, he was riding really well,” Peick said to Steve Matthes after the race. “I started about tenth and passed a few guys. We’re coming off riding with injuries and whatnot. He was on me, so I just rode my race. I had some faster sections and he has his faster sections. All night I felt comfortable. Track was good, dirt was good, it was a fun layout.”

Check out how the last nine laps stacked up for the pair.

Forkner’s fifth didn’t come without controversy. Late in the race, he collided with rookie Ramyller Alves as the two exited the whoops. Alves wrote on social media that he didn’t get a blue flag as Forkner approached:

“Incident with rider — I want to get it cleared out, I wasn’t trying to take out or hold up any rider that was on the lead lap. On the lap of the incident, from the finish line jump till the accident I didn’t get one, not one blue flag waved at me, I had no idea that the rider behind me was a rider on the lead lap. I was battling for positions the whole race and not seeing a blue flag being waved on that lap, caused me to think that he was a rider I was battling with. Couple laps before the incident, I got a blue flag waved so I let the rider behind me pass, but it ended up not being a rider on the lead lap, it was actually a rider I was battling with. It’s a difficult situation to be in as a rider.”

Forkner, who lost about ten or so seconds in the crash, and was visablly upset with Alves after the incident, said he probably could have handled it a little better:

“As far as my little 'tantrum,' I prolly should’ve calmed down a bit before I said something, but hey, tempers are high, it’s a close championship, and it’s not over.”

Here is how their lap times compared before and after the incident: