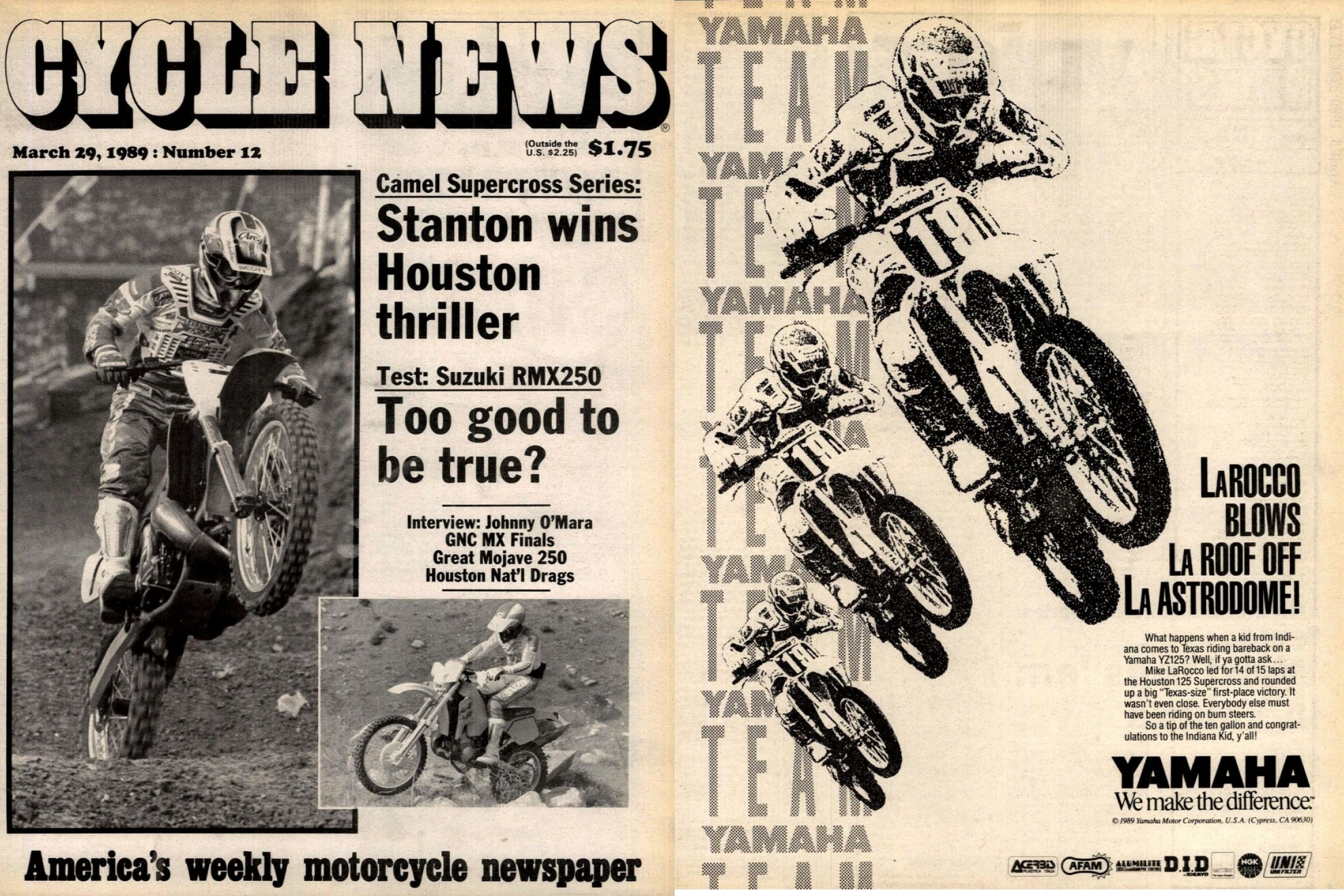 On This Day in Moto March 18

In a brutal second night of the Houston Astrodome doubleheader, Yamaha's Bob Hannah won to complete a weekend sweep, but the first turn carnage would have long-lasting consequences. Suzuki's DiStefano, the reigning three-time 250cc AMA Motocross Champion, will suffer torn ligaments in his knee. Smith, the defending AMA 500cc Motocross Champion, ended up with a fractured pelvis, and Ellis, a former AMA Supercross Champion, injured his shoulder. Of the three, only Ellis would ever win a race again, the '78 High Point 250 National. All are in the AMA Motorcycle Hall of Fame.

Alabama International Speedway, better known as Talladega, hosted a round of AMA Supercross on its infield, very similar to the race held at Daytona the week before. The round is one of just two fully AMA -sanctioned supercross rounds, as a battle between the series rest of the promoters—Michael Goodwin, Allen Becker, Mickey Thompson—and the AMA led them to start their own sanctioning body, dubbed InSport. Only ISC's Jim France stayed with the AMA for his two races, Daytona and Talladega. Later, the schism will be patched up and the record book would reflect a full series of 17 races. But in some old records books, you will find a short list of results on which eventual 1984 AMA/InSport Supercross Champion is not Johnny O'Mara, but rather Team Kawasaki's Jeff Ward, the winner of Talladega and fourth the week before at Daytona.

And check this out: In between the Daytona and Talladega races, the top stars were invited to a new event in the Paris, France suburb of Bercy, and what would soon be known as the Bercy Supercross. The event, organized by the French publishing company that owns Moto Verte magazine, takes place on Wednesday and Thursday, March 14-15, and the supercross-mad French crowd comes out in droves. They practically exported supercross from America, with all of the bells and whistles and U.S. superstars.

Team Honda's Johnny O'Mara won the first night ahead of his teammate David Bailey, and Yamaha's Rick Johnson and Broc Glover, with 250cc FIM Motocross World Champion Danny LaPorte in fifth. The next night O'Mara fell while leading, slipping to third behind Bailey and Johnson. As a result, David Bailey, the reigning AMA Supercross Champion, is also the first King of Bercy.

The Paris-Bercy SX is such a hit that the promoters decide to do another one during the off-season in November that same year, and the race would continue in that slot to this day, attracting riders from all over the world. (The factories hated that the first one was in the middle of the domestic season, but saw the potential in the market.) Bercy also had the effect of showing the rest of the world what supercross is like, and the French in particular—who did not have a single FIM World Motocross Champion to that point—begin churning out a generation of young riders influenced by supercross that become same of the world's best riders: Jean-Michel Bayle, Mickael Pichon, Sebastien Tortelli, David Vuillemin, Stephane Roncada, Frederic Bolley, Christophe Pourcel, Gautier Paulin, Romain Febvre and more.

Here is a French video of the first Bercy Supercross:

In Indianapolis, Jeremy McGrath continued to inch closer to what would be a third straight AMA Supercross Championship, winning this time in the RCA Dome in Indianapolis. McGrath topped a trio of Kawasaki riders: Ryan Hughes, who was actually racing the 125 West Region for Pro Circuit, hometown hero Mike LaRocco, and Mike Kiedrowski.

The TransWorld Dome hosted the St. Louis Supercross and the winners are the two biggest stars in supercross at the time, Jeremy McGrath in the 250 class and Travis Pastrana in the 125 class.