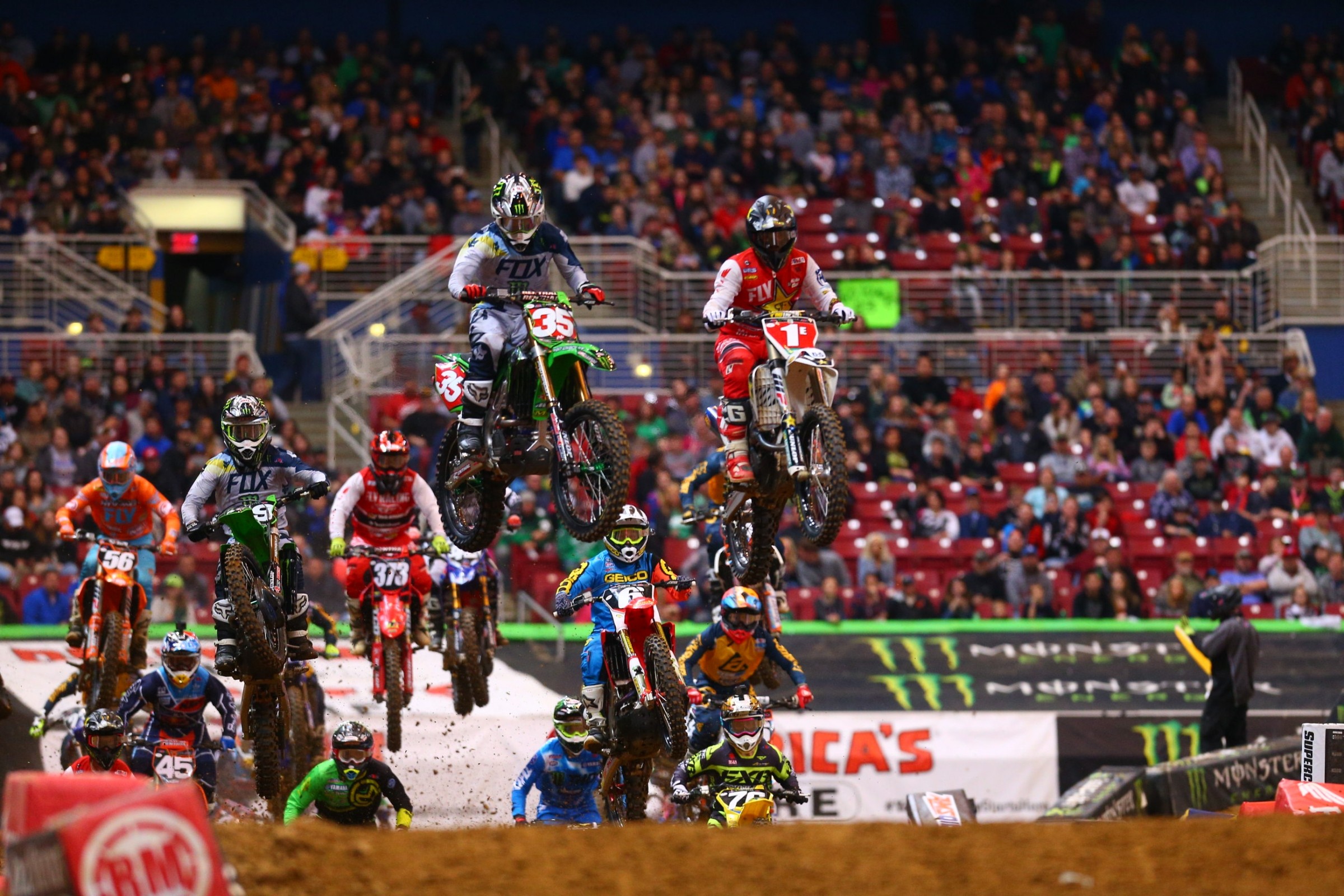 Round eleven of Monster Energy Supercross series visited St Louis, and with it came a return to a more “normal” supercross. Over the previous two weeks, we saw the Triple Crown in Atlanta and the unique Daytona circuit, but things were back to usual underneath the arch. Here are some things you may have missed that happened.

Monster Energy Kawasaki’s Eli Tomac was the man in the dome, it was just that simple. He was the first rider to go 3-3-3 in the rhythm lane before the finish, he was the first rider to jump the triple before the first turn and he was the second rider to quad out the first rhythm lane. After a frustrating heat where he couldn’t get by RM ATV/MC KTM’s Blake Baggett and ended up third, he nailed the holeshot in the main, did the quad, did the 3-3-3 and it was lights out from there collecting his fifth win of the year.

Tomac after the race said that it was the best dirt of the series and he loved the track. Getting out front early was the key as well. "From the start of the day, I just felt like I was on. There's days where you're just on. I felt awesome all day," Tomac said after the finish. "I left my motorcycle alone tonight, went out there, pulled the holeshot and ran away with it...These are the nights we like."

There wasn’t much happening out there in the 450SX main event despite the good dirt and good track. Rockstar Husqvarna’s Jason Anderson started second and rode well, couldn’t keep Tomac in sight but still had a nice gap on Red Bull KTM’s Marvin Musquin. Anderson said that yeah, he’s managing the title point chase but he also wants to win. Anderson gave full marks to Tomac for his ride and rightfully so.

In the 250s, Rockstar Husqvarna’s Zach Osborne and Monster Pro Circuit’s Austin Forkner came into the race tied for the points lead. In a fitting showdown, they started the race 1-2 and the crowd braced for a big battle. Forkner got gnarly and busted out the quad on the first lap to edge ahead of Osborne, and then pulled as much as two seconds ahead. Osborne then slowly began to close back in and got to Forkner’s rear fender. Osborne said after the race that he was content to just put pressure on the co-points leader and see what would happen but before too long, Forkner crashed on a dragon’s back and Osborne rode off to an uneventful win and retake solo possession of the points lead. Osborne, Forkner and Troy Lee Designs KTM’s Jordon Smith were the only 250SX riders to consistently pull the quad.

"I got a really good start finally; that's what I've been needing all year," Osborne said on the podium. "It's just been a matter of me going out there and executing my start, so tonight I did that in the Main Event finally...I'm just super happy to take this win here in St. Louis. It feels amazing. I love this dirt. This stadium is awesome and loud."

As far as Forkner, he got up in fourth, dropped to fifth and then came together with a lapper to set him even further back. He eventually settled for fifth in an eventful night that saw him hit the ground pretty good. He’s now 8 points back of Osborne in the title hunt.

GEICO Honda’s Jeremy Martin won the last Triple Crown main in Atlanta, he finished second in Daytona and this week he backed that up with another second in maybe his best race of the year. Martin kept the Osborne and Forkner in sight early in the main and kept Osborne honest throughout the main event. After a tough start to the season, the last three races have been a nice rebound for Martin who said he’s looking forward to the 250SX East/West Shootout next week.

After his Daytona win last week, Smith got within eight points of the series lead. After a third in St. Louis, he’s 13 back of Osborne. His entire race was settled when he got a poor gate choice for the main due to a crash first lap in the heat race. With the over/under bridge splitting the gate in half, riders on the outside felt like it was pretty tough to pull a start there. (Oddly, in the 450s, Smart Top/Bullfrog Spa’s/MotoConcepts Honda’s Justin Brayton won a heat race but picked the gate right of the bridge.) Smith felt like he rode well but just couldn’t give those riders the start he did.

Some other news and notes from The Lou:

Monster Energy Kawasaki’s Tyler Bowers showed the most speed he had since Oakland (when he ran top ten in the 450 main until a big crash late in the race.) He ran up front in qualifying, eventually finishing sixth then led his heat race until a fall. From there in the main some lingering injuries hurt him and he finished 14th. Early in the main he came together with Chad Reed and knocked the Aussie out of the race. Bowers said he didn’t mean to hit him as hard as he did and that he had reached out to Reed to apologize.

Kyle Peters of the Autotrader JGR Suzuki team had his season-best finish of a fourth and almost won his heat but Osborne got him with a lap to go. Peters said that he had never won a heat before and was bummed to lead so many laps and not take the checkers. In the main he said that he almost had a big one when a rider was down on the landing the first time he launched the quad.

Peters teammate Malcolm Stewart was the first rider to launch the quad and had the quickest time in the third practice, second overall. From there his night went downhlll with a crash in the heat, an LCQ win and a sub-par main with a sore shoulder. Oh what could have been for the Two-Seven.

RM ATV/MC KTM’S Blake Baggett provided perhaps the most action in the 450SX main when he was all over JGR’s Weston Peick for most of the race, a battle that Peick would win by holding on to fifth. Baggett iced his hand after the race and said he hadn’t been able to practice since Atlanta due to the injury. While he’s toughing it out, you can tell Baggett’s form isn’t anywhere near where it was to start the year.

Cooper Webb sat the race out after a mid-week practice crash.

With both Dylan Ferrandis and Colt Nichols out with injury, Monster Energy/Star Yamaha reached out to French veteran rider Thomas Ramette for a fill-in spot and he acquitted himself pretty well with good qualifying times and a solid tenth in the main event.

Following his Daytona win, Brayton looked good again all day and even easily moved forward to win his heat. He didn’t get the start he needed in the main and although he moved forward again, he ended up fourth at the finish.

Monster Energy/Pro Circuit’s Martin Davalos had another rough night in 250SX action. He ran third for a while before crashing back to ninth. That wasn’t the worse part though, as he later flew over the berm at the end of the whoops and crumbled to the stadium floor. He laid there for a bit before walking off. In talking to team owner Mitch Payton after the race, it seemed that he was thinking about letting Davalos sit out next week to heal up.

Baggett’s teammate Benny Bloss scored his third straight eleventh in the main event in front of his hometown fans. Bloss has yet to break into the top ten but has been so close. Outside of Bloss, St Louis was also a home race for Vince Friese, Forkner and sort of for Brayton, who hails from Iowa.