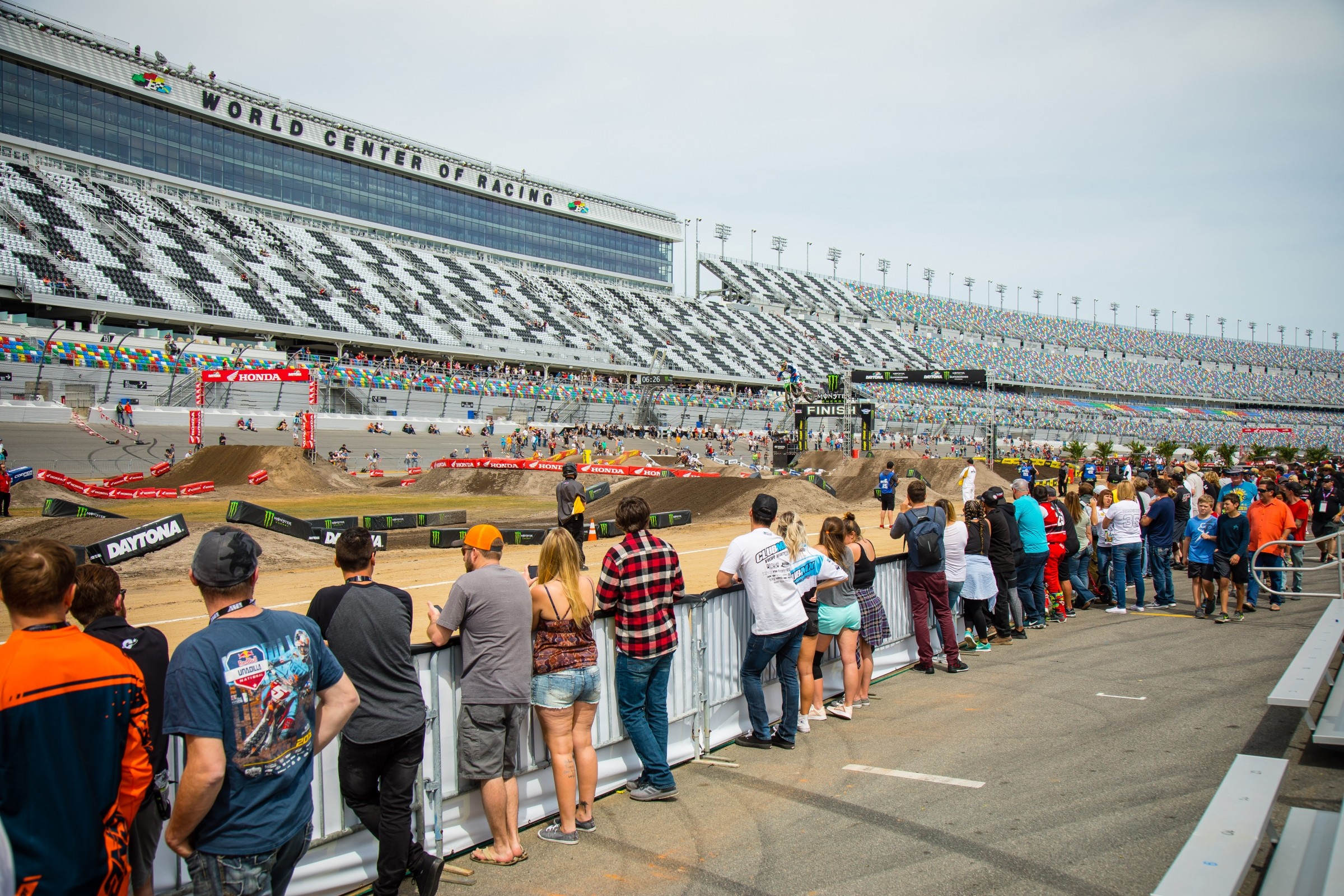 Daytona Bike Week never changes, but it always evolves. This year’s edition left me with the same feelings as always—you see great racing, you hang out with great friends, you get less sleep, and have more fun. Yes, things mostly stay the same, barring the details.

Here’s my experience over the last week in Florida. It’s been good, but I’m glad to finally make it home!

I’ve been a live announcer for the Daytona Monster Energy Supercross since 2008. I also get to host Friday’s press day, which really just means interviewing the riders for videos shown on the big screen Saturday night. I interviewed a dozen riders and learned a lot about the track, preparations during the week, and more. For example, Martin Davalos explained his full list of neck and back ailments suffered in his Arlington crash, which reads like a chiropractor’s dream. Marty’s whole left side is now numb and tingly. Always remember that these dudes are tough as hell.

After doing a separate Christian Craig interview for Racer X Illustrated (the magazine), myself and the rest of the moto media members went inside the press room to solve all the world’s problems. Then Davey Coombs and I headed to the Thor motorhome in the camping area to record our first-ever Racer X Exhaust podcast.

Worst day of the year. See, I announce the pro race on Saturday night, work through the night covering the race for Racer X, and then have to return before dawn Sunday for the Ricky Carmichael Daytona Amateur Supercross. I will not get much sleep, but as a gut punch, this is always the Saturday night where we set the clocks ahead. After fellow Racer X-er Kyle Scott and I are done writing stories and editing videos, it’s 3 a.m., which becomes 4 a.m. due to the time change. I take a deep breath and set my alarm for 6 a.m. Waking up early on Sunday is an airport tradition, but this time it’s too much. For the first time in probably 25 years, when the alarm starts buzzing, I turn it off! I was in a stupor and barely remember this. I woke up again 90 minutes later, at 7:30, and trudged over to the track (now well-rested with a whopping 3 hours and 30 minutes of sleep instead of two hours). Luckily, DMXS Radio’s David Izer had arrived with military precision and took care of the morning shift. I only grab the mic briefly just to appear like a hero to the Daytona faithful—and then head to round two of Amsoil GNCC a little over an hour away.

I love these races. This year I jumped in the announcer’s booth for the RacerTV.com live webcast and announced all day. It was pretty fun. After the race, I talked to some of my old friends and solved some more of the world’s problems. Good times. Then it was back to Daytona to meet up with Jason Thomas for dinner, although when I tried to make fun of JT, some drunk Irish Harley guy thought I was talking to him and tried to fight me. Luckily, we worked it out and solved all the world’s problems.

RCSX for reals. This was main event day. I announced the action and bench-raced with Carmichael himself. We solved all the world’s problems. Carmichael told me that when he was racing, he was sweating it every year his factory contact was up. Yes, The GOAT was actually worried he wouldn’t get a ride! Jeez, how paranoid and crazy are these guys?

“Every day, I was always afraid someone was going to figure it out and beat me,” Carmichael said. “I don’t miss that feeling.”

As for the races, some amateurs won and some lost, but I’m not going to name names because the parents of whoever I don’t mention will get super pissed.

Kyle and I headed to Baker’s Factory. Sounds cool, but it was a damned trap. The riders are onto me! I always start tough questions with, “People have been saying…” so they know the negative opinions are coming not from me, but some random unknowns. Keyboard warriors? Haters? Maybe they’re thinking this stuff, but definitely not me. For example, I’ve probably asked Anderson 20 times, “People have been saying you’re a dirty rider. How do you defend yourself?”

Well, apparently when Aldon asked Anderson, Musquin, and Zacho if I could visit, they replied, “Yeah, people have been saying.” Dammit! Also, lately Zacho just looks at me and mimes someone stirring something up with a spoon. Stirring it up!

We watched Marvin, Zach, and Broc Tickle log a 20-minute moto together. I told Zach people have been saying he rode dirty during that moto.

Aldon gave us a tour of the new wing of the Baker’s Factory property, which houses riders from Troy Lee Designs/Red Bull KTM and Rockstar Energy Husqvarna who work with Tyla Rattray. Something interesting I learned: Aldon has an exclusive deal with KTM and Husqvarna, but that only means KTM or Husky will guarantee a certain number of riders will train with him. He needs four riders to make his main program work (currently that’s Anderson, Musquin, Tickle, and Osborne). If someone quits or retires at mid-season, the team will pick up the remaining tab. That’s the only direct funding Aldon would get from KTM—they’re not sending him monthly checks like you would think. Also, Rattray and the TLD 250 program were not required to use his place—they shopped other Florida facilities, too, before deciding to go with Aldon. I’ve learned Aldon is as paranoid as the riders. After training guys to so many titles, you’d think his role in this industry is set, but he feels like every day could be his last, and you’re only as good as your last race.

He’s paranoid like Carmichael. These guys are nuts, but that’s what keeps them motivated.

The plan was to go to Blake Baggett’s for our annual tour of El Chupacabra Ranch. But Blake was rehabbing his wrist and wasn’t available. Time for evasive action. I know where most of the riders live in Clermont, Florida. I know there’s a lake nearby. I know they usually cycle around 8 a.m. every day. So, at 8:15 a.m. I went for a run around the lake. Like clockwork, I saw them—four road bikes coming around the corner. They instantly started yelling, “Hey, that guy has a Racer X shirt… wait, that’s Weigandt!”

The group was Christian Craig, Adam Cianciarulo, Chase Sexton, and trainer Blake Savage. My plan worked! We chatted for a few (probably ruining their heart rate data) and Savage told me he’d be going on a run with Ken Roczen later, and I should join them. But could I really keep up? Blake said the magic words “it’s our slow day” and I was in. Everyone then made fun of me for probably buying cheap running shoes, and they took off.

Back at the hotel, Kyle and I typed up some stories and then headed to Roczen’s house for a 1 p.m. “slow run.” Kenny told me the pace—around 8:30 per mile, but not the distance. Would we be doing 3 miles? 5? 15? 20? Meanwhile, Savage (the trainer) started nervously asking questions like “So, uh, do you run a lot?” He was definitely scared I would blow their training day by forcing them to go slow.

Well, it was fine. We kept to the 8:30 pace, which isn’t very fast, so Kyle and I were able to keep up. We also only did six miles, and I mean only, because Ken said on Friday before Daytona, he ran 11!

I did keep their heart rates up by engaging them in conversation through the entire run. Hey, it’s what I do!

Headed to The Moto Sandbox to watch AC, Craig, and Sexton ride. Roczen also showed up and gave great pointers to Craig, who is filling in on his Honda HRC 450. Want to know something amazing? Roczen suggested Craig slide his forks up one millimeter. Craig tried it. Within one lap, Roczen said, “Oh, you can tell that made it too low in the rear.” One millimeter! Roczen could tell the difference just watching!

These visits to the track are always fun. Riders talk a lot of trash between sessions, so you better be armed with some comebacks because they’ll come after you. There’s so much gossip and so many opinions on so many things between these motos. It’s great bench racing, just like you do with your buddies while sitting on the tailgate between sessions.

Just past noon, I headed back to Daytona to watch the Thursday night Daytona TT American Flat Track opener. I announce this series with Ralph Sheheen for NBCSN, so the opener is a great place to bro-down with riders and get the latest scoops. We solve more of the world’s problems, we talk more trash. It’s a pattern I’ve grown very accustomed to. Dan Bromley won the AFT Singles class and Jared Mees held off road racer JD Beach to win the AFT Twins class. The track and the racing was improved over last year’s Daytona TT debut. They’ve been racing flat track near Daytona forever, but moving the track inside the speedway makes for a new version of the tradition.

Along those lines, I headed back to the media center to type up this story and a few more pieces for Racer X Illustrated. Another late night at the track—a Daytona Bike Week tradition, followed by a meeting at Daytona Ale House to do some more bench racing with friends. Daytona can evolve, but it never really changes.