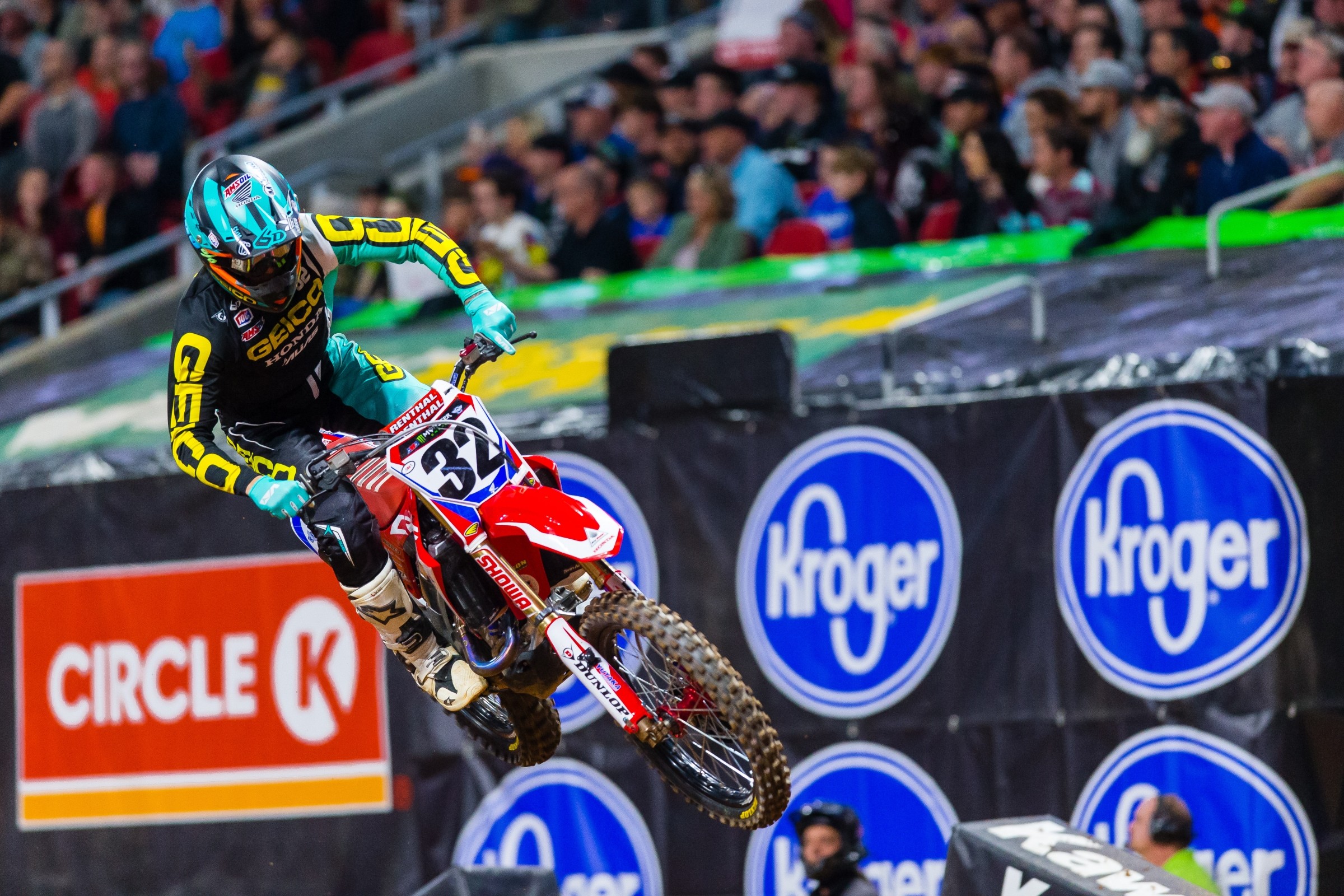 After a wild night in Daytona that saw Zach Osborne come from nearly dead last to take fourth, we now have a tie for the lead between Osborne and Austin Forkner. And who better than Osborne and Forkner to be tied for the lead? Osborne isn’t exactly popular with the Monster Energy/Pro Circuit Kawasaki crew, and he wasn’t thrilled about Forkner’s move in Atlanta that caused the two to collide mid-air, which resulted in Osborne tumbling to the ground. These two already want to beat each other, and the fact that whoever finishes in front of the other will more than likely take sole possession of the points lead makes this matchup even more interesting. —Aaron Hansel

A lot of the 250SX East points focus is on the tie for the lead between Osborne and Forkner, but Jordon Smith, who took his first win of the season last week in Daytona, is right there, too. After making significant gains in Daytona, he’s just eight points back of Osborne and Forkner. We’ve seen Smith get hot before—last year he clicked off a pair of wins on the heels of a podium—and if he keeps rolling in St. Louis, he could make what’s already a tight points battle incredibly close. —Hansel

Due For a Win

If you take a look at Tomac’s results, you’ll notice a pattern has emerged. Every two races, he wins two in a row. After winning a pair, he’ll lose two races. The cycle then repeats itself. Well, he hasn’t won the last two, which means he’s due for a win this weekend. Historically, he’s not outstanding in St. Louis—his 450SX average finish is 5.8—but he did win there last year. Will he keep his pattern intact this Saturday Night? —Hansel

So Far, So Good

Christian Craig has been pretty good since taking over the fill-in role at HRC Honda. He led laps in his debut ride in two of Atlanta’s three Triple Crown races and ended up fifth. After briefly battling for the lead in Daytona, he improved his final finishing position to fourth. That’s excellent, especially considering he just recently stepped up to 450SX after racing a 250 all season. We’ll see if his progression continues in St. Louis. If it does, he’ll be on the podium. —Hansel

Justin Brayton made that saying ring true, literally, when became the oldest racer to ever win an AMA Supercross race last week in Daytona at 33 years old. He did it in grand fashion, too, by leading seventeen of eighteen laps. It didn’t come easy, though—he had to keep it together on an extremely rough track and had to withstand the mental pressure of knowing Eli Tomac was closing fast late in the race. So, where does Brayton go from here? On the box in St. Louis, or even on top of it again? Brayton turned 34 this week, so if he does take another win, he’ll set yet another age record and be the oldest rider to ever win two in a row. —Hansel

Remember in 2011, when Monster Energy Kawasaki plucked a little-known French rider named Fabien Izoird to fill in for the injured Jake Weimer? I bring it up because earlier this week, Monster Energy/Yamalube/Star Racing Yamaha selected a little-known French rider named Thomas Ramette as a fill-in for the injured Colt Nichols and Dylan Ferrandis. Both Ramette and Izoird have a similar pedigree. Both are multi-time champions in arenacross in Europe and competed briefly in Monster Energy AMA Supercross prior to getting factory fill-in rides. Izoird was okay during that 2011 season, his best finish of 11th coming in Jacksonville. This is a big opportunity for Ramette—will he take advantage? —Chase Stallo

We talked about this last week, but after Baggett struggled at Daytona—a track at which he typically does very well—it’s worth examining again. It was clear Baggett was not 100 percent last weekend. He didn’t look like the same rider we’ve seen the last couple weeks and rode to a lonely ninth. Not helping matters is that Daytona is far and away the roughest track on the body in supercross. Not the greatest race to be dealing with a wrist injury. We’ll see if a milder track this weekend will help Baggett’s sore wrist. —Stallo

Monster Energy/Pro Circuit Kawasaki’s Martin Davalos told Jason Weigandt prior to Daytona that he’s still dealing with the effects of his crash in Arlington. Suffering from neck and back problems, Davalos said his entire left side is numb and tingly. Yeah, that doesn’t sound fun. Davalos is still performing well, though, putting in two top-five finishes in the last three rounds and leading laps in Atlanta. Davalos certainly isn’t 100 percent entering the weekend, but he’s shown he can still run up front. —Stallo

Through ten rounds of 450SX, we’ve already seen four different winners, with Jason Anderson and Eli Tomac tied at four apiece for most in the championship. Blake Baggett was a threat before his wrist injury, but is more of an unknown now. The most likely candidate who has emerged is Cooper Webb. Over the last few weeks, Webb has looked like a totally different rider and appears to be hitting his stride. He’s also ruffling a few feathers along the way. Can Webb finally capture that elusive first 450 win this weekend? —Stallo