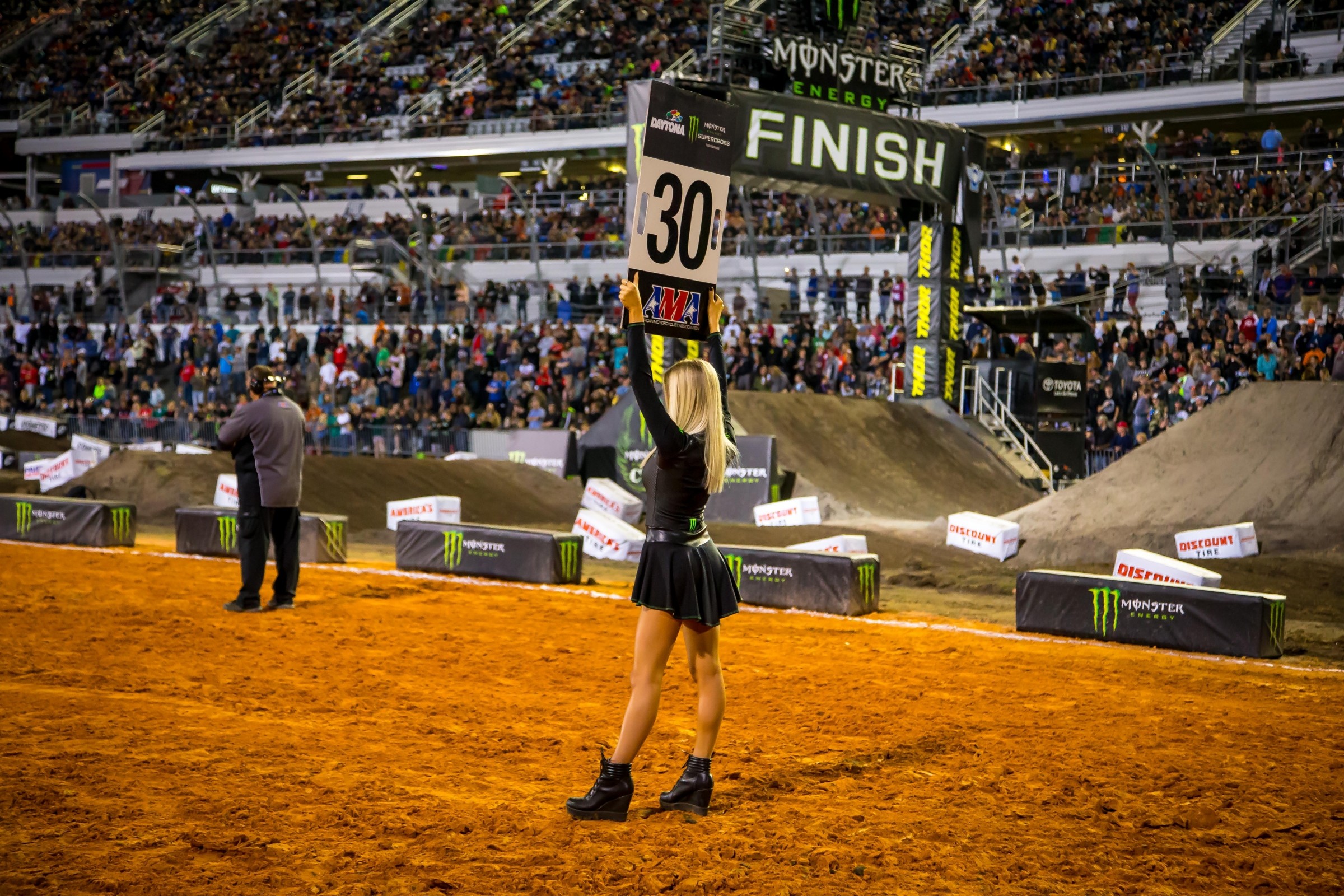 The most unique race and possibly the most prestigious single race of the year was filled with drama in both classes and was definitely a night to remember for more than a few riders.

Justin Brayton was able to get his first 450SX main event win of his career at just under 34 years old, making him the oldest rider to win a main event. Eli Tomac made it tough on him, though, as he found his groove after going down on the first lap and charged all the way up to within a few seconds of Brayton.

In 250SX, Jordon Smith got his first win of the year and pushed himself up into championship contention, as he sits just eight points behind Zach Osborne and Austin Forkner, who are tied at 89 points.

Part of what made this year's Daytona Supercross so exciting were the comeback rides by Osborne and Tomac.

In the 250 main event, Osborne got an absolutely terrible start after getting cut off by Forkner. He came around the first turn nearly dead last and had moved up to 14th place by the end of the first lap. By the end of the sixth lap, he had made his way inside the top five.

Below are Osborne's lap times plotted out compared to Forkner's (whom he was chasing in the championship) and Jordon Smith (who was leading the race). You can see once he finds his groove and some room on the track, he knocks off huge chunks of time to the leaders.

In 450SX, Tomac put on an even more incredible show. After getting a mid-pack start and then going down a few corners into the race, Tomac was in last place after the first lap. It only took him five laps to get all the way up to tenth place (passing Jason Anderson in the process), and by lap 15, he was in second place.

After the race, Tomac gave credit to the track design for allowing him to come through the pack so quickly. "At the end zone corner there at the first lap, I just got hung up at the top of the berm and then had nowhere to go but to really fall down. I lost my balance. I actually looped out my bike. It was pretty sketchy for what it was. Then after that, it was just making the charge. The good thing is, this year’s Daytona allowed for some good passing. There was long straightaways and lanes and jump combos you could do different. In that way, it was good. At least we were able to make something out of it."

With three laps to go it looked like Tomac was going to do the near impossible and pass Brayton for the lead, but Brayton was able to drop his lap times by almost a second to nearly match Tomac's times on a very tough Daytona track. Hats off to these two for some incredible rides.

This year's Daytona SX saw a format change from last year, as the race conformed to the rest of the series and went to timed main events instead of laps. Since Daytona's lap times are typically over a minute long, we were pretty confident that we would see shorter main events, and that is indeed what happened.

The 450 main event was exactly two minutes shorter than last year's, and it was also two laps shorter. But it was still the longest race so far this year and there was still plenty of time for the track to break down in typical Daytona fashion. Would Tomac or Osborne have liked two more laps, though? Of course they would!

A storyline that might get lost in the shuffle because of Brayton's first win and the other great rides mentioned above, is the huge missed opportunity by Marvin Musquin. When he passed Brayton for the lead on lap four, he had cut his championship points deficit to Jason Anderson to 27 points after coming into weekend down 42. We all knew it wasn't going to stay at 27, as Anderson was working his way through the pack, but we didn't expect Musquin to go down twice and gain only two points. It just goes to show that anything can happen over the course of 20 minutes.

After the race, Musquin said, "You got to take the positive [of finishing fifth after two crashes]. But at the end, I could have done it a lot better, but that’s racing."

Take a look at Musquin's championship points deficit to Anderson for each lap of Daytona.