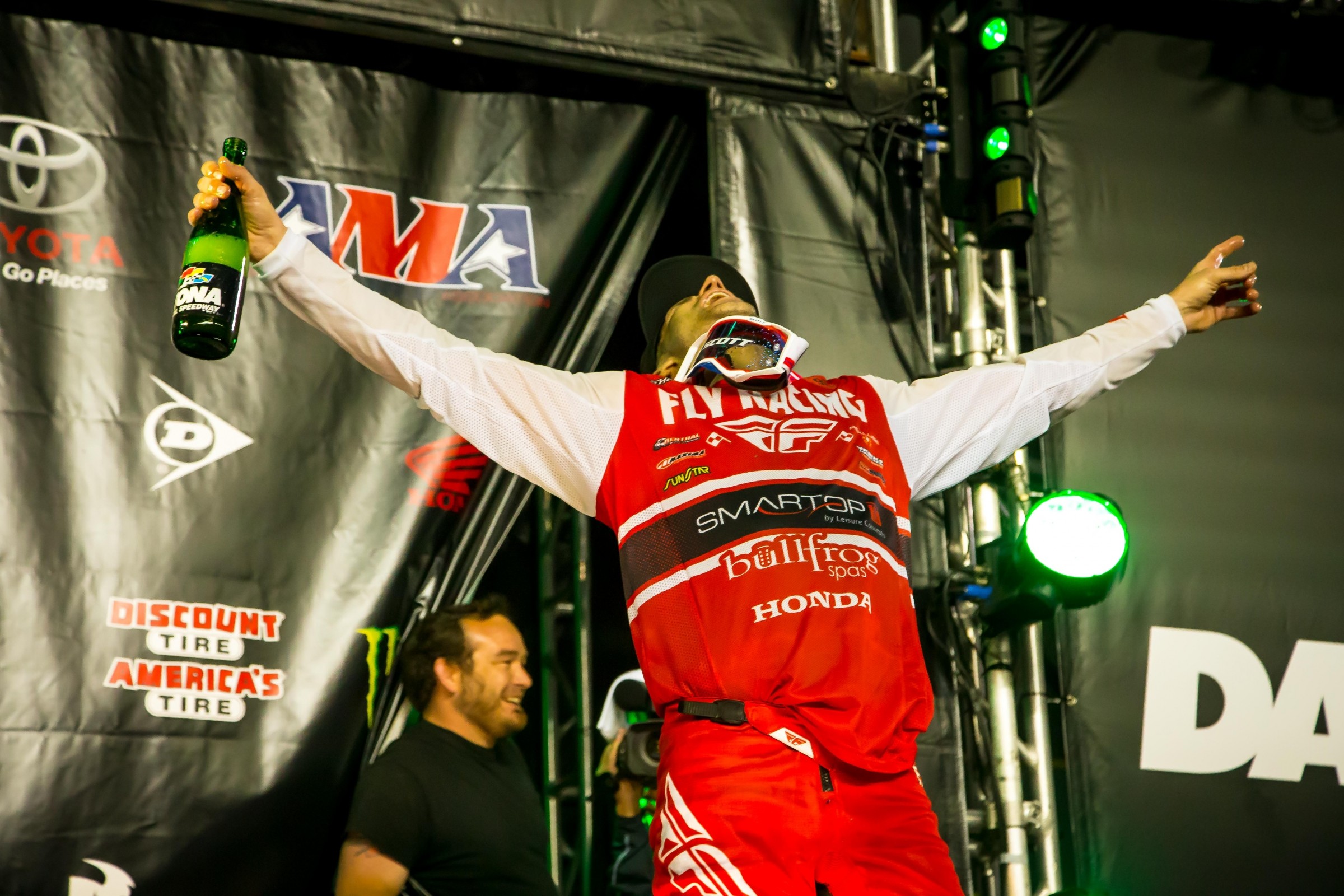 Daytona was good, plain and simple. In both classes we had new winners for the first time in 2018. Both One of them, J Smartop/Bullfrog Spas/MotoConcepts Honda’s Justin Brayton, got his first ever American supercross win ever, in either class. Turning 34 years-old next week, Brayton broke Mike LaRocco’s record of oldest rider to win a premiere class main event tonight. He did win a “main event” at the first of the triple crown last week in Atlanta, but it doesn’t count as a race win just like a moto win doesn’t count as a race win in outdoors—it’s the overall score that is credited as a race “win.” Brayton who is a supercross only rider now doesn’t consider himself a good rider at Daytona as it is more of an outdoor style track. On the podium tonight he said that he normally just shoots for a top ten here. He also told Jason Weigandt that he doesn’t even typically practice on a Daytona style track like most of the other riders leading up to the race and just tries to survive the race. “There’s so many emotions that go with it,” said Brayton. “Number one it’s Daytona, I would have never expected that. Daytona is more of an outdoor track, but Ricky (Carmichael) did an amazing job with this layout. Made for a lot of different lines. I knew that I had to put in really good laps at the beginning with that start. Got a gap and tried to manage that gap. Once Eli got him there were like four laps to go, and I was like “Oh boy, here it comes.” I put in a few good laps. I knew at the end of the race you could only go so fast; the track was so rough. Put in a few good laps and that was it. Crazy.”

It would have been epic for Monster Energy Kawasaki’s Eli Tomac to come from last to first, but he didn’t seem super mad about ending up second behind Brayton. “First lap, just got hung up on the top of the berm, just had nowhere to go and lost my balance. Actually looped out my bike. The good thing us this year Daytona allowed for good passing, long straight aways and lanes and jump combos where you could do some, good, in that way it was good, at least we were able to make something out of it.” Daytona switched from the 20 lap 450 class main event to match the new supercross format of 20 minutes, plus one lap (Daytona is not a Feld race). They completed 18 laps tonight, Tomac probably wishes he had two more to catch Brayton right about now.

Monster Energy Factory Yamaha’s Cooper Webb keeps improving, not only getting his first podium of the season but even briefly looking like a challenger for the win. Webb got to second and made a brief charge on Brayton, but couldn’t sustain it, and then Tomac got him. This was actually Webb’s first pro race at Daytona—he always raced 250SX West and then missed last year’s 450 race with an injury. “It lived up to the hype, it got real rough,” said Webb. “I came here as a kid and watched it with my dad, and I did the amateur race here. It’s nice to get my first overall podium of the year, and I felt like I had a good main event.”

Another great 450 ride for Honda HRC’s Christian Craig. First he won he heat race and then he fought with Brayton for the holeshot before locking it down in the main. Brayton got him back, but Craig was able to improve on his 450 season debut last week in Atlanta with a fourth tonight. Craig rode a solid race for the rest of the night.

It was a chaotic night all around for points leader Rockstar Energy Racing Husqvarna’s Jason Anderson—and that’s the kind of stuff he wants to avoid. In his heat race, there was somehow a tuff block kicked onto the track on the very first lap, and he hit it and went tumbling. From last, he dug deep to get to ninth and just qualify for the main. This left him with a bad gate pick in the main event and a mid-pack start, then he ran into the rear wheel of Vince Friese and crashed, sending him way back. Anderson did an okay job salvaging a seventh, but it wasn’t an epic night for the points leader. After the race Anderson said, “It was sub-par to say the least, but was able to walk away with minimal points damage. Not too bad though… I didn’t completely screw it up. Honestly from my crash in the heat race I was kind of sore. I was just trying to manage the race and get as many guys as I could safely because I didn’t feel that strong out there. I’ll be good for next weekend.”

At one point, Anderson’s early crash seemed like just the break Red Bull KTM’s Marvin Musquin needed to try to tighten the points chase. While Anderson was in the back, Musquin briefly looked like he might win the race, and he got past Brayton to take the lead. Moments later, he threw it away with a big crash by the mechanics’ area. A lap later, he was down again in a sand turn. Anderson nearly caught him at one point but he got away to finish fifth to Anderson’s seventh—but it was a golden opportunity to make up a lot of ground in the standings. “I was the fastest, but the fastest guys never always win. Made a mistake, almost looped out on the wheel tap on the kicker of the double. I did it in the heat race, but I don’t know what happened in the main… Two crashes like that. I was in a bad position and came back to fifth so I saved a lot. Some good points, but tonight was my race to lose.”

JGR AutoTrader.com/Yoshimura Suzuki’s Weston Peick split Marvin and Anderson with a sixth. He started fourth and then ran third briefly behind Brayton and Craig. He didn’t have the stuff to hold off Webb or Musquin, but sixth continues his solid, consistent season. “Considering what I went through last weekend my body is a little banged up and sore; my legs, shoulder, ankle, heal. And then I got sick on Wednesday so I was trying to survive this weekend. Obviously Daytona is pretty brutal and it’s not the easiest track. Obviously got a pretty good start, I was running about third for about half the race or something like that. I tried to hold it together as much as I could. With being sick and sore from last weekend I had to back it down and ride it in there and do the best I could.”

“I just been kind of building every race this year and fixing the things that I’ve been struggling with from round one and on and on. Everything kind of went together here tonight and I felt really good,” said TLD/Red Bull KTM’s Jordon Smith in the press conference after the race. Smith got his first win of the year tonight and as he said was able to put it all together. He had serious pressure from behind from Jeremy Martin at the end of the race, but Smith did get the holeshot and lead every lap in the main. He is now only eight points behind Zach Osborne and Austin Forkner in the championship who are now tied for first going into St. Louis.

Monster Energy Kawasaki’s Austin Forkner came into Daytona with a lot of momentum having won the last two races. He picked up where he left off by qualifying fastest in both timed practice sessions. He got a bad start in the heat and had to come through the pack to finished third, but he was still the fastest rider on the track. In the main he got a decent start around fifth, but after making his way to third that’s where he would stay not really gaining or losing any ground. After the race he said, “It was hard to really make up a lot of time. You kind of had to slowly try to chip away and obviously grenade yourself.”

“In the main event I got a terrible start, started pretty much last” said Rockstar Energy Racing Husqvarna Zach Osborne. “Rode what I think was a really, really good main event to come back to fourth. Can’t be too, too disappointed with what I did tonight. Just going to keep plugging away until St. Louis.” Osborne was nearly last on the beginning of lap one, but was able to make his way to eighth in less than five minutes and didn’t stop there. He put on a charge that resembled his Las Vegas race last year where nothing was slowing him down, except for maybe some lappers, which there were a lot of in the 250 main. Ultimately, he just ran out of time; he was closing the gap on Forkner in third until the checkered flag waved. Osborne and Forkner will both be running the red plate with their current tie in points.