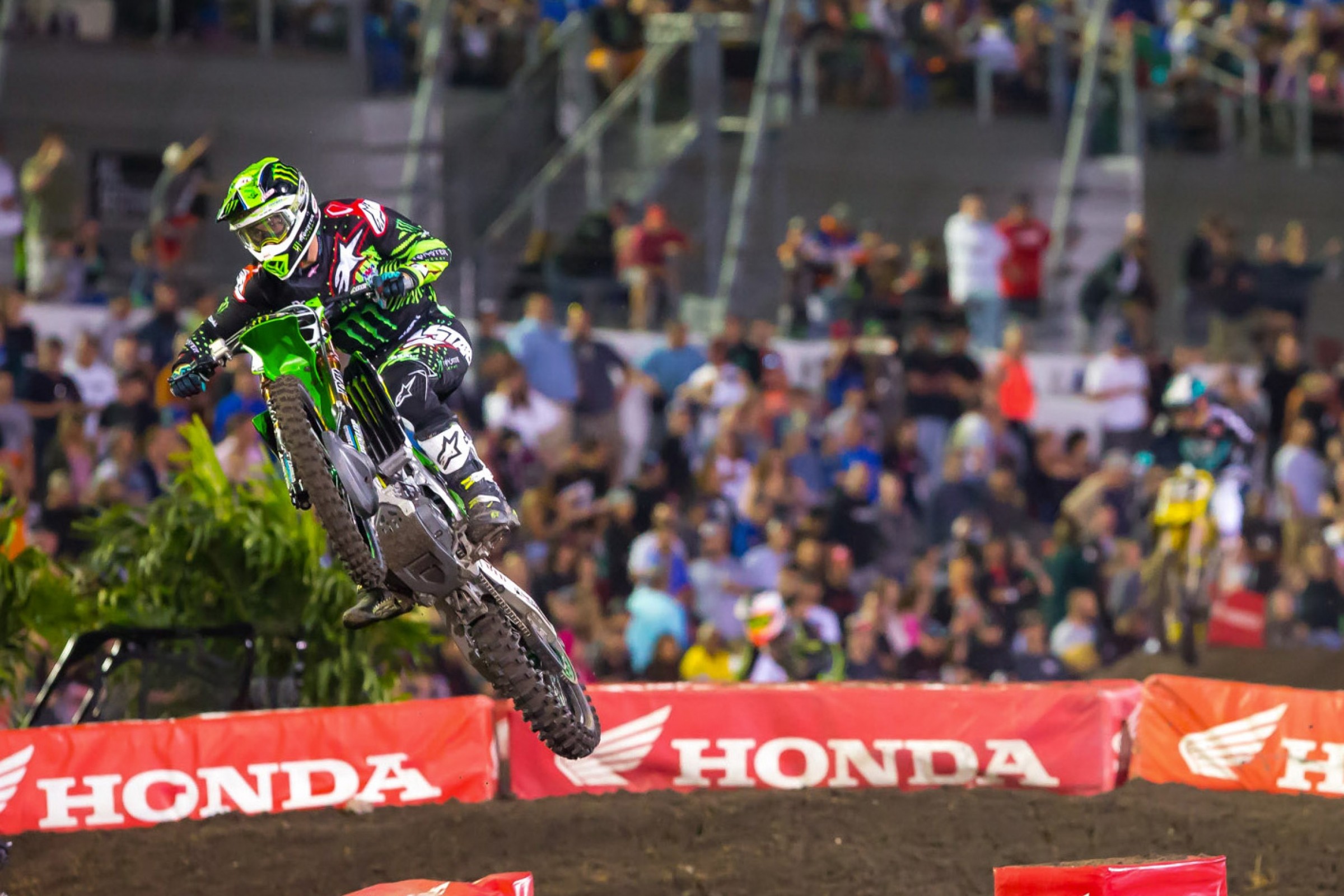 Last Saturday Osborne and Forkner came together in the air, but it wasn’t the first time Osborne has had an on-track incident with a Monster Energy/Pro Circuit Kawasaki rider. He traded paint with Adam Cianciarulo during qualifying last year, and who can forget the incident in Las Vegas when Osborne put Joey Savatgy on the ground on the last lap to clinch the 250SX East Region Championship? Making things even more interesting, Osborne and Forkner are in an extremely tight points battle right now (Osborne leads Forkner by two), and if leftover feelings from Atlanta creep into Daytona, it could have a drastic effect on the championship. —Aaron Hansel

No supercross race is easy, and anyone who says 20 full-out minutes (in 450SX) plus a lap on any track of Monster Energy AMA Supercross is no problem clearly hasn’t done it. That said, some tracks are more physically demanding than others, and that’s especially true of the sand and loam racing surface of the Daytona Supercross. The track is incredibly demanding—it breaks down, develops huge ruts, and gets extremely rough. Not surprisingly, it’s viewed as the most motocross-like supercross race on the schedule and can present real challenges for riders searching for the right setup. We’ll see who nails it this weekend. —Hansel

Last Saturday Justin Brayton put an exclamation point on what’s been a great season so far by winning one of Atlanta’s three Triple Crown races. He ended up fourth overall and now sits fourth in points, just six behind Blake Baggett in third. Depending on how things shake out in Daytona (and the severity of Baggett’s wrist injury), Brayton just might propel himself to third in the points. And given how solid he’s been lately, it wouldn’t be entirely surprising to see him land on the podium. He’s been there seven times in his 450SX career. Can he make it eight? —Hansel

Jordon Smith is fast. We’re not talking cheap, store-brand fast either—if those generic orange marshmallow peanuts are fast, Smith’s a big sack of Skittles. But for some reason he often gets overlooked, which makes no sense because he won a pair of races last year and had the 250SX East Region championship firmly in hand before crashing out of the finale in Las Vegas. Well, don’t look now, but Smith just nabbed a podium (third place) at Atlanta, which also happens to be his best finish of the year. If he starts heating up, he can win races. Might this be the beginning of a hot streak for Smith? —Hansel

RJ Hampshire is doing well—he currently sits third in points—but he’s got to be wondering what he did to anger the moto gods. He’s been tantalizingly close to a podium all year, finishing fourth at all three of the 250SX East Region races so far, despite being in position to land on the podium multiple times. Heck, he even led laps in Arlington and Tampa! Can he break through for his first podium of the year or find himself in fourth for the fourth straight time this season, or worse? —Hansel

This should come as no surprise to anyone, but Eli Tomac is good at Daytona. Like, really, really good. In four career appearances at the historic venue in 450SX, Tomac has gone 1-1-2-4, which includes consecutive wins in 2016 and ’17. Not shabby. If you’re a betting man, the odds are certainly stacked in Tomac’s favor this weekend. Can he make it three in a row? —Chase Stallo

Prior to the start of the 2017 Monster Energy AMA Supercross season, Feld Motor Sports announced that timed main events would be coming to 16 of the 17 rounds. Daytona, which is NOT a Feld event, decided to stick with the traditional 20 (450) and 15 (250) lap main events. That will change this year. Daytona will move to timed main events—20-plus one in 450 and 15-plus one in 250—this Saturday. Looking back at the last four years, it doesn’t appear it will make much of a difference, as the average 450 main event time has been either 22- or 23-plus minutes. —Stallo

Despite injuring his wrist in the third 450 main event at Atlanta, Blake Baggett is going to give it a go this weekend. Earlier this week we heard from Forrest Butler, team owner of Rocky Mountain ATV/MC-WPS-KTM, and he told us Blake's wrist is sprained and sore but he's going to try to tough it out. "It's sprained and hurt, but should be a tough-through-it issue," said Butler in a text to us. Baggett was able to ride this week, but Daytona is the roughest track on the supercross circuit, so we’ll see if his wrist can withstand 20-plus minutes on Saturday. —Stallo

Christian Craig looked good in his 2018 debut ride with Honda HRC at Atlanta. The GECIO Honda rider led laps in two of three main events—11 laps total—and finished fifth overall. It was a strong performance for a team that was in need of something positive after losing Ken Roczen and Cole Seely for the remainder of supercross. This week, Honda announced that Craig would stay on the team for the remainder of supercross. With another week of testing under his belt, we’ll see if Craig can challenge for a podium this weekend. —Stallo

Hansel mentioned how rough the track can get, and while this isn’t exactly “something to watch for,” it’s cool, so I’m sharing. Daytona sent out some numbers behind the construction of the track last week, and they are pretty cool. Check them out below. —Stallo

12: Trucks used to transport the dirt into the speedway

2: Days to bring all of the dirt into the track

3,200: Length in feet of the supercross course