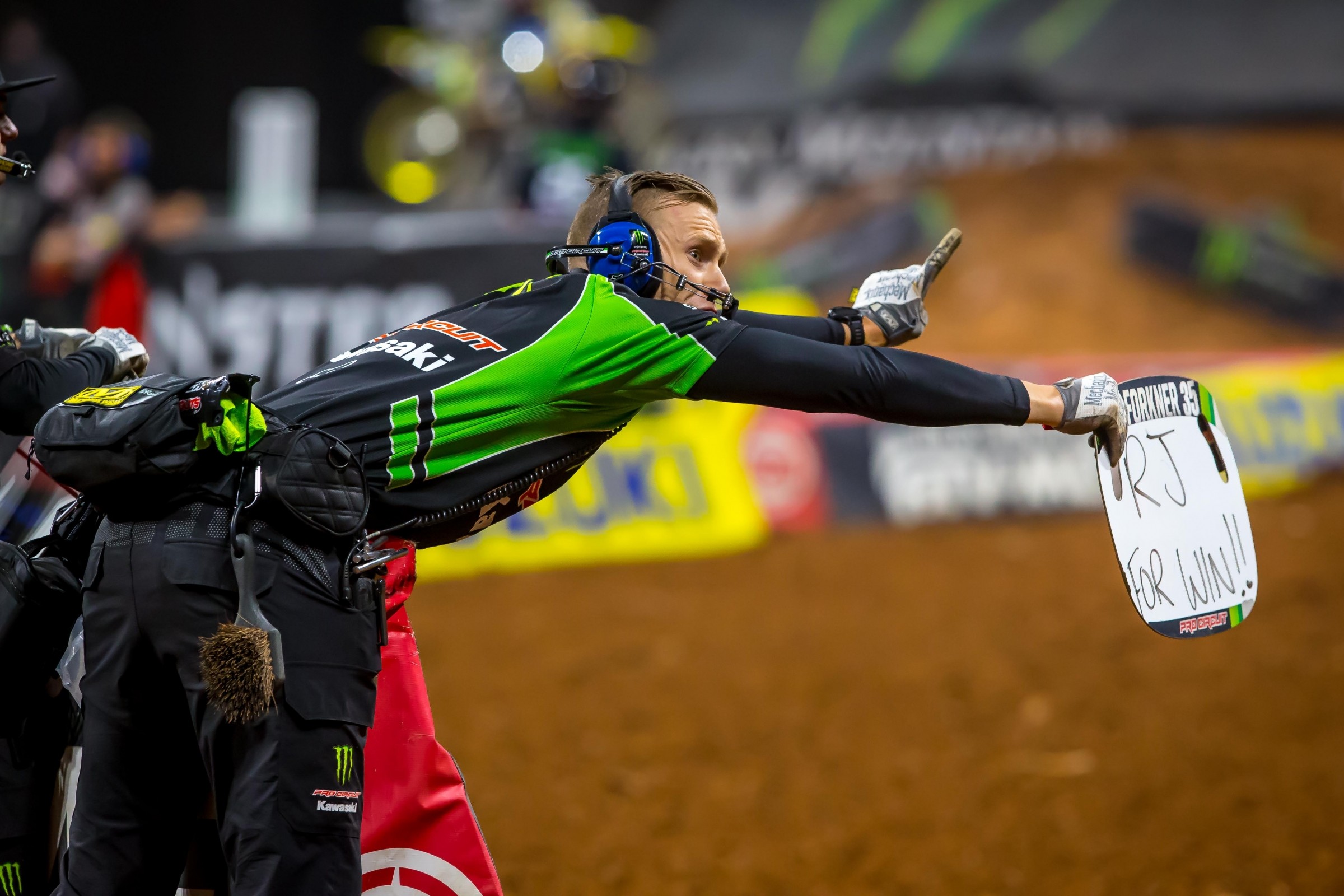 The second Triple Crown race of the 2018 Monster Energy Supercross season is in the books, and with some slight adjustments, like longer first motos, the program flowed better and the racing was as good as ever.

In six main events between the 450 and 250 classes, we got to see six different riders take the checkered flag. One of those riders was Justin Brayton, who held off a slew of riders to take home the first 450 moto. Jason Anderson would take the overall win later in the night, though.

In the 250 class, Austin Forkner won the overall with 4-2-3 scores while Zach Osborne placed second with scores of 1-3-5. With his win, Forkner sits only two points behind Osborne in championship points.

Let’s dive into the lap data to figure out how these races were won and lost with this week’s Sign of the (Lap) Times. First, a bunch of our traditional lap time charts.

The first 450 race of the night was about as good as you can get. Christian Craig led for the first half of the race but was then passed by Brayton, Jason Anderson, and Blake Baggett on the same lap. Brayton then turned consistent laps out front while riders stacked up behind him and jockeyed for position, and he was able to take the checkered flag.

Anderson commented on the hectic race in the post-race press conference: "I started behind Brayton and Christian [Craig]. I felt like for me, I was playing defensive and trying to pass them at the same time because I had three of the fastest guys that I’ve been racing against—Eli, Marv [Musquin] and Baggett. They want to get by me and pass those two, and I want to pass the guys in front of me, but the track was a little bit like heat race-smooth. It’s harder to pass them because I feel like they were riding good and attacking the track just as good as we were behind them."

Take a look at the lap times from the top five in that race.

I made the chart below with the intent to see how much the track was breaking down over the course of the night, but instead I think it shows how Anderson went into protection mode about halfway through the last main event.

Looking at his lap times for all three motos, they are pretty similar up until lap nine of the third moto. On that lap, his times shoot up by about a second. This is also when he started losing positions and looking behind himself over every triple.

For the past few weeks, the top 250 riders and 450 riders have actually been pretty close in lap times. I decided to see how Osborne and Brayton stacked up against each other in the first moto since the track was probably most comparable at the start of the night.

Osborne was actually putting in faster laps than Brayton when the track was fresh and the lines were breaking in, but Brayton maintained his pace for longer and even dropped his times at the end of his moto.

Lap times are obviously not the be-all, end-all when debating between the two classes, but I still think it's interesting how comparable they are. Take a look.

We talked to Webb last week about the progress he's made from the beginning of the year, and although he's satisfied with his improved results, he still knows he'll need to be better if he wants to contend for wins.

"I’m obviously not quite up to these guys yet, but I feel like in practice I’m right there, but I need to be a better racer," he said. "Maybe I’m being a little bit conservative. Hey, it’s all good, I’m getting better every weekend and getting more confidence. Making small steps, and now we’re right there knocking on that podium. I think the three guys that are up there tonight are great riders and they’re really pushing that edge. I need to be better."

Supercross wasn't the only high-profile moto event happening last weekend, as the FIM Motocross World Championship kicked off with the MXGP of Argentina. In the first moto, Antonio Cairoli and Jeffrey Herlings picked up right where they left off last year and battled all the way to the finish. Only 1.075 seconds separated them when they crossed the finish line. Take a look at their lap times for the first moto.

They continued their battle into the second moto, with Herlings making a last-lap pass on Cairoli to grab the overall win. If you haven't payed attention to MXGP in the past, this season might be a good one on which to start because these two look like they're going to give us one hell of a season.