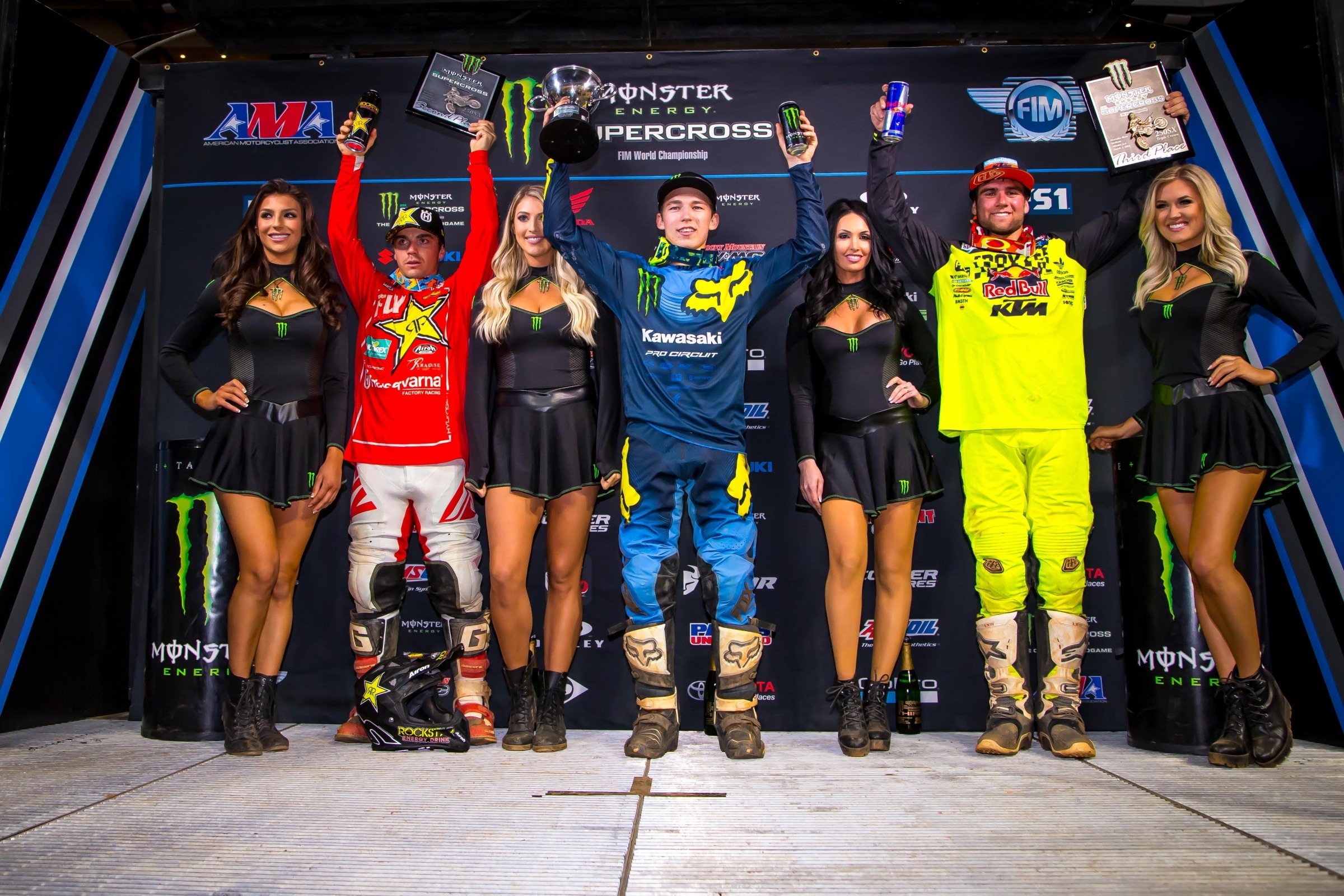 Racer X: This was you guys’ first Triple Crown. You saw it at Anaheim earlier in the year, but this was your first chance to experience it. Just kind of take us through not only the day and the qualifying but also through the three main events.
Zach Osborne: When I watched it on TV I was like, why is there so much downtime? Then tonight I’m like, holy crap, this is a quick turnaround. I enjoyed the format. I think it’s really cool. I think it’s a good change. It’s a lot of racing. It adds another start. I don’t think our mains are normally quite as rutty and gnarly as what it was tonight, but all in all, I liked it. I thought it was a really good little deal.

Austin Forkner: It was definitely quick, much quicker than it seems on TV. I thought it was definitely I wasn’t really bummed with that fourth in the first moto because I knew it was just about consistency. The last time they had it, it was like one, five, three and that one. So I knew that if I could get consistent top-five or top-three, then I would be on the podium just with how kind of inconsistent, at least the first Triple Crown race was. That was just my goal. I got top-five every moto.

Jordon Smith: Like they said, it’s a pretty quick turnaround in between the motos. It’s a lot quicker than it seems on TV. That was pretty tough. The track was, I think, a lot better than the first Triple Crown. It was pretty demanding tonight. It was a tough track. It got really rutted and pretty gnarly out there.

Forkner, take us through losing the lead on the second moto, and take us through relinquishing that lead and then coming back from that.
Forkner: About halfway in I clipped a bunch of Tuff Blocks in that first rhythm section after the start and ripped my rear brake off, so I had no rear brake. At that point, I was just trying to salvage as much as I could. I was just trying to finish the moto and try to get a top-three. I knew Zach was coming and I knew that Martin (Davalos) was coming too. Me and Zach ended up getting together and then Martin just got me on the last lap. There was really nothing I could do. He just had the inside and I couldn’t even stop. I almost crashed by myself just because I ran into the Tuff Blocks because I didn’t have a rear brake. That one was tough. Just had to try to rebound from that. I was pretty frustrated with that one, so I just kind of let that fuel the fire.

Zach, in the second main you were coming in on Austin there. Were you setting him up for a pass or did you just kind of catch up to him a lot faster than you expected to?
Osborne: I haven’t seen the video yet. I don’t know really what happened. It was just unfortunate.

Osborne, you had a heck of a night. You won the first race, then you went three and five. You knocked down, kept getting yourself back up. Take us through the determination to keep that red plate.
Osborne: Yeah. It wasn’t even really about the red plate, just that’s my style. I get up and fight for everything that’s there. It was unfortunate that I went down on the first lap in the last main. I had a decent start. My first two starts were really good. Just got tangled up in that one little pileup before the triple. I managed to come back to fifth. It was a little bit disappointing to lose it on the last lap to circumstances out of my control, but it is what it is. It’s a good night and we’ll just keep plugging away.

Jordon, you actually had the overall lead in that third race. I don’t know if you even knew that. Take us through what happened in the second half of that one. You lost a couple of spots and ultimately ended up third.
Smith: Yeah, I didn’t really know where I was at. The mechanics' area was in a really tough spot tonight. I didn’t see the pit board one lap today. It’s out of a corner off 90 degrees to our left. So I had no idea really where I was at. I just didn’t feel very comfortable tonight. I got a lot better starts than I’ve been getting this year and then didn’t ride as good as I did in the first two races. So that was pretty frustrating. Then RJ (Hampshire) caught me and I didn’t even really hear him behind me whenever he came up the inside and hit his rear wheel and went down. It’s just frustrating to ride like that whenever you’re getting that good of starts. It’s always good to be up on the podium, but these are the two guys that are leading the points and you don’t want them in front of me. It was tough out there. The track was really tough.

Austin, talk about the advanced math you were doing out there during the final lane.
Forkner: I knew that Zach had two points on me, so I had to have somebody finish between me and him. I knew Jordon was one point behind me so I had to beat him. I saw Zach down on the first lap. I was like right behind him. I almost got tangled up in that pileup, too. I just tried to start working my way up thorough. I knew Jordon was somewhere up front. I didn’t know where. I was just trying to pick my way up and try to get up to him. I got up to him and then he went down with RJ and then I actually thought that I had it. Then Zach ended up getting (Jimmy) Decotis or (Kyle) Peters or one of the Suzuki guys, was back there between us. Then he ended up getting them. My mechanic, the only lap that I saw the pit board, he said, “Go now.” So I had to the last two laps, basically, just put it down to try to catch Hampshire and that was my only chance was to try to get him, and I made it happen in that long rhythm on the last lap. I was able to go three out of the turn and then table to table. That was the fast line through that rhythm, I think, but it was definitely hard to get that. So my last three laps were probably my best laps of the moto just because I had to go for it.

We saw mistakes made in both classes. Can you talk about how the track deteriorated between all three mains and how that affected how you rode?
Osborne: It was rutty all day. It was kind of to be expected. I thought it would stay a little bit harder during the night show. It was maybe a little bit harder, but it’s just a proper race track. I feel like it was better than in the past. Before I felt like it got to a base and that was it. It was super slick. Tonight, even in our third main it was still pretty good, pretty tacky and you could find some traction. All in all, I think it’s definitely the best track that we’ve had to race on, as far as busy-wise and a lot of things that could separate guys on every lap. Moving forward, I hope that they’re busy like this each weekend. It’s way more fun for us. I think it’s better for everyone.

Smith: The track was really soft compared to years past that I’ve raced this race. In the whoops, the jump line, on the second or third lap it got a huge rut in it and it was just changing every lap. You definitely had to be on top of finding the new good line and the new ruts in the corners.

Forkner: I actually rode West Coast last year, so I have never really ridden a rutted supercross track. You can’t replicate tracks like this to practice on, so this is actually like the first race that I’ve had a rutted track and I actually liked it. You could attack some of the turns harder when it was rutted than you could… I actually got more comfortable after that first race when it was kind of perfect and not really lines. I didn’t feel that great. I didn’t feel like I could push that hard. After the lines got built in, I felt like I could lean into them and just go faster. I liked it, but the whoops were definitely chewed up bad.