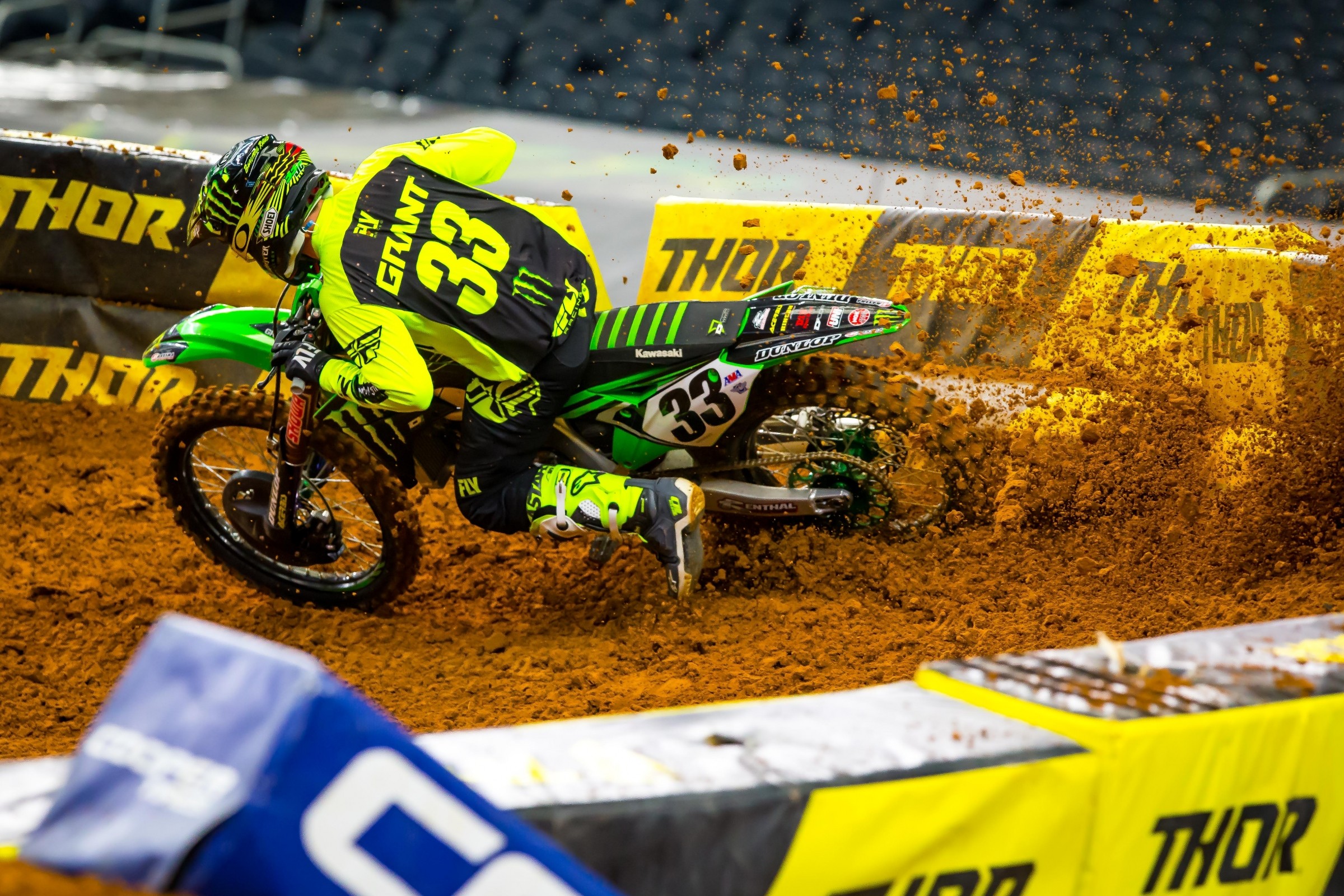 Comment: Barcia was landed on by Tyler Bowers after Barcia doubled a triple in Arlington, resulting in a broken hand for Barcia. He underwent surgery earlier this week and there is no projected return date, although on Instagram he said he’d be “back at it in no time.”

Comment: Bisceglia broke some ribs in Glendale and missed Oakland, San Diego, and Arlington. He’ll be back for Tampa.

Comment: Bogle sustained a broken humerus and small fracture in his L2 vertebrae when he was landed on in San Diego. He underwent surgery, but at this point there is no return date set.

Comment: Enticknap broke his pelvis in three places while practicing and is out for the foreseeable future.

Comment: Grant fractured his right leg during practice in Arlington. He’s scheduled to undergo surgery on Friday. At the moment, no return date has been set.

Comment: Hansen broke his foot at the Monster Energy Cup and missed the opening six rounds. He did attempt to qualify last weekend. At this time no word on if he’s racing this weekend.

Comment: Noren tore a ligament in his hand, which caused some bones to rotate. He’s also dealing with some older ligament issues in his knee, which require surgery. Recovery time is roughly six months, and Noren is expected to miss the rest of the year.

Comment: Ray crashed hard in practice during the week, dislocating his wrist and rupturing his patella tendon. A return date has not been set, but he’s likely out for the rest of the supercross season.

OK so this is a tough pill to swallow because my season was going super well and getting better each week , As some of you may have heard I had a pretty bad practice crash this week that was sort of out of my hands and wasn’t really anything I can do about it.Just a little bit of bad luck but I suffered a dislocated wrist and a ruptured patella tendon in my knee. Doing everything in my power to get back on the bike as soon as possible and I just want to thank my team friends and family for all the support they’ve given me I hope to be back better and stronger than ever❤️?

Comment: Roczen shattered his hand, dislocated metacarpals, and tore ligaments in his hand when his hand got sucked into Cooper Webb’s rear wheel in San Diego. He underwent surgery but likely won’t be back racing soon. In the meantime, if you want to see what the inside of his hand looks like, go here.

Comment: Ames and Chaz Braden had a scary moment last week in Arlington when Ames got pushed wide and into an oncoming lane occupied by Braden. The two collided, resulting in a broken femur for Ames, which will put him on the sidelines for 12 weeks.

Comment: Braden sustained a “bum knee” in a crash, mentioned above, with Ames. On Instagram he wrote, “Well I made it through the night alive, took a straight head on hit in my heat race 4th gear pinned with another rider that had got pushed of the track. the bikes totaled but I’m going to make it out with a bum knee and that’s about it ready for the next one.”

MARTIN DAVALOS — BANGED UP | IN

Comment: Davalos was one of the victims collected in a nasty first-turn crash last week in Arlington. When contacted earlier this week, his team told us everything was set for him to race in Tampa.

Comment: Hoeft broke both his feet in San Diego. He underwent surgery and will use the 250SX West Region break to try to heal up.

Comment: Martin sprained his wrist in San Diego and was unable to race the main. He hopes to be back for the next 250SX West Region race.

Comment: McAdoo sustained a small fracture in his hand early in the race last weekend, but was able to finish 13th. He is going to try to race this weekend.

Comment: Mosiman missed Arlington after sustaining a concussion in a practice crash. He hopes to return to for Atlanta or Daytona.

Comment: Pennington has five separated ribs from a practice crash in Arlington but will attempt to race this weekend in Tampa.

Comment: Root was working on going through the Ricky Carmichael Road to Supercross in arenacross and was attempting to gut his way through what were thought to be minor injuries. On closer inspection, it was learned he’d been racing with two broken collarbones and a fractured sternum. Recovery time is two to three months, although he plans on resting up and attempting to race through the pain to get his points.

Comment: Wharton was scheduled to race last week but had to postpone his comeback after getting hurt in a practice crash. There’s a chance he’ll race this weekend, but our attempts to reach him for confirmation were unsuccessful.