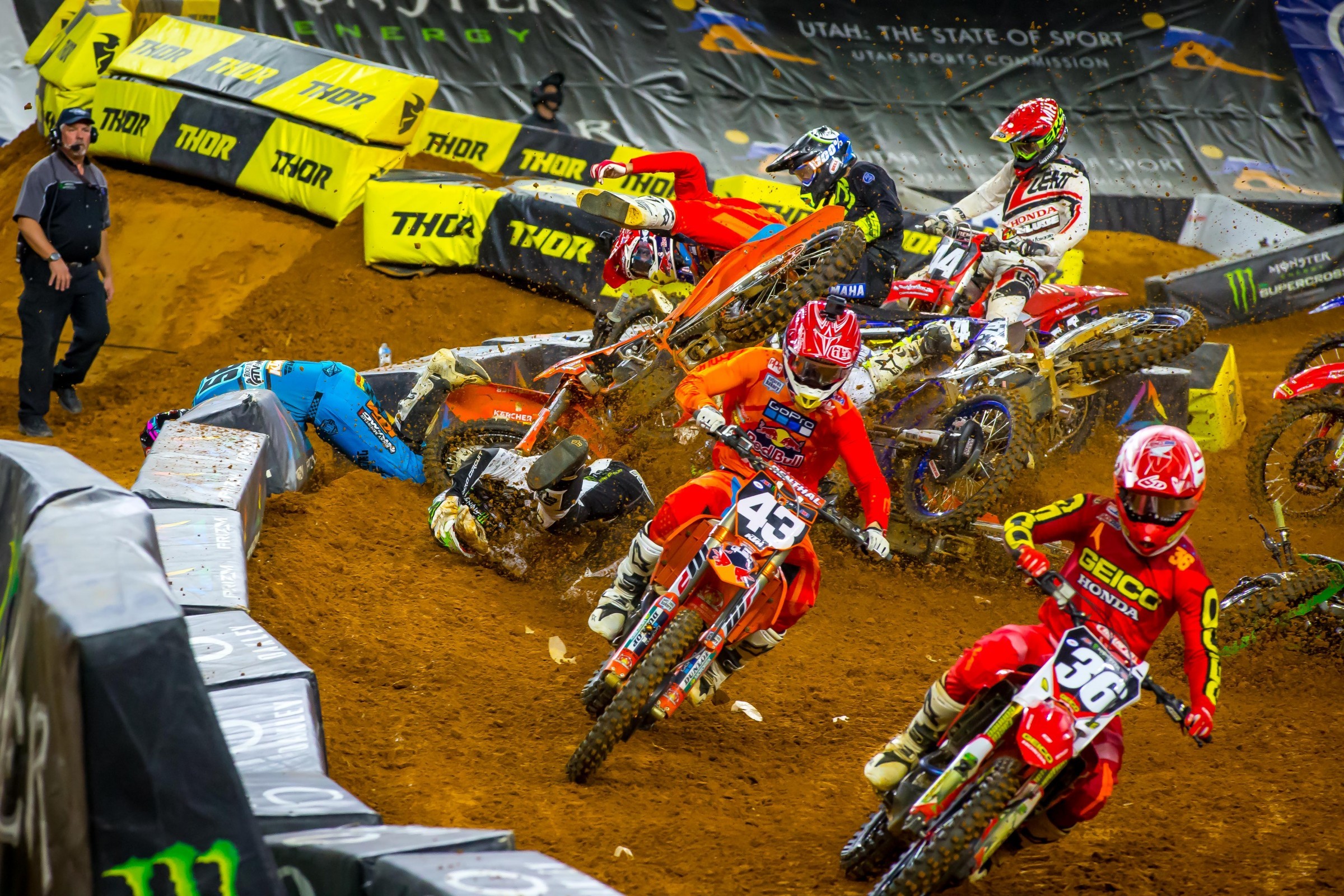 It happened on the very first lap of the very first heat race. RJ Hampshire block-passed Austin Forkner, and Forkner immediately set himself on a mission: get him back.

“I just got smashed in the second turn and cut, and it hurt my hand a little bit by the grip,” Forkner said to Fox Sports. “I was hungry, I wanted it back. I didn’t want him to have it like that.”

Then Forkner got some more of it in the main event, when Zach Osborne tagged him on lap one, and Forkner went down.

Racing incident? Forkner, of course, only saw this one way.

“I just get blindsided by Osborne, in the turn before the start straight,” he said.

Zach has told us he did not see it that way. Do you think he gets the benefit of the doubt in the Monster Energy/Pro Circuit Kawasaki rig? Watch at the 35-second mark:

Anyway, by then, we had already seen that insane first turn crash, which basically started because Josh Osby needed to get on the brakes earlier for the first turn but did not, leading him to tag Martin Davalos and send everyone flying. Since the race started with such craziness, it needed to end with that, too. Jordon Smith and Jeremy Martin were both down in that first turn and chased each other through the pack. Smith spent the entire race inching up on Martin, closing steadily for 15 minutes. He got somewhat close on the last lap, but it would have been really hard to pull off a pass… but he went for it anyway!

Smith drilled Martin and sent them both to the ground in a classic “pick up pass.” Whichever rider got up first was going to get the position. Martin ended up doing that. He was not happy, but he kept his comments to, “Looking forward to Tampa and hopefully everybody calms down a little.”

As for Smith, hey, he explained himself on Instagram. “Got up and had to put my head down to try to get every single point I could. I know it’s a long season and every point counts, so that’s what I was trying to do!”

Remember, Smith came into last year’s final round tied for the points lead. He really, really knows that every point counts.

This is what makes the 250 class the 250 class. From Forkner trying to get revenge immediately in the heat to Smith throwing it all out there on the last lap, or any and all chaos between, the 250 class does not live for tomorrow. That makes it crazy every night.