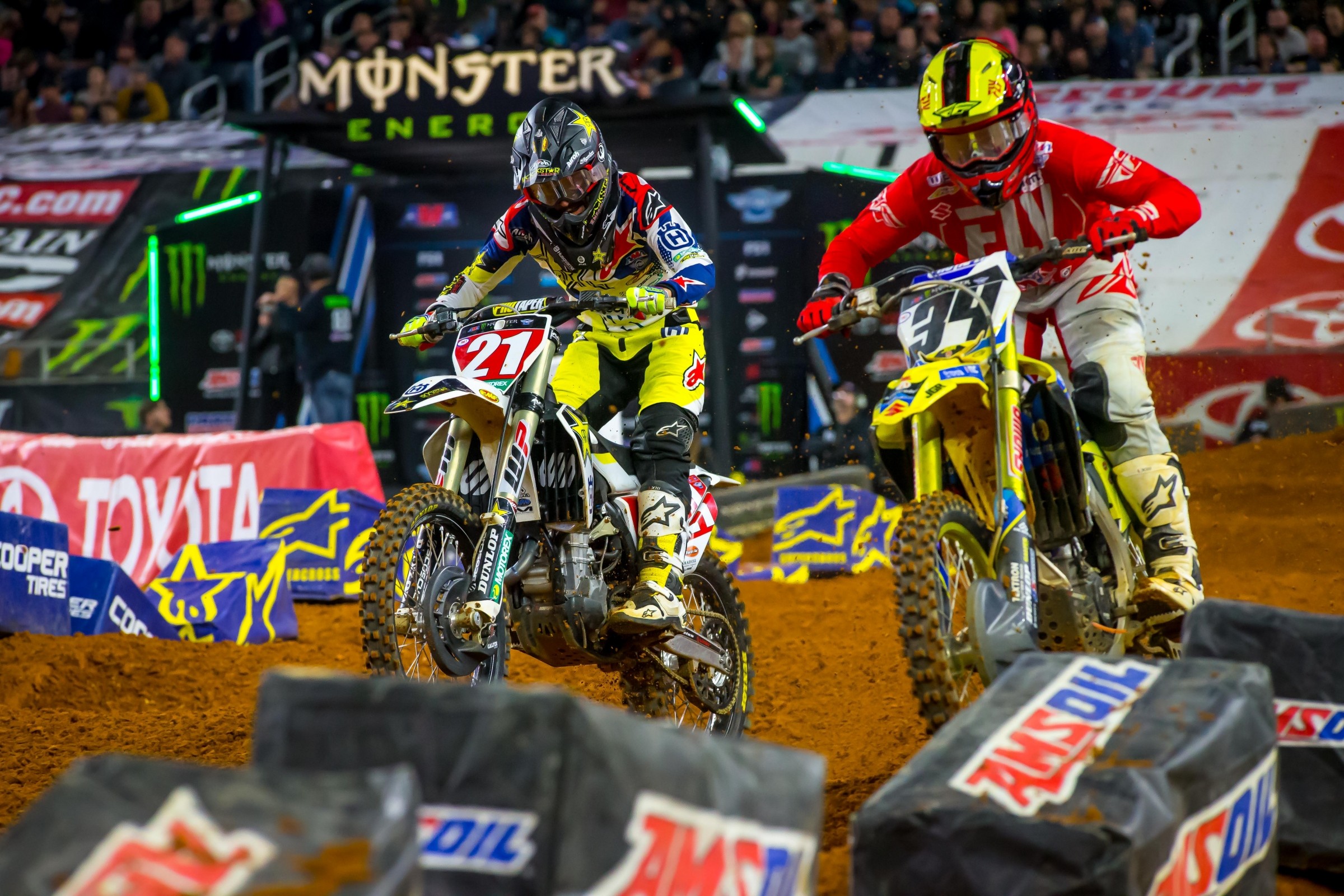 The emotional highs and lows of Monster Energy Supercross were on display again at round seven in Arlington, Texas. On the first lap of the first 450SX heat race, yet another title contender exited the series when Justin Barcia grabbed the holeshot, failed to negotiate a triple and got clipped by Tyler Bowers resulting in a broken bone in Barcia’s hand. By the end of the night, Eli Tomac was the dominant winner, the Monster Energy Kawasaki rider grabbing this third triumph of the year. This just served as a reminder of how crazy this series has been—Tomac has three wins in seven races and yet sits more than sixty points out of the championship.

“We just try to not change anything. It’s dirt bikes and crazy things happen,” said Tomac. “It totally sucks [when you have the bad races]. Just because you know you put in three months or whatever it is of hard work getting ready for the season. You’ve got your hopes high and suddenly you’re 70 points out of the lead. It’s a place you never want to be in but unfortunately here we are. At least we’re back up here winning races.”

Tomac was dominant. He was so fast in the final practice that his best three laps were faster than any other rider’s best. He holeshot and dominated his heat. He dominated the main event. He made it look as easy as it looked difficult at other races this year.

With Barcia now out (and Ken Roczen also down for a while with a broken hand also) this title is completely in Jason Anderson’s hands if he can avoid a major error. He made a small one tonight, tipping over while running in second early behind Tomac. He picked it up to finish fourth, the kind of savage job needed to lock down the title.

“I made it happen this weekend,” said Anderson in a team statement. “I qualified third and was second in my heat. I was second in the main then tipped over and made it back to fourth. I was able to make up some points and now I just need to keep the ball rolling."

Second went to Marvin Musquin, who also has had the ups and downs like Tomac (he won the season opener only to crash out of round two). “For sure feels a lot better than a few weeks ago. Just like Eli said, you get ready and you put in the work. I was the best [winning] at round one and then you go down at round two. Those injuries, it’s hard to keep going every week and every day. Cardio, gym training and racing, it’s hard, but I’m definitely doing better every week. It’s certainly not where I want to be.”

Blake Baggett said he had a big crash during the week and was happy to just get up on the podium again. “I guess if these two wouldn’t show up it would help,” said Baggett with a laugh about getting a victory.

Anderson was able to bulldog his way back through after his  tip over to get fourth, passing Cole Seely and Weston Peick to do it. Cooper Webb got passed by Seely early when he bobbled, then spent the entire race trying to get him back. He was also able to get Peick but fell short of getting Seely at the end.

Besides Barcia’s hand injury, Josh Grant’s day was a heartbreaker, too, as the veteran Monster Energy Kawasaki rider cased a jump badly in practice and hurt his leg. The leg was suspected to be broken and Grant was already on a flight back to California to get more tests done.

The 250 class was nutty right from the start. Martin Davalos totally had it dialed in all day and night, topping each practice session and winning his heat. He nailed the start in the main and appeared to have the holeshot until he got hit from the inside and went flying—literally. It was ugly, and Martin was able to get back up but did not rejoin the race. The crash also claimed contenders like Jordon Smith and Dylan Ferrandis. Up front, RJ Hampshire led laps for the first time in his supercross career but admitted he just wasn’t comfortable and wasn’t riding well. He built a small lead over Sean Cantrell but not much, and when Zach Osborne came barreling through he passed Hampshire for the lead. Overall, Hampshire was bummed to have missed the podium after starting so well.

Osborne was not dominant like he was expected to be. He said he actually felt “too calm” and needed to get fired up, and the first-turn crash for others made it even worse because he wanted to take it easy and just survive for a few laps. He finally kicked it up a gear and went after Cantrell and Hampshire and was able to get the lead and the win on what wasn’t his best night.

“Today I just felt, I don’t know, mid-range,” said Osborne. “I was just trying to circulate and string it together. The last like six weeks have been a long time, and two weeks ago I was at my breaking point with riding by myself and doing motos. I kind of got a talking to from Aldon Baker. I guess I just came with the expectation that I was just going to be the fastest in every session but I was never able to do that last year. I have to be prepared for that grind.”

Hampshire then crashed back to fourth, and Colt Nichols scored second. Nichols’ arm injury was so bad he said he waited until Sunday to book his flight because he wasn’t sure he would race. He ended up on the podium. Jimmy Decotis joined him by finishing third, the first trip to the box in his career. “In the old format I probably would have gotten fourth tonight because RJ was still up there,” said Decotis. “Coming from a guy who used to fade I would have never thought I would like a longer race, but I’ll take it tonight.”

Davalos’ night was done after the first-turn crash. Dylan Ferrandis got up but finished 19th. Jordon Smith went down by raged all the way back to catch Jeremy Martin in a battle for fifth, but he plowed into Martin and then they both went down. Martin got up more quickly and got away.