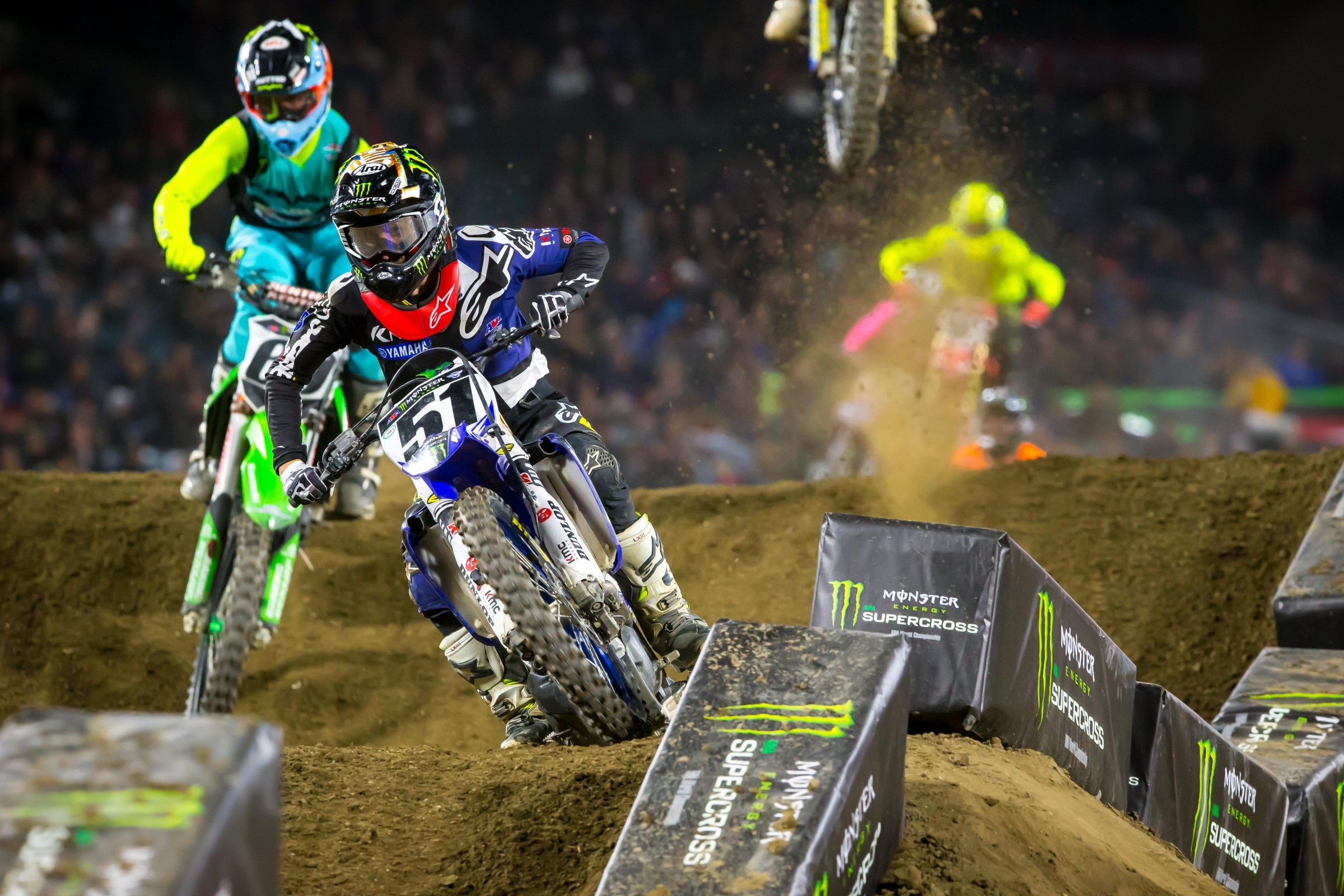 Two weeks ago in Oakland, Justin Barcia logged the fastest qualifying time and won his heat race. It appeared that if he could just nail the start in the main, he could score a breakthrough victory, especially after a close second the weekend before in Glendale. At that time, Eli Tomac was running a two-race win streak, too. But in Oakland, Barcia got a bad start and he and Tomac came together, Tomac finished 13th and Barcia fifth. Since then, Anderson has won two in a row, Tomac had another DNF, and Ken Roczen got hurt. Anderson is looking at a 28-point lead now. If anyone wants to keep him in sight, they have to respond now. —Jason Weigandt

With Eli Tomac’s title chances pretty much extinguished, it’s been suggested on message boards and social media that the Monster Energy Kawasaki rider just might start phoning it in the rest of the season as he prepares to defend his 450 Lucas Oil Pro Motocross Championship. Let us tell you right now, that is not going to happen. Tomac is a passionate athlete, and his desire to win, whether or not there’s a title on the line, burns more intensely than a phosphorous grenade. Gigantic win bonuses aren’t a bad motivator either. Expect Tomac to be back in full form and going for the win in Arlington. —Aaron Hansel

Three in a row?

Blake Baggett is on a roll. After taking third in Oakland, he snagged yet another podium, a third, in San Diego. As great as these finishes are in the moment for Baggett and the whole Rocky Mountain ATV/MC-KTM-WPS team, they also pay future dividends in the form of confidence. And as we said in this very column last week, Baggett’s a dangerous man with some confidence in his pocket. Don’t be surprised if he takes his third podium in a row in Arlington. —Hansel

San Diego was by far the best race of the season for Broc Tickle, who finished fifth. Before San Diego, Tickle had gone eighth, eighth, 16th, 11th, and eighth, so this top-five is a nice step forward. Can he do it again, or even improve on it in Arlington? We’ll have to wait to find out, but if he does, San Diego just might mark the point where Tickle turned around what was starting to look like a lackluster season. —Hansel

Right now Jason Anderson is gone in the points, and Justin Barcia has a pretty good grip on second. But behind them, it’s tighter than a privateer’s fuel budget—just ten points separate third place through eighth! Fifth through eighth are even closer. Baggett and Justin Brayton are tied for fifth with 99 points, Weston Peick’s got 98, and Marvin Musquin has 96. And especially with Ken Roczen out, it’s quite likely we’ll see some form of reshuffling in the point standings this weekend. —Hansel

Industry, fans, and media alike have pegged defending East Region Champion Zach Osborne as the overwhelming favorite to repeat this year. Coming off a four-win title campaign last year—not to mention a dominating title run in Lucas Oil Pro Motocross—there isn’t much evidence to sway popular opinion that Osborne won’t do it again. To steal a popular sports adage, “That’s why they play the game.” Eli Tomac was in a similar position entering 450SX, and we saw how that played out. A simple mistake, by another rider or yourself, can quickly destroy a season—especially in a nine-race series. Remember, as good as Zach was last year, it took a last-race, last-lap pass to dig out the championship. Let’s see how Osborne begins his title defense this weekend. —Chase Stallo

Is there anyone more under the radar than Troy Lee Designs/Red Bull KTM’s Jordon Smith entering the East Region opener? Have we already forgotten that Smith was thisclose to WINNING THE TITLE LAST YEAR? Yeah, he crashed out and came up short, but he was in the hunt all year. Speed has never been in question with Smith; his problems have revolved more around consistency—which he made people forget about with six podiums in nine rounds in 2017. Let’s see if Smith can remind people why he was in the title chase a year ago. —Stallo

Which rookie will have the best finish this weekend?

We’ve been saying this for quite a few years, but THIS could be Martin Davalos’ last chance at capturing that elusive 250 title he’s been chasing since making his pro debut in 2006. Davalos is back for a second go-around with Monster Energy/Pro Circuit Kawasaki, the same team he coulda, shoulda, woulda won the title with in 2014 if not for injury. Davalos had a good West Region campaign in 2017 but couldn’t close the deal on a win. Can he begin 2018 with one? —Stallo

The same argument plays out every year—the West is WAY more stacked than the East. I’m not here to argue one way or the other, but check out our East Region preview and you’ll see the East has plenty of depth. Osborne is the favorite for sure, but Jeremy Martin, Austin Forkner, RJ Hampshire, Dylan Ferrandis, Jordon Smith, Martin Davalos, and many more won’t just give him the title. Can one of the riders above pull off the upset this weekend? —Stallo