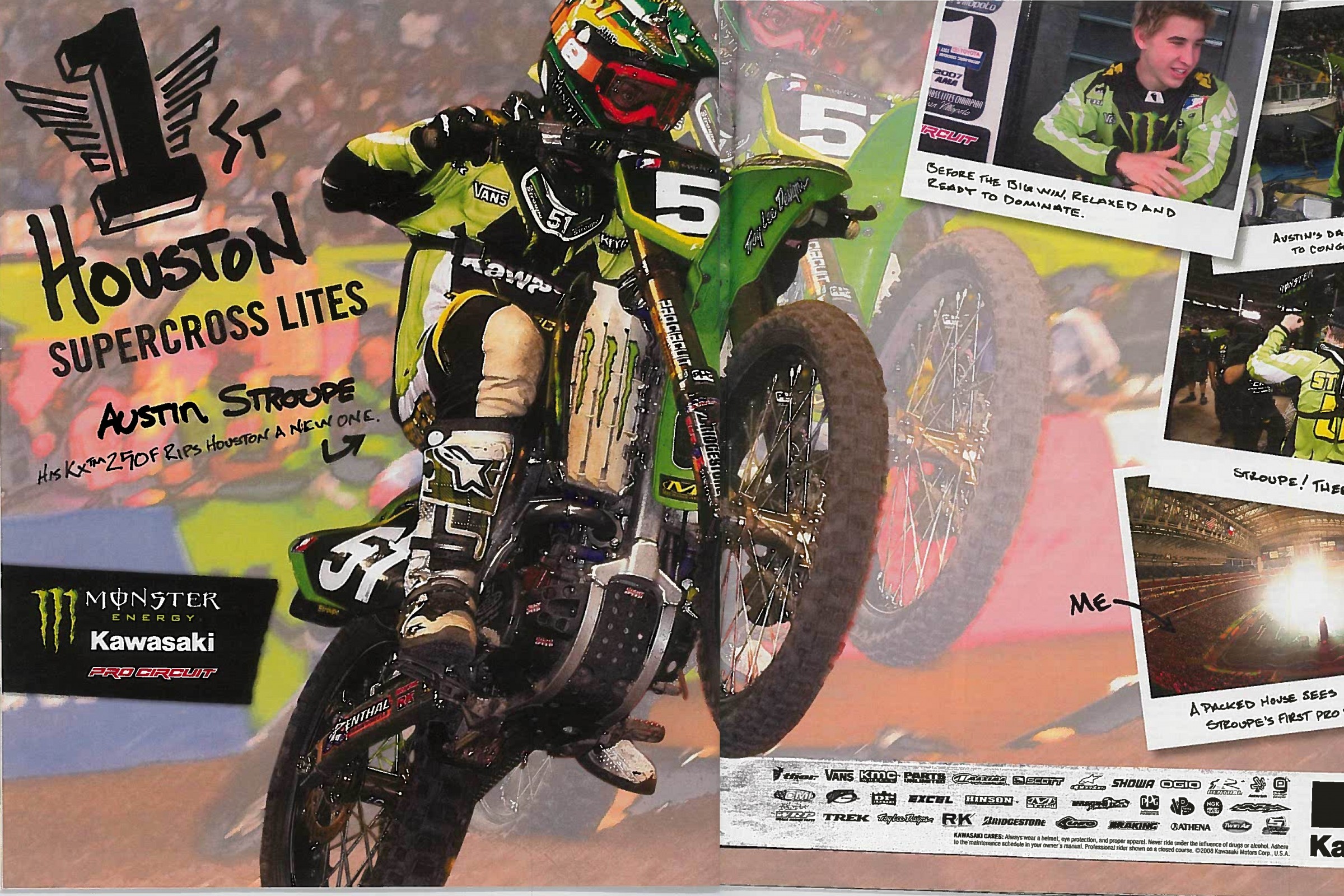 On This Day in Moto February 16

Monster Energy Kawasaki’s Ryan Villopoto got his third win of the season at Arlington’s AT&T Stadium, home of the Dallas Cowboys. RV topped Rockstar Suzuki rider Davi Millsaps, the series points leader, and Red Bull KTM’s Ryan Dungey. Qualifying for the main event but then not actually racing in the final was James Stewart, as the clutch failed on him on the starting gate and he had to scratch.

This race is often remembered for the wild crash that rookie Zach Bell suffered on a big triple, which you can see right here:

At the Glen Helen WORCS race at Glen Helen Raceway, Red Bull KTM's Ryan Hughes captured the win aboard a KTM 250 SX as he prepared for a run at the AMA 125cc National Motocross Championship later that summer. Russ Pearson was second, followed by Ty Davis, Lance Smail, and Nathan Woods.

Team Honda’s Ricky Carmichael, still trying to dig out of the huge hole he started his first AMA Supercross title defense in, started picking up steam at the Minneapolis SX at the old Metrodome. RC was at the beginning of a six-race tear that would see him overtake early points leader David Vuillemin of Team Yamaha. Ricky’s new Honda teammate Ernesto Fonseca does his best by getting in between Carmichael and Vuillemin in the final results, marking Lobito’s second-ever premier-class podium.

Factory Connection Honda rider Mike LaRocco was also in the hunt, but in the main event, at the end of the whoops, Travis Pastrana went in too fast and came down on LaRocco’s arm, snapping his wrist.

The 125 Class sees an all-foreign rider podium (maybe for the first time ever?) as Australia’s Chad Reed tops South Africa’s Grant Langston and Frenchman Steve Boniface. Add in the fact that Fonseca is from Costa Rica and Vuillemin from France and you have only one American on the podium between the two classes!

The Seattle Kingdome doubleheader ends with Rick Johnson winning the 250 Class and Donny Schmit in the 125 Class. Johnson was followed in the Rainer Beer main event by four fellow AMA Motorcycle Hall of Famers: Jeff Ward, Johnny O’Mara, David Bailey, and Broc Glover. Schmit was a future Hall of Famer too, and would top Texan Carroll Richardson and California’s Tyson Vohland.

Team Suzuki's Randy Hawkins opened his attempt to get back on top of the AMA National Enduro Championship Series with a win at the Quicksilver National in Coalinga, California. Hawkins, who lost his title to KTM's Jeff Russell the previous year, topped Russell by three points. Husqvarna's Kevin Hines was third.

Bob Hannah landed on the cover of the February 16, 1977 issue of Cycle News.