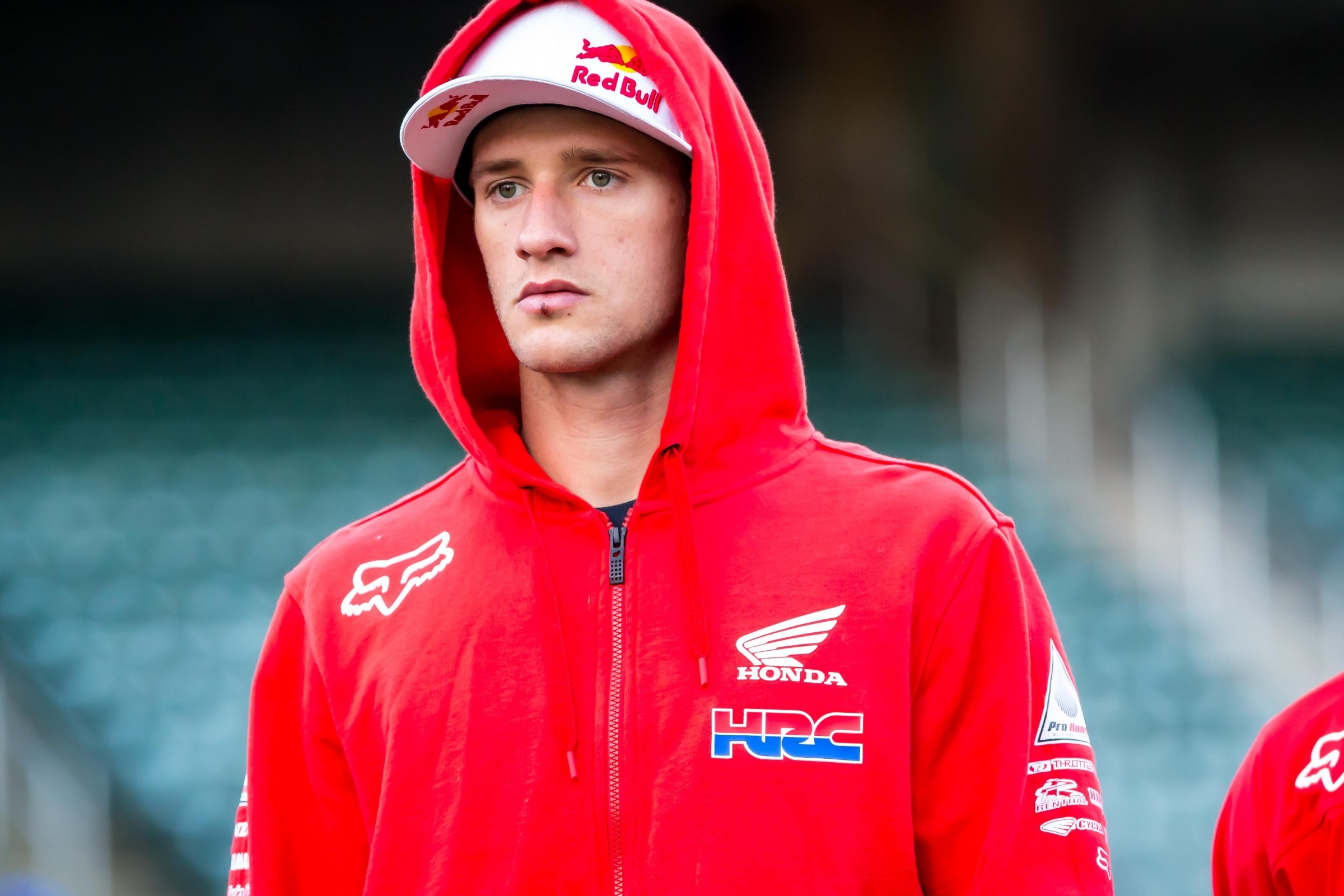 Comment: Bogle sustained a broken humerus and small fracture in his L2 vertebrae when he was landed on in San Diego. He’s since had surgery and is working toward getting back in racing form. The team is unsure when he’ll be able to return to competition.

Comment: A huge crash in Oakland left Tyler Bowers with a broken pinky, some broken ribs, sprained wrist, badly bruised shoulder, and a bruised lung. Somehow he was able to gut it out in San Diego, and is planning on doing the same in Arlington.

Comment: Bisceglia broke some ribs in Glendale and missed Oakland and San Diego. He’d hoped to be back for Arlington but it didn’t work out. He’ll miss this weekend.

Comment: Enticknap is out for the foreseeable future after breaking his pelvis in three places while practicing.

Comment: Hansen broke his foot at the Monster Energy Cup and has yet to race Monster Energy AMA Supercross this year. In Oakland we were told he’d likely race San Diego, and one week later his bike was even sporting #72, his actual AMA number, instead of the #100 it’s been wearing all season. Hansen ended up not racing in San Diego, but he shouldn’t be out much longer.

Comment: Noren tore a ligament in his hand, which caused some bones to rotate. He’s also dealing with some older ligament issues in his knee, which require surgery. Recovery time is roughly six months, and Noren is expected to miss the rest of the year.

Comment: Ray had a big crash in San Diego when he came up short while attempting to triple into the sand section. He incurred a huge gash on his shin in the crash but is planning on attempting to race in Arlington.

Comment: An evaluation at the Alpinestars Mobile Medical Unit following Roczen’s crash in San Diego, in which his arm was sucked into Cooper Webb’s rear wheel and swingarm, suggested a fracture to the second metacarpal in his right hand. Roczen will undergo surgery tomorrow (Friday) and will get to work on his recovery. An exact return date has yet to be set.

DAKOTA TEDDER — BANGED UP | IN

Comment: Tedder went down after getting hit by another rider in San Diego. His team told us he’s “banged up, burned, bruised, swollen and pissed off.” A decision on whether or not he’ll race in Arlington is yet to be made.

Comment: Weimer, who’d only recently returned to racing after sustaining serious injuries in a preseason crash, broke his wrist and two metacarpals on top of his hand in San Diego. He’s out for the near future.

Comment: Cooper will likely be back in action in Seattle after breaking nine ribs, hurting his shoulder, and sustaining a concussion in Houston.

Comment: After breaking his collarbone and wrist in November, Forkner is once again ready to race. He’s in for Arlington.

Comment: Hoeft broke both his feet in what was a truly nasty looking crash in San Diego. He's scheduled for surgery on Tuesday and is out for the foreseeable future.

Comment: Martin crashed in his heat race San Diego, but still managed to qualify. He lined up for the main but the pain in his wrist was so great he could barely hang on during the parade lap and pulled out just before the gate dropped. X-rays would later determine no bones were broken and that Martin had sustained a severe sprain. Martin says he’ll be back for the next 250SX West Region race.

Comment: Mosiman announced on Friday that he will miss Arlington due to a concussion sustained in a recent practice crash. He hopes to return for Atlanta or Daytona.

Comment: Nichols is in for Arlington after breaking his upper arm mid-December.

Comment: Pennington is ready to race after breaking his scaphoid in December.

Comment: Root was working on going through the Ricky Carmichael Road to Supercross in Arenacross and was attempting to gut his way through what were thought to be minor injuries. On closer inspection, it was learned he’d been racing with two broken collarbones and a fractured sternum. Recovery time is two to three months, although he plans on resting up and attempting to race through the pain to get his points.

Comment: Wharton’s return to racing won’t be happening this weekend. “My intention just two weeks ago was to be on the line at the season opener for the East series February 17 in Arlington, but we’ve been pushed back a round or two because I had practice crash that’s put me behind a bit,” he said. He hopes to return in the next round or two.