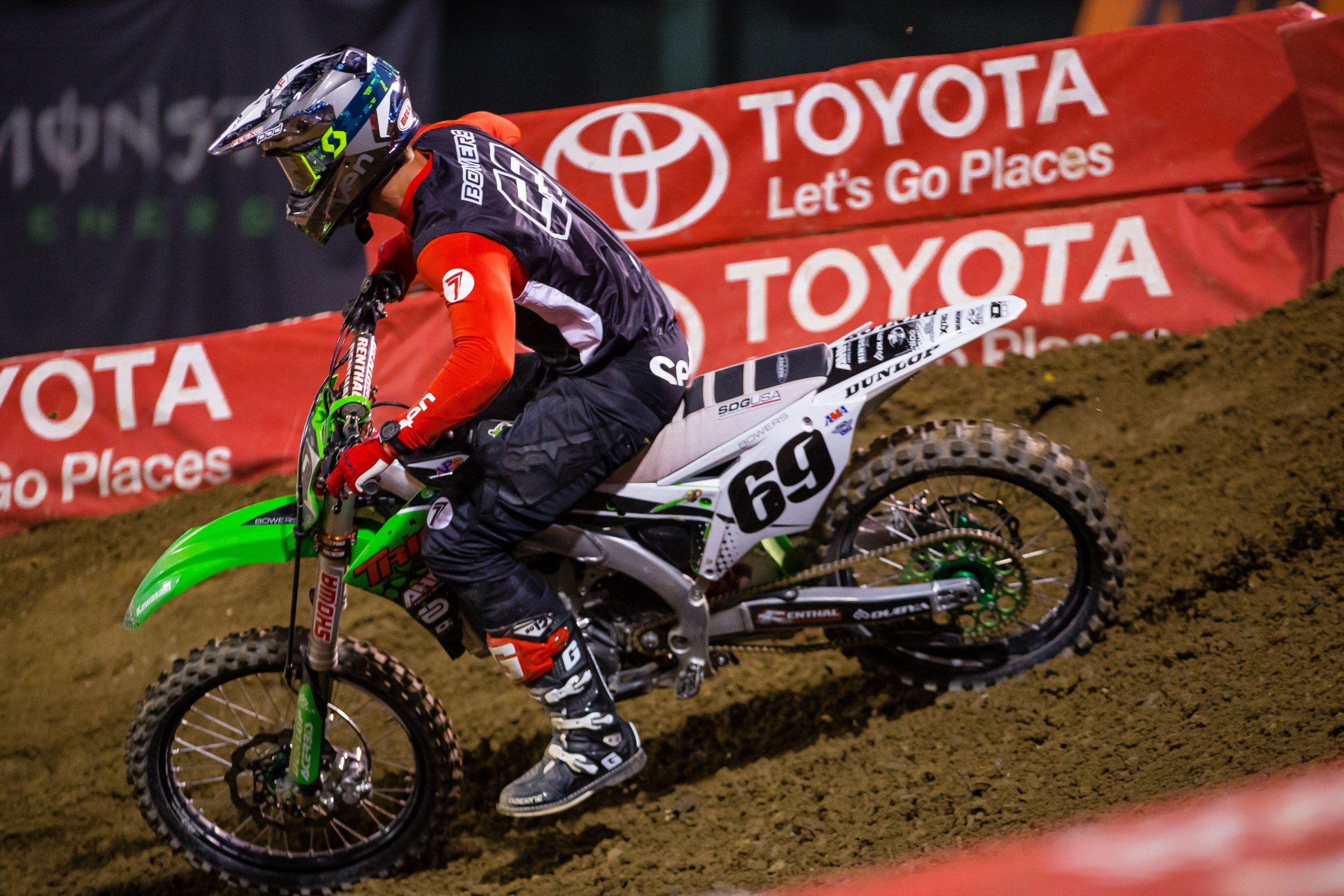 Comment: Tyler Bowers had a ridiculously huge crash in Oakland, which left him with a broken pinky, some broken ribs, sprained wrist, badly bruised shoulder, and a bruised lung. He's going to attempt practice in San Diego before making a final decision.

HOW AM I DOING⁉️ Went to doctor yesterday and lucky for me I only have a broken pinky and some ribs. However, I have some severe deep bruising and sprains that hurt the worst. I will try to ride on Thursday to see whether or not I’ll race this weekend. Thanks for all the texts, calls, DMS, memes. God was definitely watching over me! #toughblocksandtoesdontmix

Comment: Bisceglia broke some ribs in Glendale and missed Oakland. He’ll also miss San Diego, but plans on getting back to racing in Arlington.

Comment: Enticknap will miss a substantial amount of racing after breaking his pelvis in three places while practicing.

Comment: Hansen broke his foot at the Monster Energy Cup and has yet to race Monster Energy AMA Supercross this year. We stopped by his pits in Oakland and were told he’d likely be racing in San Diego, although we still haven’t been able to get an official word on his status.

Part 1 After 14 years as a professional Supercross and Motocross racer, today, I announce my retirement from racing. Obviously, this was not an easy decision for me to make. Before the crash that I sustained back in October, I felt great while on the bike, and I was looking forward to an awesome 2018 season with my team, Monster Energy/Knich/Yamaha Factory Racing. Everything was falling perfectly into place: my training, my fitness, and the bike. I had high expectations for the 2018 Supercross season. Then, the unexpected happened and life changed so fast. I was sent to the ICU with a major concussion, bleeding in and around my brain, and a shattered elbow, along with being bruised and banged up pretty much all over. After months of recovery and consulting with my neurologist and family, we came to the difficult decision that it was time for me to retire from racing. I say this with great sadness, and this is definitely not how I wanted to end my career. But health is a priority. When the doctor told me that he couldn't release me due to the risk that another impact on my head could be life-altering, not to mention life-threatening, it was pretty tough news for me to swallow. The reality of retirement was very hard to face. It brings out a bag of so many mixed emotions. It saddens me greatly to have to go out like this. I have given so much of my life to this sport. I basically grew up on a track chasing my dream.

Comment: Cooper will likely be back in action when the 250SX Region resumes in Seattle after breaking nine ribs, hurting his shoulder, and sustaining a concussion in Houston.

Comment: Forkner broke his collarbone in November, but should be ready for the 250SX East Region season opener.

Comment: Nichols will be ready for the 250SX East Region after breaking his upper arm mid-December.

Comment: Oldenburg has been dealing with muscle pain in his upper arm after going down in practice in Glendale. He had another crash in Oakland that left him feeling pretty banged up, and he ended up needing seven stitches in his arm. Whether or not he races this weekend is expected to be a game day decision.

He posted on Instagram, "Oakland was one of the toughest days of my life! Still feeling pretty banged up from my crash last weekend.. toughed it out the best I could through practice. Ended up crashing in the first turn of the heat race and got a foot peg to the elbow... gave it my best yesterday but unfortunately just wasn’t in the cards..." Click here to view the post, but be warned—we hear it's pretty gross.