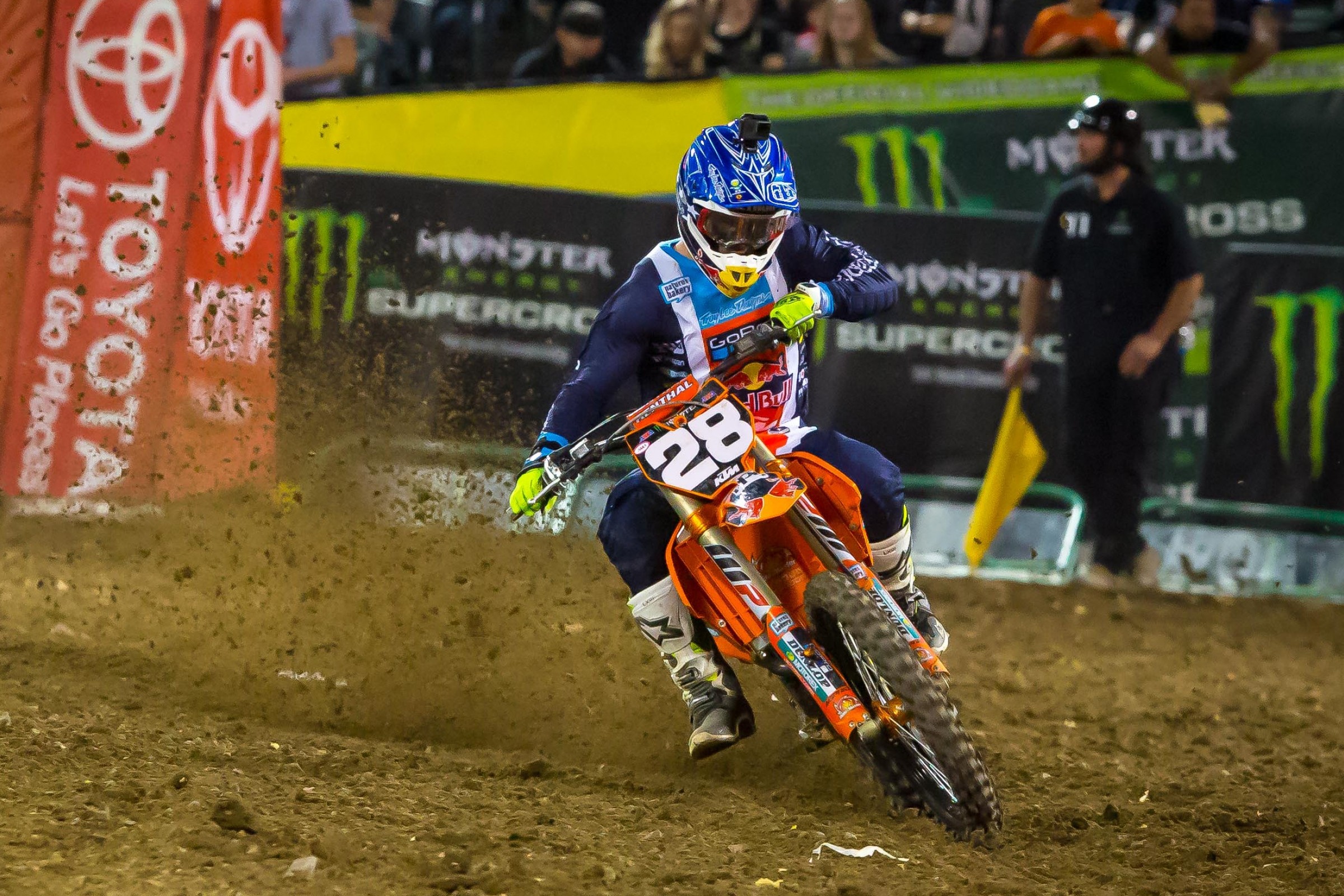 On paper, Oakland looked like a disaster for Shane McElrath, as the TLD/Red Bull KTM rider got hung up early, then crashed hard and had to stop in the mechanics' area. His 15th-place finish puts him now 19 points back of series’ leader Aaron Plessinger. Shane was surprisingly positive after the night, though, because he’s struggled on rutted tracks before and was happy with his riding aside from a big moment on the ground. It’s pretty hard to get this guy bummed out!

We talked to Shane after the race.

Racer X: Take us through your night.
Shane McElrath: Really, I had a good jump. I just got squeezed out by the Kawasaki guys. I got hung up in the first corner. A hay bale stuck in my shifter. It was one of those things where you’ve just kind of got to calm down and ride. I felt really good on the bike, which is what I’m pumped about. Fifteenth place for the championship is not good. I ended up going down. Just cross-rutted and landed on a hay bale. Landed in the berm and just really, really shook me up. I hurt my chest, hurt my ribs. I’m not real sure how everything is, but even afterwards, I felt good on the bike. Just one of those nights where you get as much as you can and you move on. We’re okay. I’m definitely sore, but we’re still here and we’re still going to go for it.

You got a little tangled up, it looked like, in that bowl corner. Who was that with?
That was actually my fault. I cross-rutted and landed on the hay bale. When I did, it just kind of ejected me straight over the bars. Then I just landed straight into the berm and pretty much into that guy. That’s why he fell. It was totally my fault. That was a big hit. That was really what cost me. Just the ruts were pretty gnarly.

Can you talk about the track a little bit? It looked like it was pretty tough out there.
Yeah, it was tough, but I really felt good on the bike all day. This is not really something I’ve ever been comfortable on. I struggled really bad here last year, even though I ended up third. This year, like, all day today I just felt good on the bike, felt solid. Sometimes I may not be the fastest, but I just felt solid and felt steady. I really felt good going into the main. It all started with my start, which just is all my fault. A little bummed on it, but at the same time I’m happy that I’m healthy and I was able to finish the race and I feel good on the bike. There’s nothing that can take that away.

You pulled into the mechanics’ area for a minute there. What were you working on there?
I hit my head. I didn’t really knock the breath out of me, but I couldn't really breathe. That was why I was rolling around. My chest felt like it was knotted up. My mechanic ran to me. He’s like, “What’s wrong?” My bars were twisted, but I couldn’t really breathe. That was the only thing. I just had to kind of do a total body check. I was like, okay, I’m okay, and then I can keep going. I think that’s one of those things that it was kind of scary. Even as soon as I got up, I was like, dude, I’m up. Whoa. I was like, wow. I couldn’t believe I got up. So, then it was just like, all right, checking everything, making sure I was okay. Then I just got back going. Like I said, I felt really good on the bike. It was a big hit but I’m just happy to be okay.