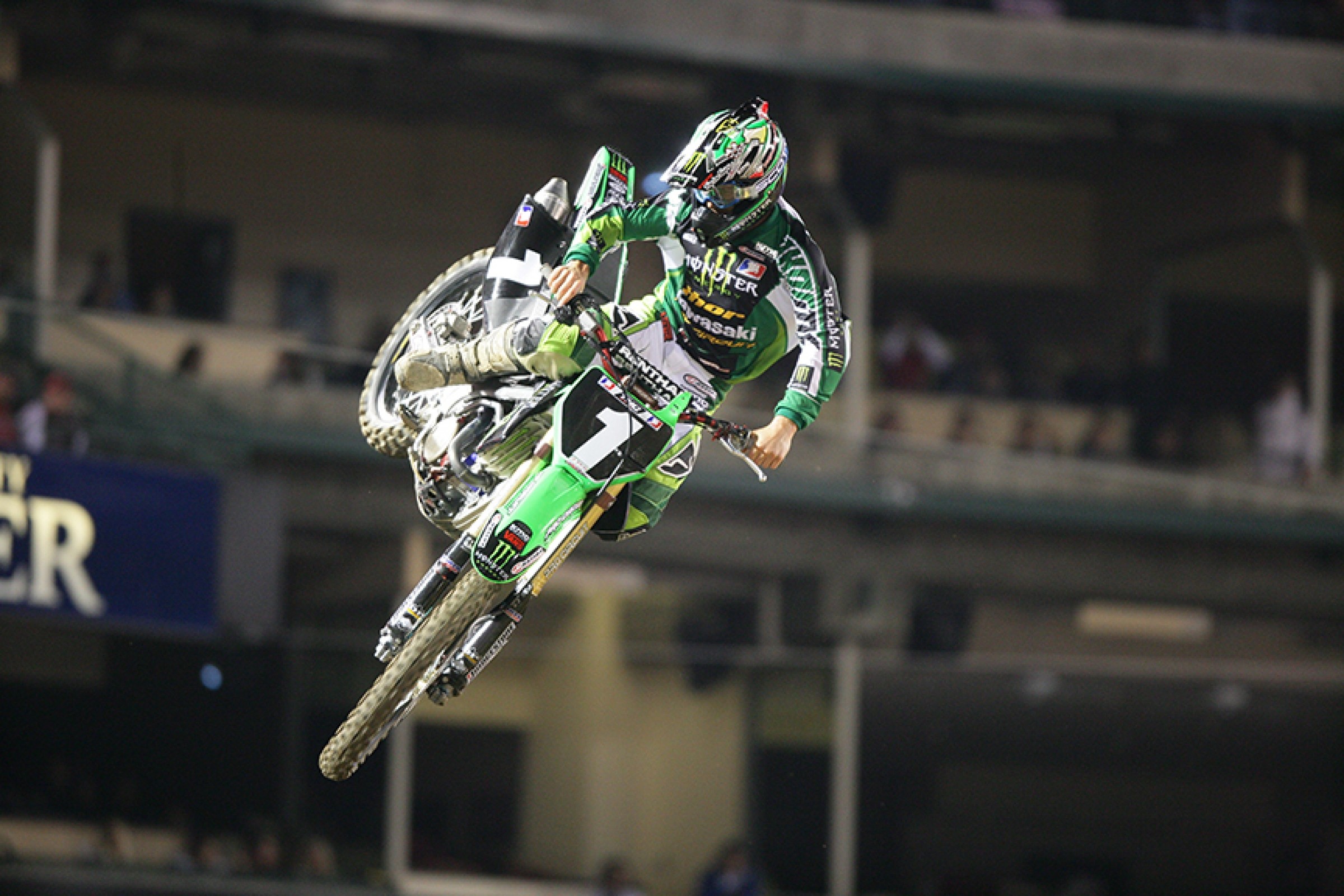 On This Day in Moto February 5

Rick Johnson won the second day of the Seattle doubleheader at the old Kingdome, which gave him three straight wins to start the 1989 AMA/Camel Supercross Championship. Suzuki's Johnny O'Mara and Honda's Guy Cooper finished in second and third place.

And in the 125 class, Jeff "Chicken" Matiasevich also got the weekend sweep, bettering a kid from California riding in only his third professional race, Honda CR125-mounted Jeremy McGrath. The second-place finish marked McGrath's first-ever podium.

Team Honda's Jeremy McGrath kept rolling on in AMA Supercross, winning his fourth straight 250cc main event to start the season. McGrath would not quite have the season in '94 that he would in '96, when he won the first 13 rounds on the trot, but he had already begun gapping the rest of the field and would win more races than every other rider combined between 1993 and '96.

On that same night in San Diego, Pro Circuit Kawasaki's Ryan Hughes, one week after failing to qualify at Anaheim after his father suffered a heart attack and passed away, came back to take an emotional win in the 125cc main event. It was Ryno's first win as a professional.

“This is for you, Dad,” Hughes said as he held up his trophy to the sky on the podium. He would later tell Cycle News, “Everything has been going so bad lately, I thought to myself on the starting line, ‘Just go for it, what do you have to lose?’ Once I built up my lead, I thought I had it. I just kept thinking about my dad and he was watching and taking care of me on the track.”

We couldn’t find footage from the ’94 San Diego SX other than this big first-turn crash in the 125cc main event including Mike Metzger, Damon Huffman, and our own David Pingree.

Also in San Diego, local hero Ron Lechien decided to come out of supercross retirement for one night and ended up qualifying for the 250cc main event, finishing 13th while doing whips and heel-clickers for the fans throughout the race. He was riding Kawasaki KX250 with help from FMF, and though he was just 27 years old, Dogger had not raced an AMA Supercross event since 1989.

Jimmy Gaddis, the defending AMA 125cc West Region Champion, was the winner of the AMA National/Pro-Lite Arenacross Series in Lincoln, Nebraska, in both classes. Billy Whitley was second in both classes.

Monster Energy/Pro Circuit Kawasaki's Ivan Tedesco earned his class-record fifth Anaheim SX win by taking the 125 Class at A3 for 2005. Later on, Cooper Webb would earn four, as would Jake Weimer, but no one had yet to earn a fifth win in the 125/250 class in any stadium besides Ivan Tedesco at Angel Stadium at Anaheim.

The Professor of Motocross himself, Gary Bailey, appeared on the cover of the February 5 Cycle News East, offering motocross riding lessons aboard a Bultaco Pursang.

And here’s a random collection of crash videos from the early nineties: