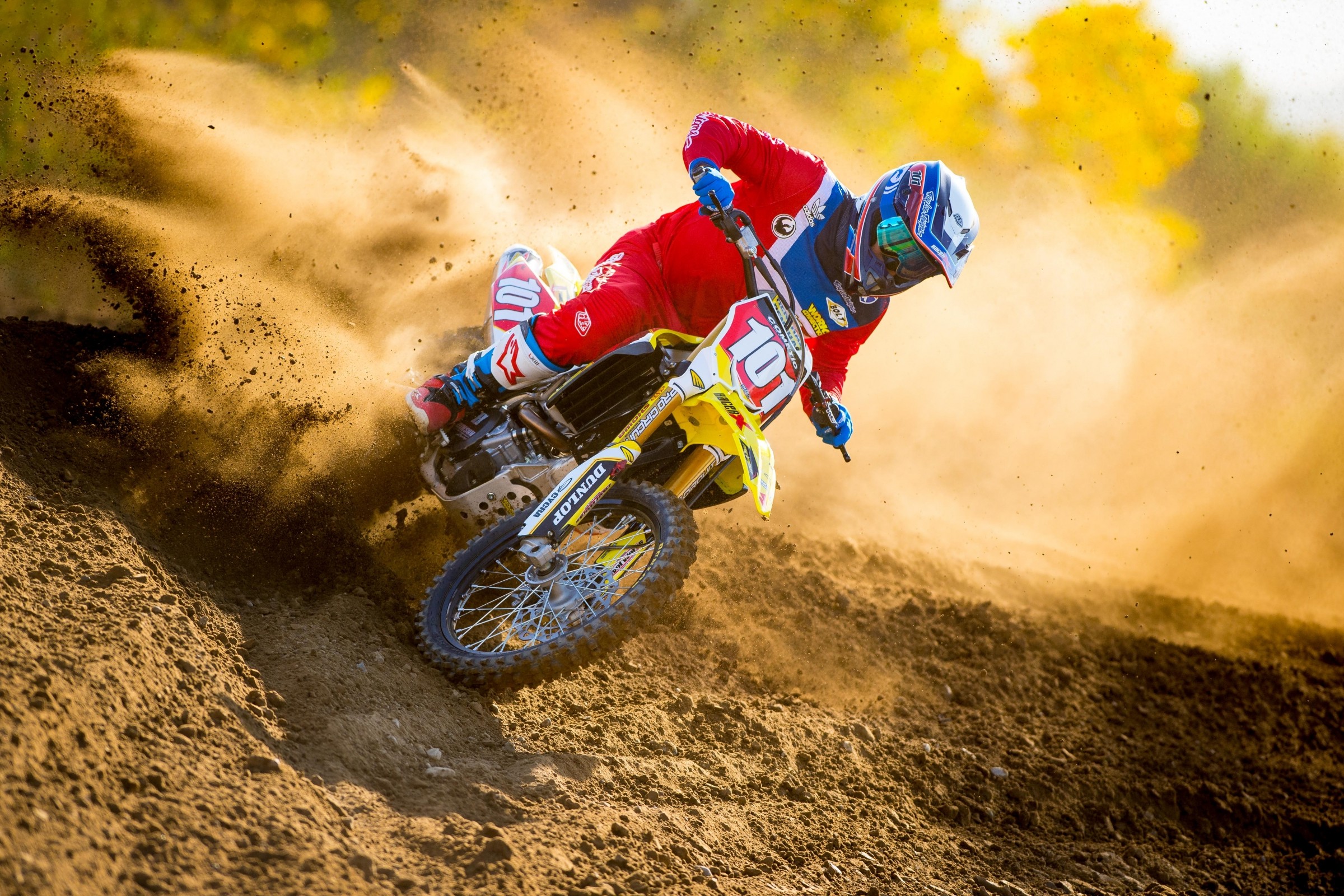 Can you please explain, what seems to be shooting yourself in the foot with your number marketing? For example, Stewart with #7 and Hanny with #100. Eventually someone else is going to have to take over their AMA numbers and remove attention from these riders’ brands that they are marketing for sponsorships that let them ride. For goodness sake, even the #101 will one day be taken over someday. I don’t think it's smart, but then again, what's the end game plan for these riders? Sell the brand while you’re racing and make as much as you can, or be like Troy Lee or Mitch who can sell whatever they want and confidently put their name behind it for years to come?

You do sound confused because you’re talking about three different situations entirely. Hanny is still racing and he’s built a team around his number with “LVN 100.” I haven’t raced professionally in years and I chose a number outside the top 100 so that I could keep it as long as I was riding dirt bikes without disrespecting those who have put in the work to earn a national number. Your rationale doesn’t really work with either of us because Hanny is still racing and I don’t race anymore. Stewart, on the other hand, built a brand around a number he was using while he was racing. I can’t sit here and disagree with you… the whole thing doesn’t make a lot of sense now that he’s done racing and completely out of the sport. It doesn’t seem like he is involved with the company at all, so maybe he doesn’t care what happens to it. I’m not sure because James doesn’t come out of his cave in Florida very often these days. I’m sure he’s hoping he can sell it at some point and make a little cheddar in the process. I just don’t know how much value that company has without him involved.

FELD/Fox sports can't be serious with this TV package, can they? It's unbearable to watch. The Triple Crown last weekend had 70 minutes or so of actual racing for a 3-hour show. C'mon, I know advertising pays the bills, but the 20-30 min of B.S. between races was just horrible. Even last year and in years previous, the commercials and all the fill were built for DVR flipping, but this year, these first three races have been very hard to watch for the stay-at-home East Coast (Pennsylvania) guy like myself. It's late, there's no action on the track, etc. I guess I'll just go the DVR route from here going forward, but my real question is, why not a two- or two and a half-hour time slot? Seems simple. Less time for sponsors, I get all that, but isn't the racing supposed to take center stage, not the sponsors?

I agree that the show needs to be tightened up a bit for the new Triple Crown format. The time between races was filled with ads (can’t get away from that) and filler pieces that were mostly uninteresting. Your solution is to cut the show down to two hours? That is absolutely ridiculous because the folks going to the stadium to watch would just get to their seats, grab a hot dog and a beer, and the main event would be winding down and ushers would be sending people home. That is a terrible idea, Adam, and you need to sit down before you hurt yourself. A better idea is to improve the entertainment between races both in the stadium and on the broadcast. There are plenty of things that could be done with current or former riders that fans would enjoy. Weiner dogs racing down the start straight? Not so much.

After my first long trip to SoCal over Christmas through A1 (Dana Point as the home base), I've never been more impressed with a part of the country that is more geographically diverse with predominately awesome weather and scenic views and has so many different dirt bike and mountain bike options. I read so many negative things about Cali, but really, I was overall very impressed for the three weeks. Seems like the Mecca of two wheels except for the cost of housing, LOL. I made sure to visit some of the well-known MX parks and really enjoyed watching the various non-major factory riders getting ready for A1 on public courses while at the same time watching so many normal riders like myself just out there having run riding on the non-SX tracks. It was amazing for this East Coast guy to see for the first time.

It's tempting to think how much fun it could be to move there permanently. It'd be hard to figure how to fit all the fun in each month. Did you end up making the move to SoCal permanent and, if not, why, since it seems like a natural fit? Do you personally ever get out on motorcycles anymore to just ride off-road trails and/or ever get to the East Coast and ride a mix of single track woods and rocks "just for fun?" I get the impression you don't ride dirt bikes much except for MX tracks as part of the job and leave the other type of fun off-road riding for mountain bikes. However, if you still do mess around with your own dirt bikes, I'm curious if you've tried Gen 2 Tubeless or Nitro Mousse systems and your thoughts on them versus just using a regular UHD inner tube.

California does seem great at first. The weather is probably better than any other location in the country, and the geographical variation is unlike any other locale as well. From my house in Temecula I can be at the beach in an hour, the mountains in 90 minutes, three different lakes within 30 minutes, at least six legit motocross tracks within an hour, and mountain biking trails are everywhere. Sounds like heaven for an action sports person, right? The problem is the millions of other people with the same idea… 22 million in southern California, to be exact. And 1.4 million of them are here illegally, which becomes a real problem when one of them hits you in their car with no insurance. It is the most expensive place to live, largely due to the taxes implemented to pay for the state’s expansive social programs. The housing market is also unimaginably inflated. The worst part is the culture here, which is basically every man for himself. I’ve been here since 1993, so I don’t even realize how bad it is until I go to a different state and I am shocked by how polite and courteous people are outside of California.

I don’t get to ride “just for fun” much these days. Most of my track days are spent shooting a project bike or riding a new model, though you won’t hear me complaining about that. I am committed to spending more time riding this year, so we’ll see if that goes better than my New Year’s resolution to stop eating sweets, which lasted until just after lunch on January 1 when I shoveled an entire tin of leftover Christmas cookies into my gullet like a mountain of coal into the Titanic engine compartment as it steamed into the Atlantic.

I have tried the Nitro Mousse tubes and really liked them for off-road and adventure riding. I’m still a tube fan for moto because you get more specific feedback from tubes. Thanks for the visiting the Golden State. Now get the hell out. (Oh, sorry, that’s the Californian side of me talking.)