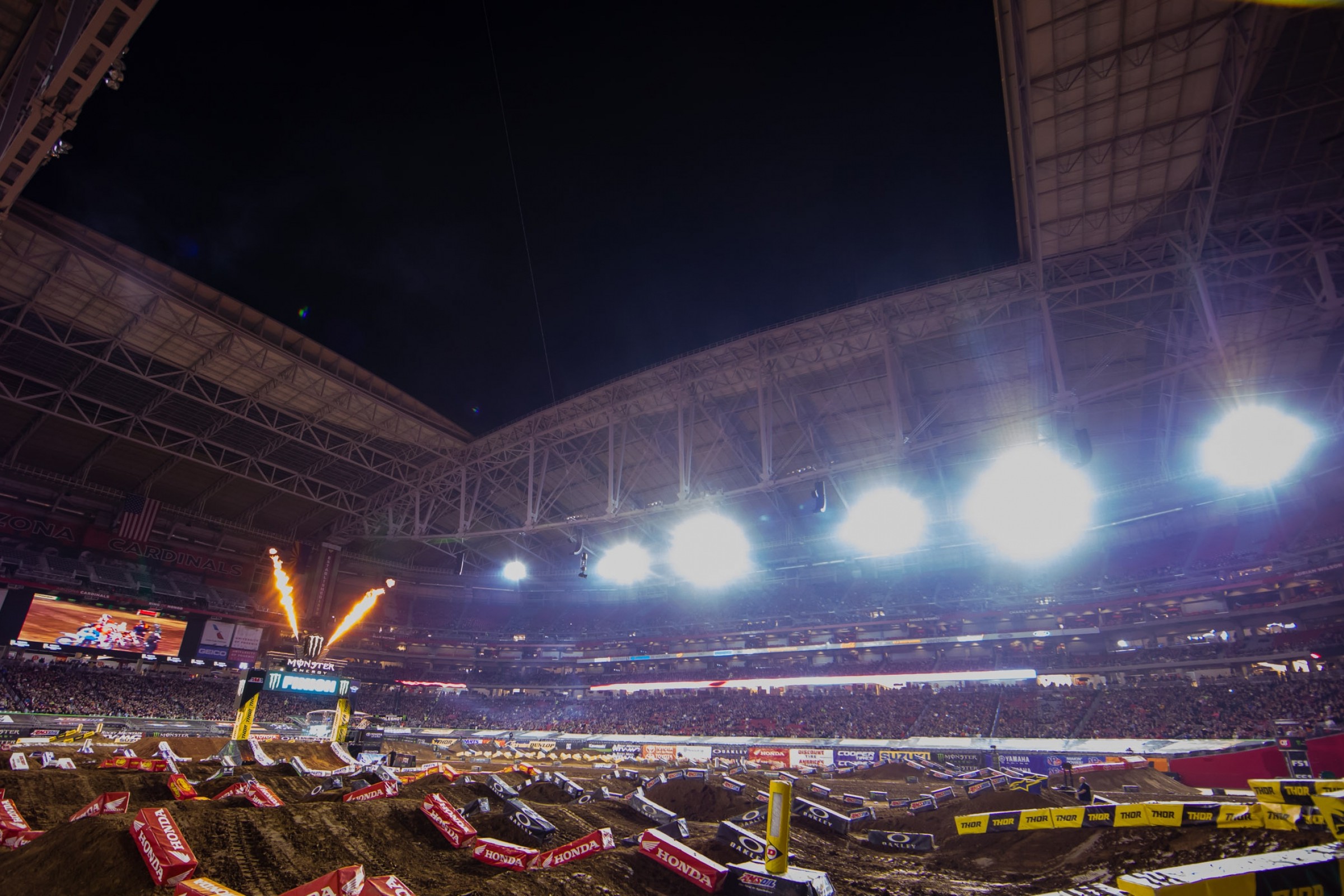 It sure looked like Eli Tomac was back on point last week at Anaheim 2 when he logged his first win—and complete race—of the season. Just one week prior in Houston, he wasn’t even able to race, so his shoulder is obviously feeling much better. Then again, the Triple Crown format and its shorter races may not be the best indicator of whether or not a rider can go hard for 20-plus-two, either. We’re back to the standard format this weekend in Glendale, which should offer a more accurate look at just how far Tomac’s shoulder has come since he drove it into the dirt at Anaheim 1. —Aaron Hansel

Justin Hill was talked about in this column last week and will be continue to be discussed until the real Hill shows up. A seventh place at the opener followed by a pair of tenths is not what anyone, including Hill himself, expects. We know the defending 250SX West Region champion is better than this and we know he’s going to show it at some point this season. We just don’t know when. Could it be in Glendale this weekend? —Hansel

Okay, so Aaron Plessinger’s results at A2 weren’t ideal. In a format that required excellent starts, Plessinger wasn’t able to get out of the gate well in any of the night’s three main events. Not surprisingly, that was reflected in his overall result: sixth place. He also lost the red plate after holding the lead by four points. Fortunately for Plessinger, he didn’t incur much damage on what could be considered an off-night. He’s only out of the lead by two points, which means a win in Glendale gets him the red plate back. —Hansel

When the 250s role out for competition this weekend, you’re going to see two red plates. Don’t worry, you’re not seeing double, so don’t put your drink down just yet. Shane McElrath and Joey Savatgy are currently tied for the lead at 68 points each, which means they’ll both be sporting red number plates. We know they won’t both have it after the race, but who will? McElrath? Savatgy? Neither? —Hansel

Talking about Weston Peick here, which shouldn’t really come as a big surprise. The Autotrader/Yoshimura Suzuki rider has been pretty rock-solid the last few years, and so far in 2018 that’s been especially true. Peick’s taken fifth at every single race so far and now sits, you guessed it, fifth in points. He’s not far behind the guys in front of him, either—he’s two back of Ken Roczen, three behind Justin Barcia, and five behind Cole Seely, who sits in second place. With the standings that tight, Peick could easily move up a few spots if he has a good race in Glendale. —Hansel

Yes, former 450SX points leader Marvin Musquin was back for round three in Anaheim last weekend. No, he was definitely not the same rider that won the opener. Musquin gutted out 9-11 finishes before pulling out early of the third main event; he did pick up what could be ten valuable championship points, though. Now the question is: how healthy is he this weekend? Can he pull a Tomac and return to the front? Or will his shoulder continue to cause him trouble? This is probably the most important thing to watch out for this weekend. —Chase Stallo

Sidelined for the first three rounds due to multiple injuries sustained in a pre-season crash, Jake Weimer will make his season debut this weekend. It will also mark Weimer’s debut for the Smartop/Bullfrog Spas/MotoConcepts Honda team. “It’s been a long time since I’ve raced. Las Vegas last May was the last time. The past three months have gone by slowly and it’s been difficult with my injuries, but the team has been very supportive,” Weimer said. Justin Brayton has proven the bike can be competitive, but we’ll find out this weekend how much of an effect the layoff has had on the veteran. —Stallo

Glendale will also mark the season debut for Justin Bogle on his new ride—Autotrader/Yoshimura Suzuki. Bogle rode for the team at the Monster Energy Cup but sustained a concussion; he also crashed in the off-season and hit his head again and missed the opening three rounds. “After taking the necessary time off to let my body heal, I feel ready to race. Training has been going well at The GOAT Farm. My intensity level is up where it should be, and I’m looking forward to seeing where I stand on Saturday night,” he said. Like Weimer, will see how much of an effect the layoff had on him Saturday. —Stallo

...With the Autotrader/Yoshimura Suzuki team, that is. Stewart’s deal was originally set to expire once Bogle made his return, but the team is keeping him on for another race, and possibly the entire season. In his two starts with the team, Malcolm has been solid, and is knocking on the door of a top-ten finish. He could certainly make it hard on the team if he’s able to run up front this weekend. —Stallo

Old Format is Back

To the joy of many (and the dismay of others), we’ll return to the old format this weekend. Nope, no three mains for people to voice their disapproval of. If you want to get mad about something, I guess another outlet will have to be found. Will the return to the regular format have a major impact on the results? Nah, probably not. —Stallo