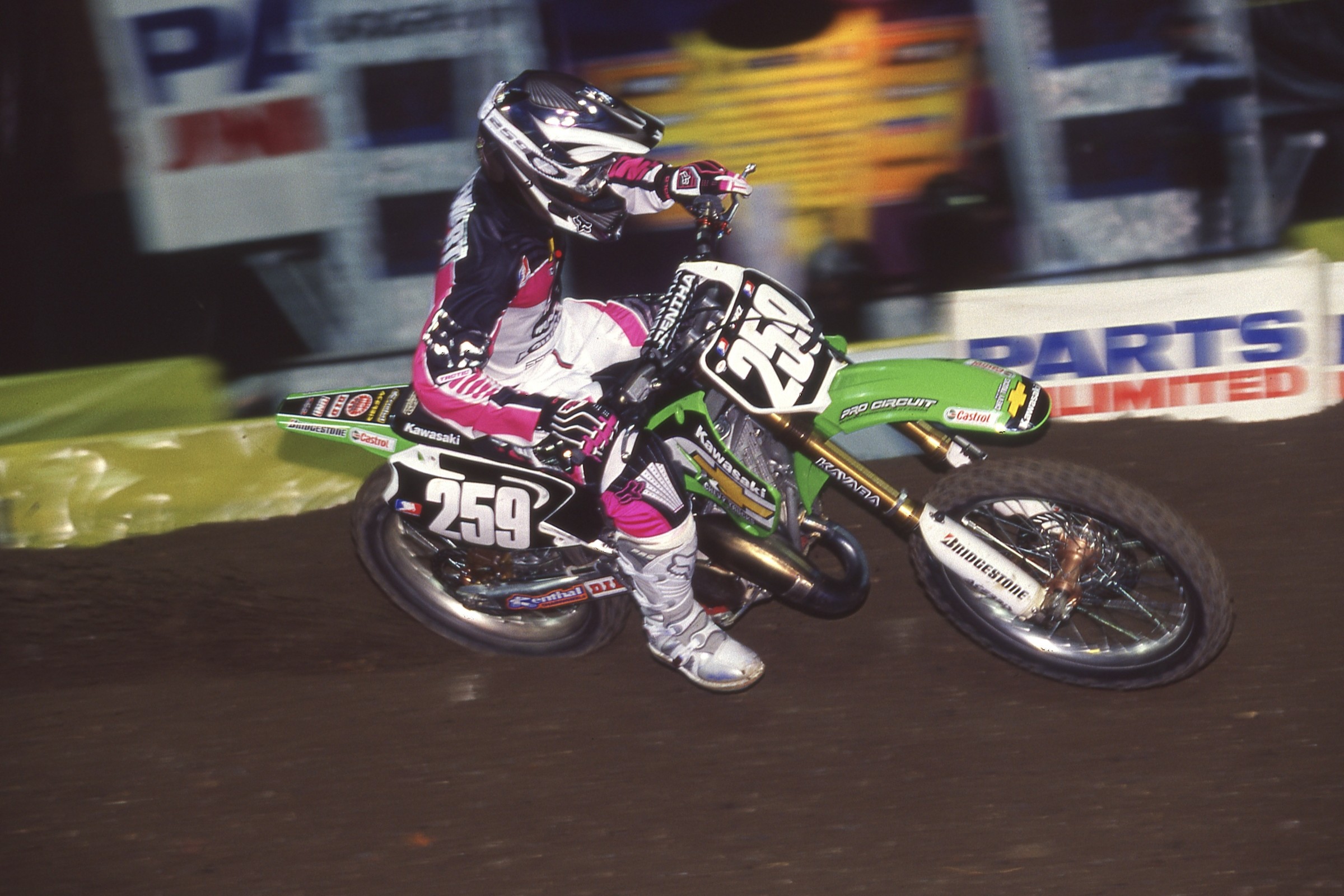 On This Day in Moto January 25

Team Yamaha's Damon Bradshaw won the third round of the AMA Camel Supercross Series in front of 63,000 fans. The 19-year-old Bradshaw outlasted defending series champion Jean-Michel Bayle and his Honda teammate Jeff Stanton. At this point in the series, Bradshaw had a 10-point lead on Stanton in what would be an epic and dramatic title fight.

"The lead isn't anything with 13 races left," Bradshaw told Cycle News' Ken Faught. "I need to win five or six in a row. This is no time to get cocky."

There were several Grand Prix racers at Anaheim that year, as they were using AMA Supercross for winter training: Stefan Everts finished ninth, Micky Dymond was eleventh, Bader Manneh 18th, and Trampas Parker crashed out and finished 20th.

It was announced that ESPN would air taped/edited footage of the AMA Camel Supercross, held on January 25, on Thursday, March 26, at 12:30 a.m. EST.

Jeff Emig got his first win of the 1997 AMA Supercross Series at Sun Devil Stadium in Tempe, Arizona, bettering his bitter rival Jeremy McGrath, who had put in his best ride of the series to that point on a Suzuki. Finishing third was Emig's Kawasaki teammate Ryan Hughes, who came from nearly dead-last off the start. Emig got the 1-900-INF-MOTO holeshot award, was passed by McGrath, then battled back past Jeremy to get the win. Emig and Hughes may have been extra-motivated by the fact that this was the last race for Kawasaki team manager Roy Turner, who was moving to the Rox Shox bicycle team. The 125 Class winner was Yamaha-mounted Kevin Windham.

Buddy Antunez wrapped up the AMA PJ1 National Arenacross Series event in Niagara Falls, New York, by sweeping Saturday night's two main events in the 125 and 250 Pro classes, giving him three of four wins on the weekend. The only one to stop in a main was former 125 West Region Supercross Champion Jimmy Gaddis.

Fox Racing riders Ricky Carmichael and James Stewart swept the San Francisco Supercross, which was practically a home race for the company, as it was based in Morgan Hill back then. Aboard his Honda CR250, Carmichael led a Yamaha freight train made up of Chad Reed, David Vuillemin, and Tim Ferry. Stewart topped fellow Kawasaki rider Matt Walker and Honda-mounted Chris Gosselaar.

The third round of the NML Winter Nationals was held in Naples, Florida, and Honda-mounted Dick Lundy was the winner of the 125 Class. Ricky Jordan won the 250 Class aboard a Bultaco—the same brand David Clemence rode on his way to the 500 Class win. In fact, the 500 Class saw a 1-2-3-4 sweep of the top spots by Bultaco riders: Clemence, Don “Killer” Kudalski, Greg Thornton, and John Savitski.

Baymare held a Trans-AMA/Inter-AMA qualifier race and some very big names showed up: Mike Hartwig on his new Yamaha Monoshocker, who topped Maico rider Jim West for the 500 Class win in the very muddy conditions. Bultaco’s Jim Pomeroy was also there, prepping for a return to Europe for the 250cc World Championships. Reigning 250cc National Champion Gary Jones was also there, racing a 125cc Can-Am in the 250 Class, in which he finished second to Ron Self. “Bad” Brad Lackey was also there and finished fifth in the 250 Class, as well as “Jammin’” Jimmy Weinert, who DNF’d on his Kawasaki.