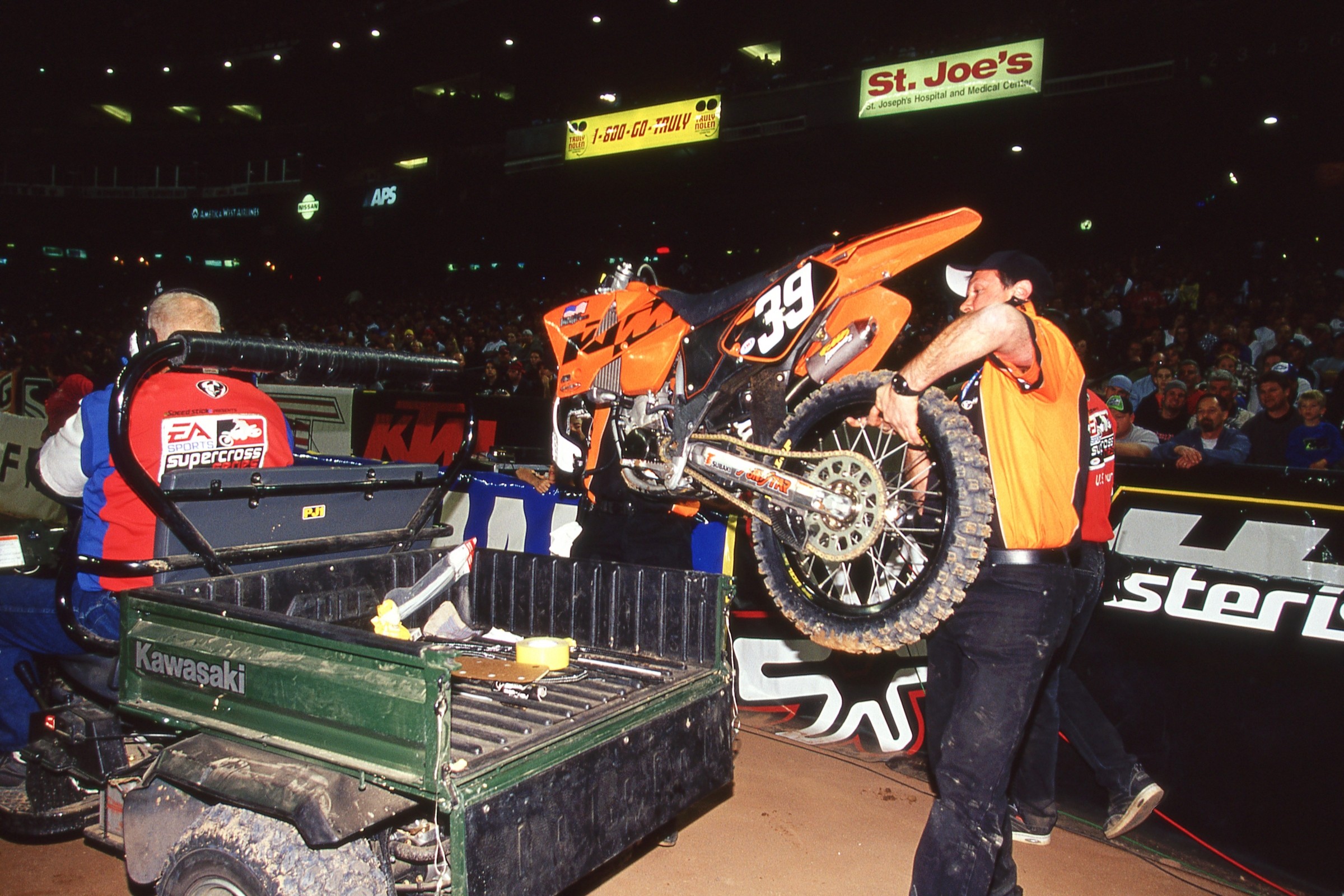 On This Day in Moto January 26

The TV movie Pray for the Wildcats, starring Andy Griffith as a bad guy for the first time in his career, aired on ABC as the Movie of the Week. In the film, Griffith is a wealthy heavy construction equipment owner as well as off-road racer who invites three of his company executives to go on a desert-riding trip. William Shatner (yes, Captain Kirk from Star Trek) and Robert Reed (the dad on The Brady Bunch), and Marjoe Gortner, a child evangelical preacher—his parents had him ordained at age 4—who decided to add acting to his resume... I'm not making this up, there is a 1972 documentary film about him called Marjoe that won the Academy Award as Best Documentary Film.

Anyway, Andy Griffith turns out to be a homicidal killer and it all ends badly for the group, and watching Andy Griffith "dirty dance" is just crazy and funny. It's really worth finding on YouTube and watching some of this campy/classic "bikesploitation" film.

Jean-Michel Bayle won the sixth AMA Camel Supercross main event of his career at the Houston Astrodome, which allowed him to take over the points lead from his Honda teammate Jeff Stanton, who crashed on the first lap and had to charge back up to seventh. Kawasaki's Jeff Matiasevich and Yamaha's Damon Bradshaw were second and third.

In 125 SX, it was a historic night as a set of brothers got on the podium at an AMA Supercross together for the first time in history. Suzuki-mounted Tallon Vohland won while his older brother Tyson finished third. In between the Vohlands was none other than Jeremy McGrath, the Peak/Pro Circuit Honda rider.

At Bank One Ballpark in Phoenix, Arizona, our own David Pingree snapped the frame on his KTM 125SX in a spectacular crash, which you can see about halfway through this attached video.

The actual races were won by Ricky Carmichael (250) and James Stewart (125). For Carmichael, it was his first win on a Honda, ending a three-race skid that started with a big crash at Anaheim 1. For Stewart it was his second career win, barely a month past his 16th birthday.

The day after the '92 Anaheim Supercross, the stadium hosted the GFI/AMA/MTEG Amateur Supercross Series. Nearly 600 amateur and youth riders got to race in the stadium on a tamed-down supercross track. Among the future pros racing in various classes were Travis Preston, Ryan Clark, David Pingree, Damon Huffman, and Jiri Dostal. There were also some current or past SX pros racing: "Rocket" Rex Staten, Mike Healey, and Bader Manneh.

Ricky Carmichael swept the 125 and 250 Pro classes at the Florida Winter-AMA Series. He topped Shae Bentley and Tony Lorusso in the 125 class; Keith Bowen and Keith Johnson won the 250 class. Carmichael had been out in California doing the first two rounds of the 125 West Region in order to prepare for his first SX campaign when the 125 East Region started.

KTM factory off-roader Scott Plessinger (Aaron's dad) won the AMA National Hare Scrambles opener in Atlanta, Texas. Plessinger and defending champion Scott Summers were neck-and-neck going into the finish, but Summers got his Honda caught up in a grapevine and went down. Steve McSwain placed third.

Defending AMA Supercross Champion Johnny O'Mara got the win at the series-opener at San Diego's Jack Murphy Stadium, even though he didn't actually win a race. That was the year of the two-mains format, similar to what we saw at Anaheim last weekend with the Triple Crown format. Team Yamaha's Broc Glover and Ricky Johnson won the motos. O'Mara went 2-2, but he also won his heat race, which was worth bonus points. Needless to say, Glover and Johnson weren't too thrilled about the new system.

Also, after a crash in his heat race and then a bad start in his qualifier, the veteran Honda rider Bob "Hurricane" Hannah failed to qualify.

Lastly, the San Diego Supercross was the first time ever for a 125 Supercross class, and the winner was Kawasaki Team Green's Todd Campbell, ahead of Tyson Vohland and Chad Parker, who would later move to Europe and go by his real first name, Trampas.