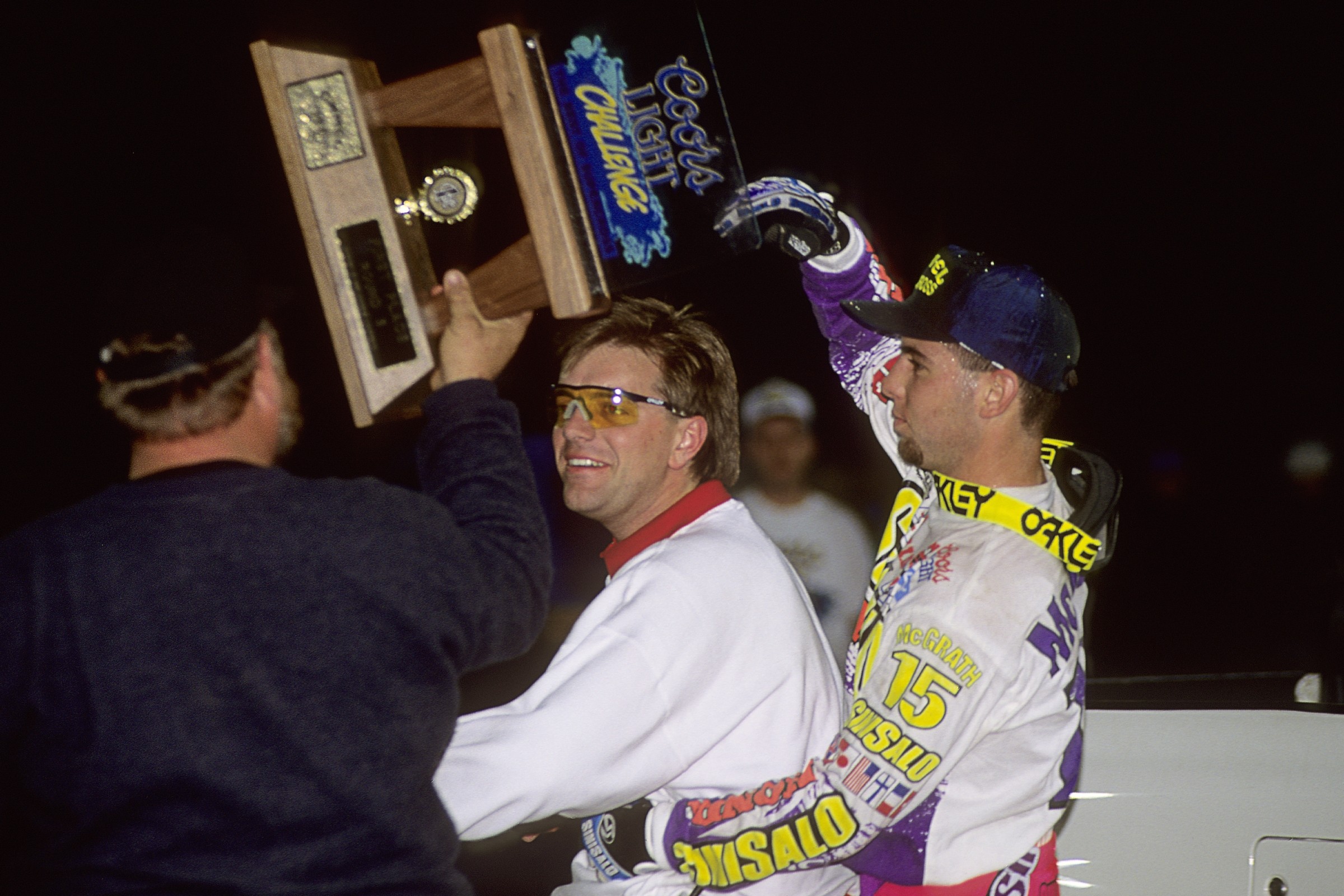 On This Day in Moto January 23

If there was ever a single game-changing main event in AMA Supercross, it was the 1993 Anaheim race. That night, at what was then called Anaheim Stadium, Team Honda's 250cc rookie Jeremy McGrath earned his first-ever win in the premier class. As a matter of fact, it was McGrath's first-ever podium, too, as he had finished fourth at the previous two rounds in Orlando and Houston. At Anaheim, the young McGrath was able to get to the front early and then pull away from his teammate Jeff Stanton, the three-time series champion, with Kawasaki riders Mike Kiedrowski and Mike LaRocco next, then the series points leader, Damon Bradshaw. From this day on, McGrath would go on a month-long tear, his first of many dominant runs in a career that would end with seven AMA Supercross Championships and 72 main event wins.

Kevin Crine was born in Maryland, near Budds Creek Raceway. Crine would grow up racing motocross, turn pro in 1992, and enjoy a decade as a successful privateer, with several top-ten finishes in AMA Supercross and Motocross and some wins on the international supercross circuit.

For a time in the nineties, he was a KTM factory rider. Crine retired in 2002. Sadly, on February 8, 2007, Crine was involved in a head-on collision in Maryland and was killed. Ever since, the Kevin Crine Memorial Award has to gone to the top-finishing privateer at the Budds Creek National.

Jeremy McGrath, working on what would be a sixth AMA Supercross Championship in seven years, wins the Phoenix SX over Team Honda's Mickael Pichon and Factory Connection Honda's Mike LaRocco. In the 125cc class, Pro Circuit Kawasaki's Nathan Ramsey got his first-ever win as a professional, topping Yamaha of Troy's Casey Johnson and Suzuki-supported Michael Brandes. Ramsey was at the beginning of a three-race win streak that would help propel him to the 125 West Region title.

Suzuki's Buddy Antunez won both the 125 and 250 main events at Round 17 of the AMA/PJ1 National Arenacross Series in Baltimore, Maryland. Among his challengers were former 125SX winners Jeromy Buehl, Denny Stephenson, and Jeff Willoh.

Makita Suzuki rider Ryan Dungey won the Anaheim 2 round of Monster Energy AMA Supercross, with Yamaha riders Josh Hill second and San Manuel Yamaha's James Stewart, the defending series champion, finishing third. Stewart, who had crashed twice the previous week in Phoenix—first with privateer Kyle Partridge during qualifying, then with Chad Reed in the main event—would quit the series the following week due to a wrist injury. Reed, riding for Monster Energy Kawasaki, was a no-show after also getting injured in the Phoenix crash with Stewart.