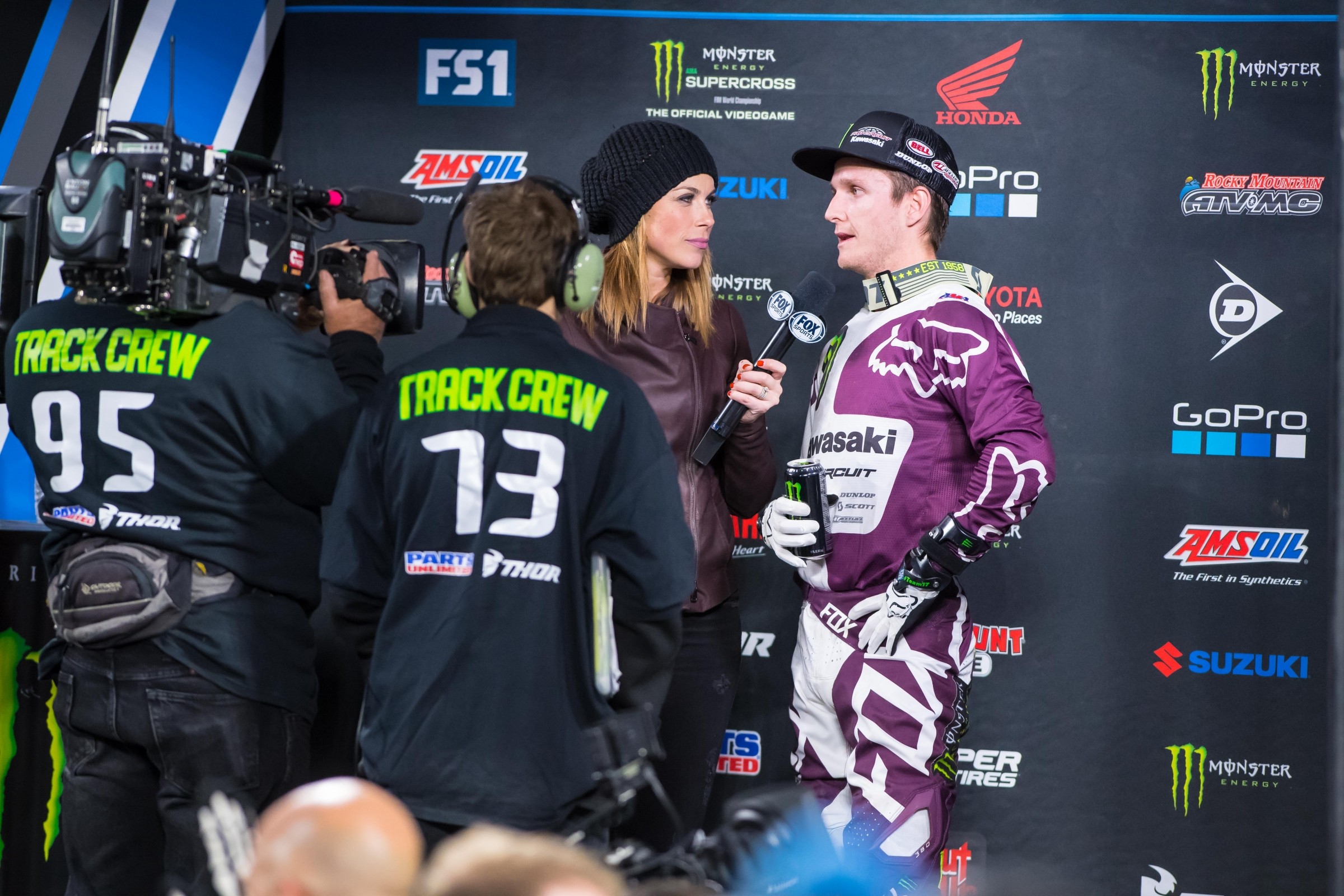 Being fortunate enough to be standing on a concrete slab deep inside Angel Stadium and watch the laps click off as Monster Energy/Pro Circuit Kawasaki rider Joey Savatgy closed in on race leader Chase Sexton, it was striking to witness how much it all meant to so many people. To see Mitch Payton, a man who has seen it all—and, more impressively, done it all—clapping his hands adamantly when Joey finally zapped the talented Honda rider for the lead was very telling.

Savatgy won the 250SX West Region overall at A2, and in doing so, made the inner circle that has been so close to him for quite a while ecstatic. With that, we sought out Savatgy shortly after his big win in Orange County, California.

Racer X: Joey, what are you up to this Monday afternoon after your big win at Angel Stadium on Saturday night?
Joey Savatgy: Not a lot, man. Just on my way back home from The Farm. Got a little bit of riding in this morning and it’s just a normal Monday.

So, you flew all the way back home to Florida after the Anaheim race?
Yeah, I’ve been flying back East back to Tallahassee every Sunday after the race. For me, I prefer being home and staying on my program back East and staying in an area and environment that I’m familiar with. I feel like I’m the most productive when I’m back here, so that’s the way to do it.

Probably a lot easier to pack your bags, go to the airport and get on the jet and fly for five hours when you win, huh?
Yeah, it definitely makes the Sunday a lot easier. I don’t necessarily know about waking up early to fly home—especially from the West to the East. You get up early and you fly all day and you get home late. All in all, though, I get to be home Sunday night and sleep in my own bed and stay on a routine, so that’s the main thing.

Well, that brings up a good question: when you sat on the airplane all afternoon yesterday, what did you think about when you reflected on your race Saturday night at Anaheim?
Obviously, it was good. We were fast in practice and we executed the starts. I think with the class being as stacked as it is, and with the track like it was this Saturday, where there wasn’t a lot of separation—it was a really good race track as far as keeping everyone tight and close—I think starts went a long way and we were able to get those on Saturday and go 1-2-1 and get the overall. All in all, I was happy. Obviously, there are always things that I wish I would have done better, and I know it sounds weird to say that because we had a good weekend, but for me specifically, there are always little areas on the track that I wish I would have done better or had a different line for. I’m always critiquing myself just because I want to get better, and there is always room for improvement.

For me, I’m stoked. I haven’t got a win in supercross since last year at Minneapolis. To kind of get that monkey off my back and get into a flow a little bit, I’m happy with everything. There’s always more on the table and there is always room for improvement. So, for me, on that plane ride, it was kind of just thinking about things I need to work on this week and get better at moving forward.

What do you think you need to work on? Going 1-2-1 is a pretty good day on the job in your line of work.
I don’t necessarily know if I’m going to give out all the details… I’d say right now there are four of us that are consistently top-four in practice, and I think out of the four, there are areas where I feel like I’m giving up the most amount of time. Like I said, that’s just something that I need to work on and try to get better at and try to bring it to the track on race day.

Who are the four guys you refer to?
I hate to leave anybody out, but right now I’d say it’s my teammate Adam [Cianciarulo]. He had a big crash on Saturday, but he still showed that he’s fast. [Aaron] Plessinger has shown that he’s fast, and [Shane] McElrath has had the red plate. I would say that there are four of us, for sure. And I don’t want to leave Christian Craig out of there because at times, he had shown that he is very fast and can win. He’s won before. Like I said, there are four or five of us that I think have shown week-in and week-out that we’re fast and competitive.

You’ll have to correct me if I’m wrong, but the three-moto format on Saturday night seemed to play right into your hands. Starts and all, you were totally on-point the entire evening. What do you think?
For me, I think that format has potential. I think from the spectator perspective, I think people loved it. If you think about it, there is more racing. I guess, if you think about it, there are four extra races. The 450s and 250s, we each have three mains. I think the first main needs to be a little bit longer and the last main a little bit shorter, just to keep the racing a little bit tighter. I thought it was good. And the biggest thing for me was that we struggled in that second main event, I tightened up a little bit and didn’t have good line choices, but I was able to finish that and still get second. Then I went back to the rig and was able to kind of think about it and fix the thing that I need to fix and then go back on the same race track that same night and try to fix it. Normally, if you have a bad race or you don’t have the greatest lines, you finish the main event and you’re like, “Wow, that wasn’t very good. I wish I could go back and try it again.”

Like I said, starts are crucial, and I’ve always been a good starter and I think being consistent definitely pays off. This weekend, our starts were very good; I don’t think we were worse than maybe coming around the first corner. You get good starts like that you put yourself not only in a position to win, but you put yourself out of harm’s way. You know you’re up there with guys who obviously have the speed to be up there, but you’re up there with less people around. I think with this format, starts are very crucial. I knew that coming in and I just told myself from the beginning that starts were going to be very important. That’s how I went about it.

How do you like starting off those new stationary launch pads?
That’s been something that has been up in the air. We’ve kind of talked about it within the team a little bit. Ricky Carmichael and I have also talked about it. I still believe that if you are a really good starter, you’re going to get off the gate good and you’re still going to be a good starter. The metal grates have, for sure, eliminated some wheel spin. In other words, the consistency off the start is going to be the same every single time. The gate is going to be exactly the same. Like I said, if you’re a good starter, the good starters are always going to find their way towards the front.

Here’s an off-the-wall question: both Johnny O’Mara and Ricky Carmichael have told me that good starts are almost owed to the best racer. In other words, if you’re the best racer out there, that start is owed to you. At first that didn’t make sense to me, but now it sort of does. What do you think?
I definitely feel that way, especially since we put in a lot of work. I know how much work I’ve put in over the off-season with Johnny O’Mara and Ricky Carmichael and Jeanie Carmichael at the track, and we show up on race day and all of it is definitely on my mind. It’s like I deserve to put myself in a position to win, or at least give myself a chance to win. That’s just kind of the mentality that you show up with. You know, you show up knowing you put in as much work, if not more work, than everyone else on the gate, and you deserve to, at least, give yourself a shot at a good start. I definitely agree with that—even if it’s just kind of a mentality thing.

That third and final race on Saturday night was a thriller. I watched it with Mitch Payton and a host of other Pro Circuit team members and we were enthralled the whole way through. I felt like you really earned that win. What was going through your mind in that last moto?
It was good. Like I said, there were areas where I didn’t feel that great all day. Chase Sexton was up front early and I was content with following him for a couple of laps, just to kind of find a little bit of a flow. Then I saw Craig, Cianciarulo, and a few other guys behind us. We had a little bit of a gap over those guys at first, and then as the laps went on, they started really catching us. By then, I was like, “Man, I’ve got to go. These guys aren’t waiting around. I’ve got to go now.”

Coming around for that white flag lap, I just tried to make the last two sections mistake-free and I did, and a win is a win. I always want to win, and I’m sure the fans enjoyed it. Like I said, from the fans’ standpoint, I don’t see how the format as not a hit, simply because it was such tight racing three times in a row. I’m sure it was enjoyable to watch.