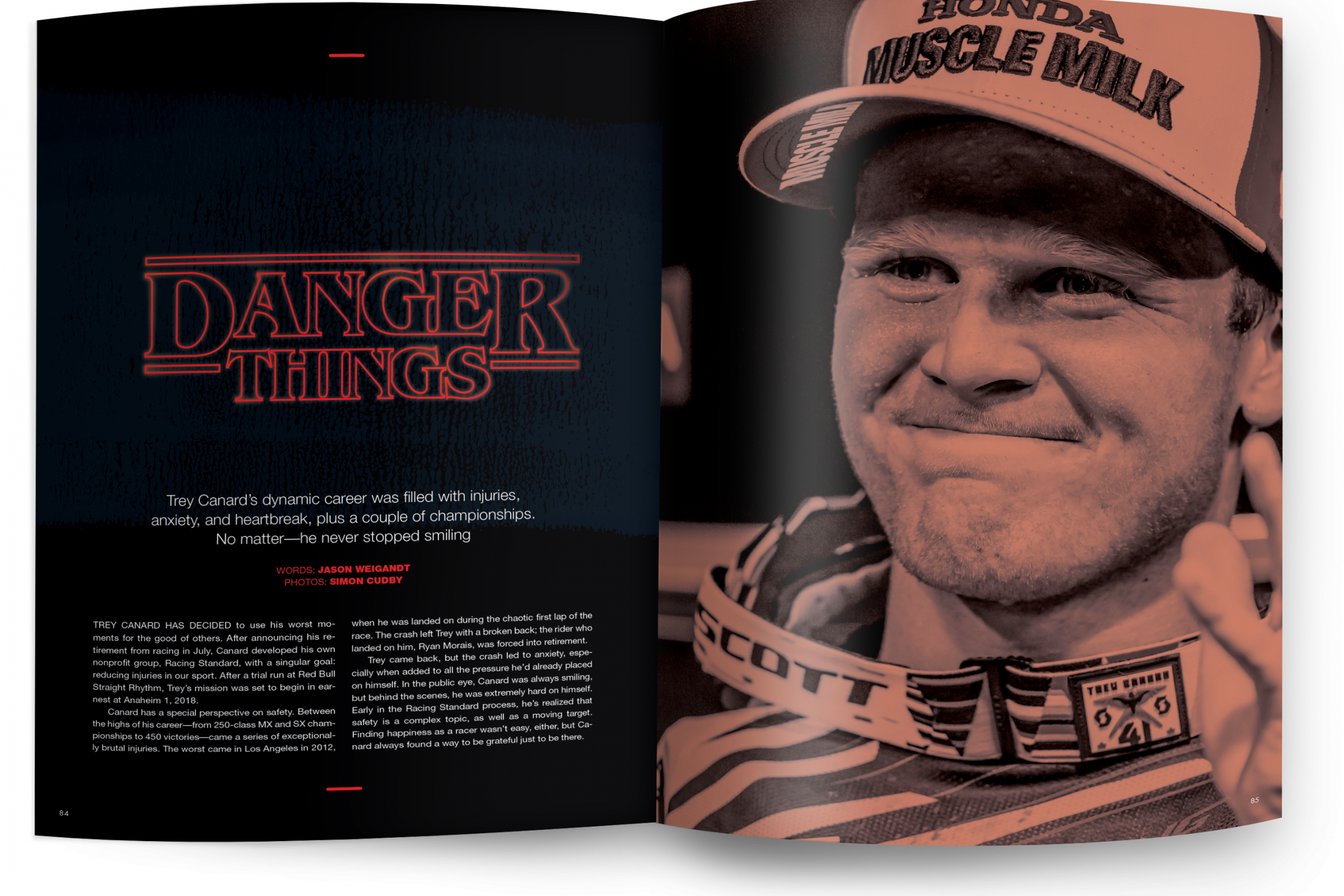 In the Mag, Danger Things

Pick up the March issue of Racer X Illustrated now and read about the rider we used to call the fastest man on the planet—James Stewart—and France becoming the favorite of the Motocross of Nations. Also read about Monster Energy/Pro Circuit Kawasaki and their 2018 SX title chase, the 46th Annual Thor Winter Olympics, and how Justin Cooper became one of the top prospects in the 250F class this season. Subscribe today.

There’s a familiar veneer riders use to protect themselves in the mental game. While we appreciate transparency, riders can’t advertise doubts and confidence issues to their competitors or sponsors. So, they smile they say everything is great, “best shape of their lives” and the rest. We lived this two weeks ago at Anaheim 1.

Once the racing is done, though, the real facts can come clear. Trey Canard spent far too much of his professional career injured, but when he was racing, he knew it was best to deflect from that topic. Now that he has retired, he can reveal the truths that were always kept within his inner circle.

Trey suffered a career-threatening injury at the 2012 Los Angeles Supercross, when he clipped a Tuff Block cover on the first lap and was unable to clear the big triple. When he rolled the jump, it left Ryan Morias hanging in the air with nowhere to go. Morias landed on Canard, and they went down in one of the scariest crashes every witnessed at a supercross. Morias suffered a concussion and never raced again (he’s now a test rider with KTM). Canard broke his back, but he smiled publicly through his recovery and said he would return to racing. He did—almost triumphantly—in 2013. While he would indeed get back to his old level and win races, such highs and lows left him with many stories to tell. Now, he’s willing to talk about it.

I originally interviewed Trey regarding his new endeavor, Racing Standard, in which he hopes to improve safety at the races. Our conversation drifted to his career in retrospective, though, with talks about the dark moments and bright lights that dotted his decade as a pro. From the anxiety of facing his fears of getting injured again to the euphoria of getting back to the top of the podium in 2014 to his overall outlook on racing—he admits now he took it too seriously, and was too hard on himself—it’s an honest look at what life is really like at the elite level.

Check out the latest issue of Racer X Illustrated for this exclusive interview.