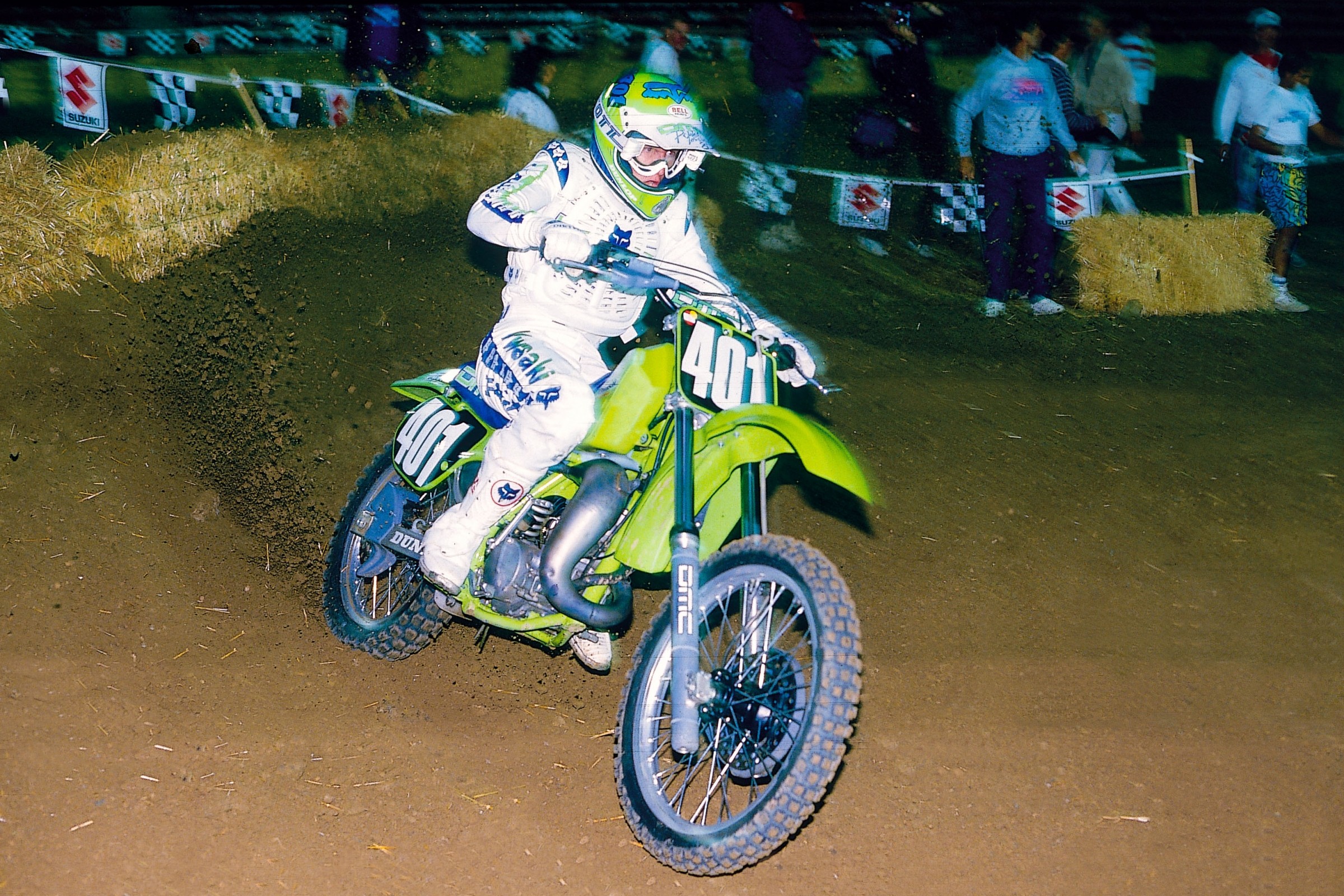 On This Day in Moto January 17

James Stewart and Ryan Dungey were the 450 and 250 class winners at the second Anaheim Supercross. It was enough to extend Dungey’s points lead, but Stewart still had some work to do after crashing out of the Anaheim opener a fortnight earlier, and defending champion and Suzuki rider Chad Reed was definitely up for the battle—he came from 19th place after an early spill to finish second only to Stewart.

Interestingly, Monster Energy Kawasaki's 450 SX rookie Ryan Villopoto had his first good night on the big bike, finishing fourth. "I still have a little stuff to work on here and there, but I think I have a decent pace to run with those guys," said RV afterwards. "Definitely for a while, but I'm not going to say the full 20 laps. It seems like Chad is on it right now—he can turn some times. It's going to take a little time to catch Chad and Stewart, who was a little off the pace tonight, but then again, he didn't have anyone chasing him."

American Honda announced that they had signed a historic deal with WMX riding star Ashley Fiolek to be on the full-factory team alongside Andrew Short, Davi Millsaps, Ivan Tedesco, and Ben Townley. The 18-year-old Fiolek was the reigning Women's Motocross Champion.

Ohio's own Jeff Gibson raced to the AX class win in front of a sold-out Ervin J. Nutter Center in Dayton, Ohio. The AX Lites winner was another Ohio native, Josh Demuth.

Jo Jo Keller went 2-1 to win the 500 Pro class at the notoriously rough Diamondback Raceway in Cocoa Beach in the Florida Winter-AMA Series. Bob Hannah, a regular visitor to the series throughout his career, won the 250 Pro class, and local prospect Bobby Jay Mann bettered Keith Bowen and Keith Turpin.

The third round of the CMC Golden State National Motocross Series at Hollister Hills, California, was cancelled due to rain.

One week after a disappointing AMA Supercross debut with Honda—he finished 16th at the Los Angeles opener—Ezra Lusk bounced back big at round two. He topped Chaparral Yamaha's Jeremy McGrath inside the Eighth Wonder of the World, better known as the Houston Astrodome. Defending champion Jeff Emig would finish third, one of his best rides of a turbulent (and ultimately unsuccessful) title defense.

The 125 class win at the Dome went to Yamaha-mounted David Vuillemin, followed by FMF Honda’s David Pingree and the veteran John Dowd.

Donny Schmit was born in Minnesota. The future AMA Motorcycle Hall of Famer would enjoy a nomadic career, working his way up through the amateur ranks as Loretta Lynn’s champion. He would then have immediate success as a 125cc supercross and motocross rider, winning the West Region as a rookie with Team Suzuki, as well as a couple of 125 Nationals in his sophomore season. But after moving up to 250s, Schmit found that he was not as comfortable indoors as he would have liked to be and ended up racing the 1989 outdoors-only, finishing fourth in the final 125 National standings while racing as a full privateer. Without an AMA ride, he decided to take an offer in Europe with Sylvain Geboers’ Suzuki team alongside a young Stefan Everts. Schmit ended up winning the 1990 FIM 125cc Motocross World Championship. Two years later, riding for Michele Rinaldi’s Chesterfield Yamaha team, he won the 250cc Motocross World Championship.

Sadly, in January 1996, shortly after his retirement, Schmit was struck down with a rare blood disorder called aplastic anemia. He was posthumously put in the AMA Motorcycle Hall of Fame, where his ’90 championship bike is still on display.

Carrie Coombs-Russell was born in Morgantown, West Virginia. After her own racing career didn't pan out, she studied journalism, worked for Cycle News, Dirt Bike, and Dirt Wheels, went to law school, married AMA National Enduro champion Jeff Russell, and is now the CEO of MX Sports Pro Racing, as well as organizer of the Grand National Cross Country Series, ATV Motocross, and the Loretta Lynn's AMA Amateur National Championship. However, her proudest achievement is being the older sister of 1988 Blackwater 100 champion Timmy Coombs.