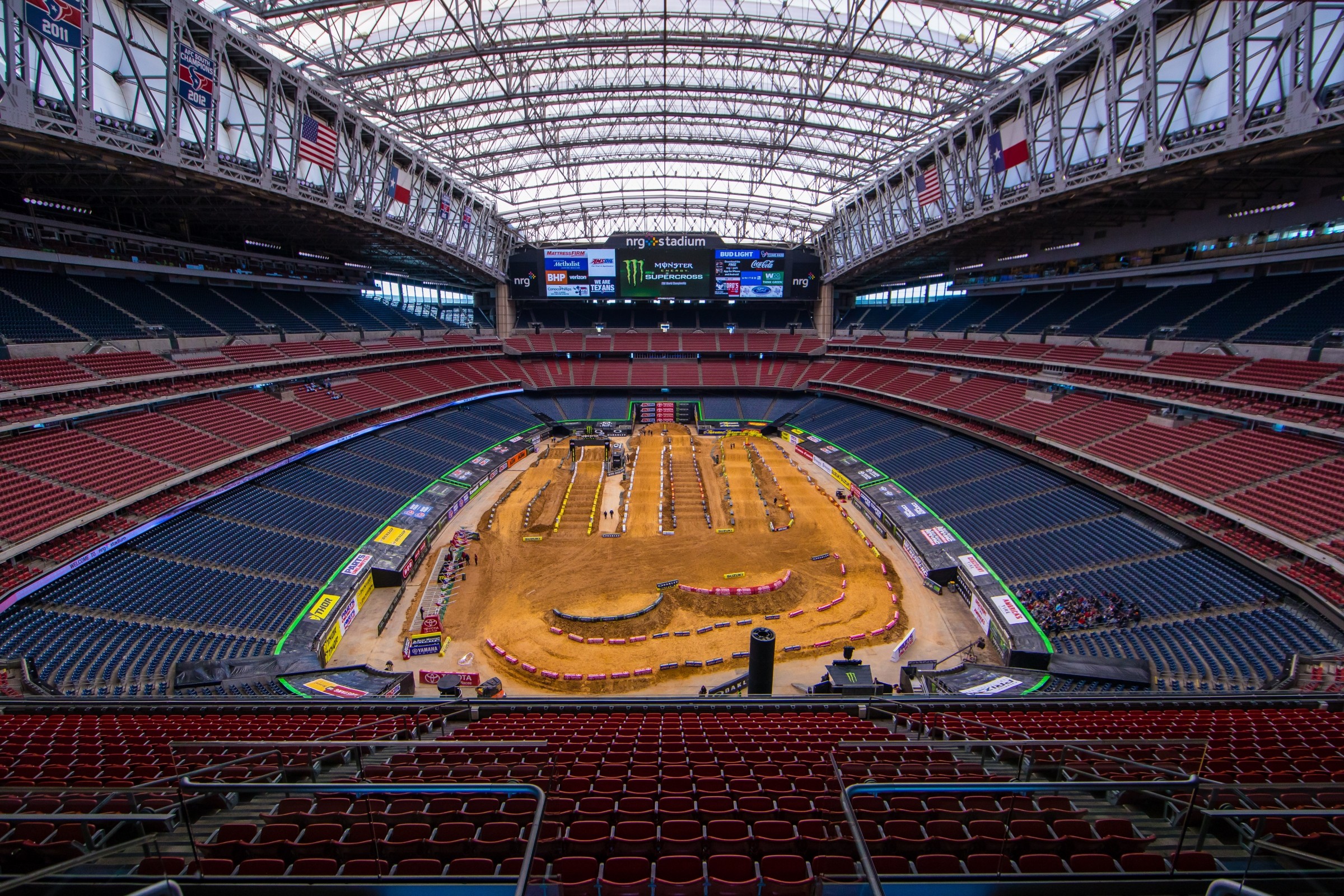 3 on 3 Questions from Houston

1. With Wilson, Musquin, and Tomac all suffering from shoulder injuries, the chorus of "Why don't these guys WEAR shoulder protection" will begin anew. Are there really protection options out there that protect the shoulder from significant impacts? Have you ever tried them? Do they restrict movement?

Jason Thomas: With all of the different variations of shoulder protection, to think that one of these wouldn't have lessened or possibly even prevented these injuries would be foolhardy in my opinion. The other side of that is riders are always looking to feel very loose and free when riding, especially in supercross. Anytime you add protection, you typically lessen that free feel. That's where the balancing act comes in between achieving the feel riders want, but also protecting themselves from preventable injuries. I have tried several different products from several different companies and they all work a little differently. Bottom line, each rider has to make that decision for themselves and live with the consequences.

Ryan Sipes: The only piece of gear that I think could help with shoulder injuries is the chest protector, and only if you leave the football-style shoulder pads on. Even then, it would only help in a certain type of crash where you went down directly on the shoulder. In Musquin’s case, it wouldn’t have helped at all, since he actually hit elbow first and that’s what cranked his arm back and out of socket. I’ve had a million shoulder injuries over the years, with and without a chest protector on. I think the shoulder injuries these last few weeks are less about more protection and more about less crashing. Riddle me that.

David Pingree: The shoulder is a tough joint to protect in the motocross realm. Anything built to actually offer protection is so bulky that riders wouldn’t wear it. There is great chest and back protection that doesn’t restrict movement, but most of them offer little to no protection for the shoulder. The old HRP and Fox chest protectors of the eighties and nineties were popular with pros and amateur riders alike. But once the top pros stopped wearing them, the kids who looked up to them followed suit. This decision needs to be made by parents and team managers. If you are spending millions on a team and riders, you’re a fool to let your rider swing a leg over the bike unprotected. I always ran a front chest protector and it was never restrictive. I still use an under-the-jersey TLD chest protector that is practically unnoticeable. You don’t feel as free and “loose” as you do with nothing, but you’re much better protected.

2. Jason Anderson and Marvin Musquin are no longer riding together much, but everyone in their inner circle swears they still get along and do their off-bike training together. Marvin's injured at the moment, but in general, what do you think of having riders of very similar speed and ambition working together? Please note that Aldon Baker's multi-rider program has been relatively tension-free the last few years.

JT: As a general rule, the odds of this going well are low. There is so much at stake at this level, and to think that riders could put all of that aside and work together tension-free is unlikely. The biggest difference in my opinion is that the dynamic changed a bit this year with the departure of Ryan Dungey. I think Ryan had an "alpha" placement in that program, as did Ryan Villopoto before him. With his retirement, that spot is up for grabs. Both Marvin and Jason are both looking at this title as theirs for the taking. With that much money and glory at stake, to think there is tension at the top is common sense.

Sipes: Guys at this level riding together has never happened until the Baker’s Factory came into existence. Can you imagine Reed and Carmichael doing motos together? I can see the text now: “Ah man, you got me today, but I’ll get you this weekend… winky face emoji.” That wasn’t happening. In their prime, those guys hated each other with a passion. There’s no way those guys would ride together, let alone have the same trainer. I had my doubts about K-Roc and Villopoto both working with Aldon Baker back in 2014, but they made it work—for a while. Eventually Roczen felt it was better for him to do his own thing. Last year, Dungey was the reigning champ, the rest of the guys were hopefuls, and it worked. Now that Anderson and Moose are both alpha dogs, I wonder how long them riding together will last.

Ping: There is usually one rider who is slightly better than the other when riders pair up this way. It certainly elevates both riders’ games, but egos are fragile and these partnerships get super weird at some point. Rick Johnson and Jeff Stanton made this work, as did Johnny O’Mara and David Bailey, but you don’t see a lot of evenly matched guys pairing up in recent years. Marvin and Jason are both pretty mellow, friendly guys, so this is a situation that could work.

3. Wildmen Anderson and Justin Barcia have been calm and patient so far this year—Barcia even fixed his mistakes after getting wild for a few laps in the main event, eventually repassing Cole Seely for third. The teams have been preaching patience to both riders and it's paying off. But how hard is it to remember that in the moment when you're battling up front?

JT: I think it differs for everyone. For Dungey, it seemed to be easier than most. He kept an even keel in most scenarios and it paid off in spades. Both Anderson and Barcia both have a propensity for rough riding that eventually ends up biting them at some point. Learning patience is definitely possible, but they will have to continually evolve this skill over the course of a championship-winning season. Anderson will have to avoid the run-ins we have seen with Cole Seely and Vince Friese, for example. One bad weekend because of that nonsense can derail a season’s worth of good decisions.

Sipes: I have been pleasantly surprised with these two so far. I fully expected Anderson to rough some guys up on his way through the pack last weekend. He was forceful when he needed to be, but nothing dirty. Same with Barcia. I am sure the teams are on these guys about being smart, but I think some of it is them getting older, knowing a golden opportunity to win is right in front of them. Both Anderson and Barcia are fast enough to win right now without decapitating people in every corner. With Musquin and Tomac back in the points, these guys know they have to make calculated decisions out there and take advantage of being some of the "healthy ones”. Now, when someone chooses to try and decapitate them, the story might change a bit. Not going ballistic while getting T-boned is harder than a diamond in an ice storm. Not if, but when, it happens, it will be fun to watch.

Ping: The key is to keep the emotion out of your riding. Both of these guys let emotion dictate their riding at different times in their careers and it has hurt them. If a rider slams them, block-passes them, holds them up, or simply frustrates them, these guys have a history of going full spastic. Sometimes that works, sometimes it doesn’t. It almost never makes friends, which creates more problems with those riders down the road. This year, it seems as though both riders are keeping their emotions in check and riding with talent and tact. If they can maintain that throughout the series, they will be in this title fight to the very end.