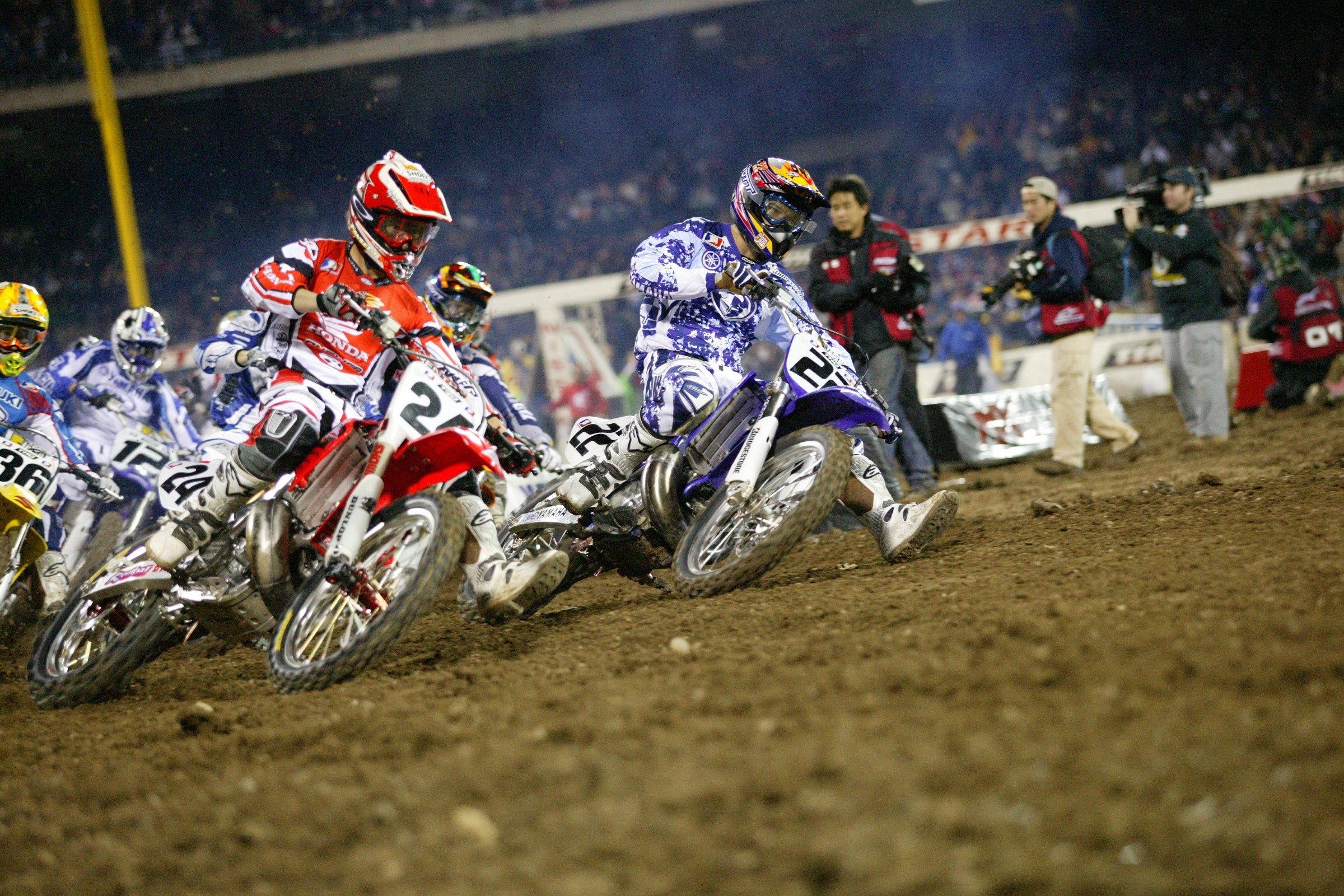 On This Day in Moto January 3

The 2004 AMA Supercross Championship gets underway without its three-time defending champion Ricky Carmichael on the track. Honda’s Carmichael had crashed in November while preparing for the series, injuring his knee. The Anaheim podium is swept by Team Yamaha riders Chad Reed, David Vuillemin, and Tim Ferry.

In what's still called the 125cc Class, Pro Circuit Kawasaki's Ivan Tedesco wins in his debut with the team, topping Honda factory rider Nathan Ramsey and his own Kawasaki teammate Stephane Roncada. Unlike the previous year, when there were still mostly 125cc two-strokes in the class, 250cc four-strokes dominated the field. Part of the reason in hindsight was general evolution, but in the short-term, it was also aided by the fact that the AMA had implemented a new unleaded fuel-only rule that affected the power of two-strokes more so than the four-strokes.

"The four-strokes definitely have an advantage because they run better on lower octane fuels, where the two-strokes need more octane so that they can run more compression and more timing because they are a little bit down on power compared to the four-strokes," explained VP Fuels' Bruce Hendel of the blends most of the teams were now using in a Cycle News article.

The top 125cc motorcycle in the main event would be Motoworld Suzuki's Andrew Short. No 125cc motorcycle would ever win a 125 West Region main event again, but because James Stewart chose to ride a KX125 in the East Region, plenty more wins would be coming there the following month.

In a wild Anaheim opener, JGR Yamaha’s Josh Grant wins the main event after James Stewart and Chad Reed tangle, Reed’s front tire touching Stewart’s back tire in the whoops, and then Kevin Windham hits the downed Stewart. Afterward, Stewart can’t start his bike and DNFs the race, though he will ultimately win the 2009 AMA Supercross Championship.

"I'm fine, I'll be back next weekend," Stewart said afterward at the press conference. "We just have to go back to the drawing boards. Obviously this is not the way we wanted to start the season, but we're going to just keep plugging away. I've got a lot of motivation to keep on going now. It's our first loss on the Yamaha, but this will help us in the long run. Everything was going good. I felt like I was the fastest today, so there's nothing to hang my head about. We just started 25 points lower (than expected) so we're just going to have to make that up. Ricky (Carmichael) did it a few times."

In a sign of things to come, Yamaha factory 450 rider Broc Hepler had to pull out after he crashed in practice and suffered a broken collarbone and a serious concussion. His team reported that he may be out for up to four weeks.

In what was then called the Lites class, Monster Energy/Pro Circuit Kawasaki riders Jake Weimer and Ryan Morais finished first and second, while Makita Suzuki's Ryan Dungey salvaged third after having to qualify through the LCQ after his team had to switch his motor out twice. Dungey was also involved in a little dust-up with his nemesis Jason Lawrence, the defending West Region Champion who was now riding for his own Boost Mobile/ampm/Monster Energy Troy Racing team, but with no mention of Yamaha, who had become displeased with him when he missed the previous year's supercross banquet and the award of his #1 plate. Lawrence also showed up in One Racing gear, which did not seem to go over well with Dungey, who had also just signed a contract with the San Diego-based brand. Lawrence ended up crashing in the main after tangling with GEICO Honda's Trey Canard, and then was docked a position for cutting the track and ended up fifth.

Germany’s Ken Roczen wins the Anaheim Supercross opener aboard his Soaring Eagle/Jimmy John’s RCH Racing Suzuki RM-Z450, giving the team and owners Ricky Carmichael and Carey Hart their first-ever win. It was the second straight year that Roczen won the opener—in 2014 he did it aboard a KTM, and then he did it again in 2017 on a Honda. He is the only rider ever to win the AMA Supercross opener on three different brands of motorcycle.

"It feels great, obviously,” said Roczen afterward in the press conference.  “I just think this year I came into the first race with a different mindset. I knew how good I felt, and I have so much confidence on the bike that it was just a whole different thing."

In 250SX , Troy Lee Designs/Lucas Oil KTM rider Jessy Nelson took his first-ever main event win over Rockstar Husqvarna rider Zach Osborne and Monster Energy/Pro Circuit Kawasaki's Tyler Bowers. It was an especially big win for the TLD team, which had switched from Hondas to KTMs during the off-season. Here's what Jessy's race looked like:

“It feels amazing,” said Nelson after leading the 15-lapper from start to finish. “This is my third season in supercross. First two I came in injured, and this year I came in healthy and feeling great. I told my mechanic this morning, 'I’m going to win today.' He said, "All right!" I figured I better back it up otherwise I seem like a jackass... A win like that, they’re hard to come by. I’ve been trying for three years. To finally get it, it’s huge. The feeling’s unbelievable. It’s hard to explain. It’s just so surreal.