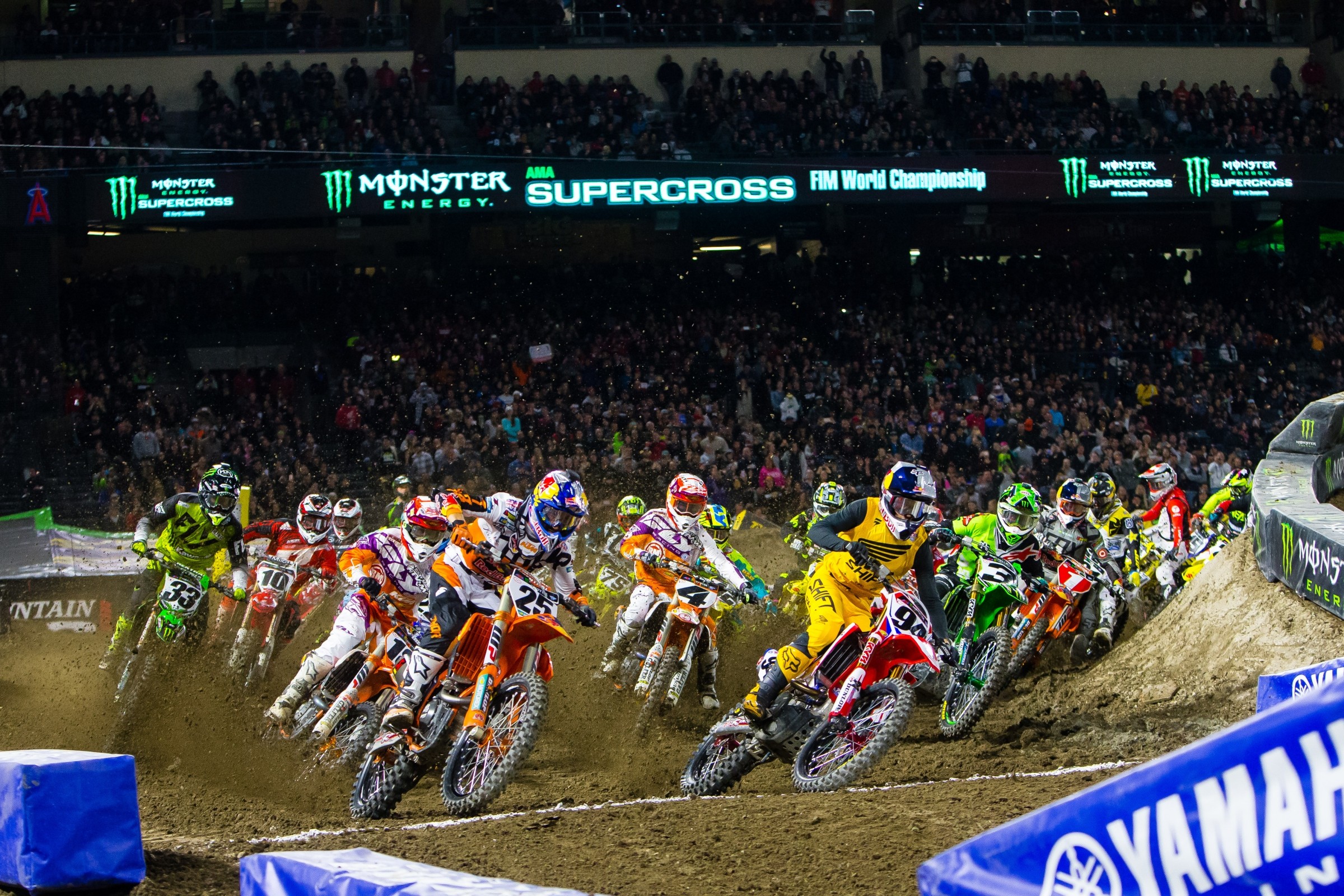 3 on 3 Questions for Anaheim 1

Jason Thomas: I have been mulling this over for a month or two. After all, I correctly predicted the title winner in 2015, 2016, and 2017. Humble, right? Anywho, I think I have to go with the man who won over half of the races last season. Without Ryan Dungey in the series, he would have won the title going away in 2017. Newsflash: Ryan Dungey retired, so I like Eli Tomac to take what he probably feels like is his for the taking. Ken Roczen and Marvin Musquin will be good and will both win races, but with Kenny's injury and Marvin's lack of race wins last season, I will take Tomac with the smart money.

Ryan Sipes: I think Tomac wins it this year. He knows he can win, but also knows how to throw it away, and I think the missed opportunity from last year has motivated him. Other than Monster Energy Cup and MXGP—the races he was contracted to do—he has been quiet since winning the Lucas Oil Pro Motocross Championship title. I think Marv will be fast and win, especially early in the year, and I think Kenny will win races but be too inconsistent coming off his injury. Ultimately, I think Eli brings home the title at the end. Sounds weird to say, but I don’t think Tomac wins the most races. I think he will be solid at the beginning, let everyone go first in the @#$* measuring contest, then be the strongest guy to finish out the season, a la his 2013 250 Lucas Oil Pro Motocross run. I say it's another super tight points race coming into Vegas, which means more fun for us!

Steve Matthes: First of all, welcome to Ryan Sipes in contributing to Racer X. What a roster of greats we have with Ping, JT, and now Sipes. Of course, none of them have a Summercross title… wait, well, Ping does. Anyway, yeah, the 2018 450SX title, I think it's got to be Eli Tomac. He won so many races last year I don't see how you can go with anyone else as the favorite. You may think Marvin Musquin or Ken Roczen will win it, but that's going against the odds. In speaking to Tomac this past Monday night, it seems like he's ready to go and is going in with last year's setup, more or less (the one he used after the first three races) and seems like he knows it's his time. That's general sports media BS in a way, but I think it's time for him. He broke through his 450 title jinx last summer and he's ready. He's gone DNF-4-5 at his three Anaheim 1's on a 450, and I think he’ll change that narrative this Saturday.

2. How weird and different is the opener compared to all of the other rounds?

JT: Anaheim 1 is so full of unrealistic expectation and nerve-filled anticipation that it causes erratic results. Everyone is dealing with jitters on some level and it typically leads to riders riding tight. Sometimes riders try way too hard or simply make bad decisions. Carmichael's A1 crashes (2002, 2003, 2006), Chad Reed and James Stewart's tangle (2009), and Eli Tomac's struggles last year are all great examples of how things tend to go sideways at this round.

Sipes: The riders will tell you (and themselves) in every interview that “it’s just another race.” But it’s definitely different. There is more energy, more hype, and more unknowns about this race than any other throughout the year. Riders, mechanics, team bigwigs, and fans all feel it. Everybody is super fired up because SUPERCROSS!!! is here, but they're also nervous, anxious, secretive, and, sometimes, worried. I raced A1 quite a few years and came in feeling different every time, from scared out of my mind (not ready) to super confident (solid, prepared). You would think it’s obvious which approach produced better results, but Anaheim didn’t care how I felt. The year I should have won (2006, really fast and on a factory bike), I finished 19th. On the other end, every few years a guy will dominate the opener and take their first career win. You just never know what will happen at A1, and that’s why I’m so excited every year to watch it.

Matthes: As the other two racers elaborated, it is different. The track's a little easier than the others, the nerves are high, the decision-making is sometimes shaky, and, yeah, weird stuff happens. I know from the mechanic end of things that you'll test and test and test some more all off-season, but on a different track, under the lights and on different dirt, you'll sometimes realize you'll need to adjust what you thought was a perfect setting. Also, the riders are pushing harder than they did during the week, so that changes things. If I'm one of the "big four" dudes or a Cooper Webb, I'm just telling myself to get a top five at the opener and go from there. Do not panic if you don't win the thing.

3. Is there a rider, a factor, or something else that everyone has overlooked in all the talk about the upcoming season?

JT: I think the one X-factor that really hasn't been seen yet is the new KTM and the new Husqvarna that both teams will be racing on this Saturday. The teams haven't had a ton of testing on the new bikes, so there might be some growing pains early in the season. Marvin Musquin was simply on fire in late 2017; will he be even better on the new bike, or will it take a bit to sort out? Jason Anderson will be in the same boat. Ken Roczen's Honda and Eli Tomac's Kawasaki are virtually the same and they should be very comfortable with their setup. If they need to make changes, they will have a lot of data to draw from to move in the correct direction. Will the same be true for the Austrian super teams?

Sipes: McGrath and Emig will be strong for sure, but if LaRocco gets the start…just kidding. I think Dean Wilson will be strong this year and surprise some with his raw speed. Dude can throw down when he’s feeling it. He had a rough few years with injuries, but I was really impressed with his riding this past year with the Rockstar Energy Husqvarna team. He rode smart, stayed off the ground, and slowly built his way to top three finishes by year’s end. Now he’s had a real off-season to test and get comfortable on a great bike, he’s training at Baker’s Factory, and he’s been healthy for a year. I’ll bet on that guy. If you have ten minutes to kill, look up 2011 Lucas Oil Pro Motocross 250 class videos and you can be as excited as I am to watch a healthy Dean Wilson this year.

Matthes: MULTIPLE WINS FOR SEELY. That was my hot take from last year, and Cole had a good year but didn't pull that off, which Weege and JT still like pointing out. I feel like we've talked about everything out there, but something that I think is interesting is there's going to be some pissed-off riders and managers Sunday morning. Think about these guys and how they would be absolutely pissed that they're not in the top ten: