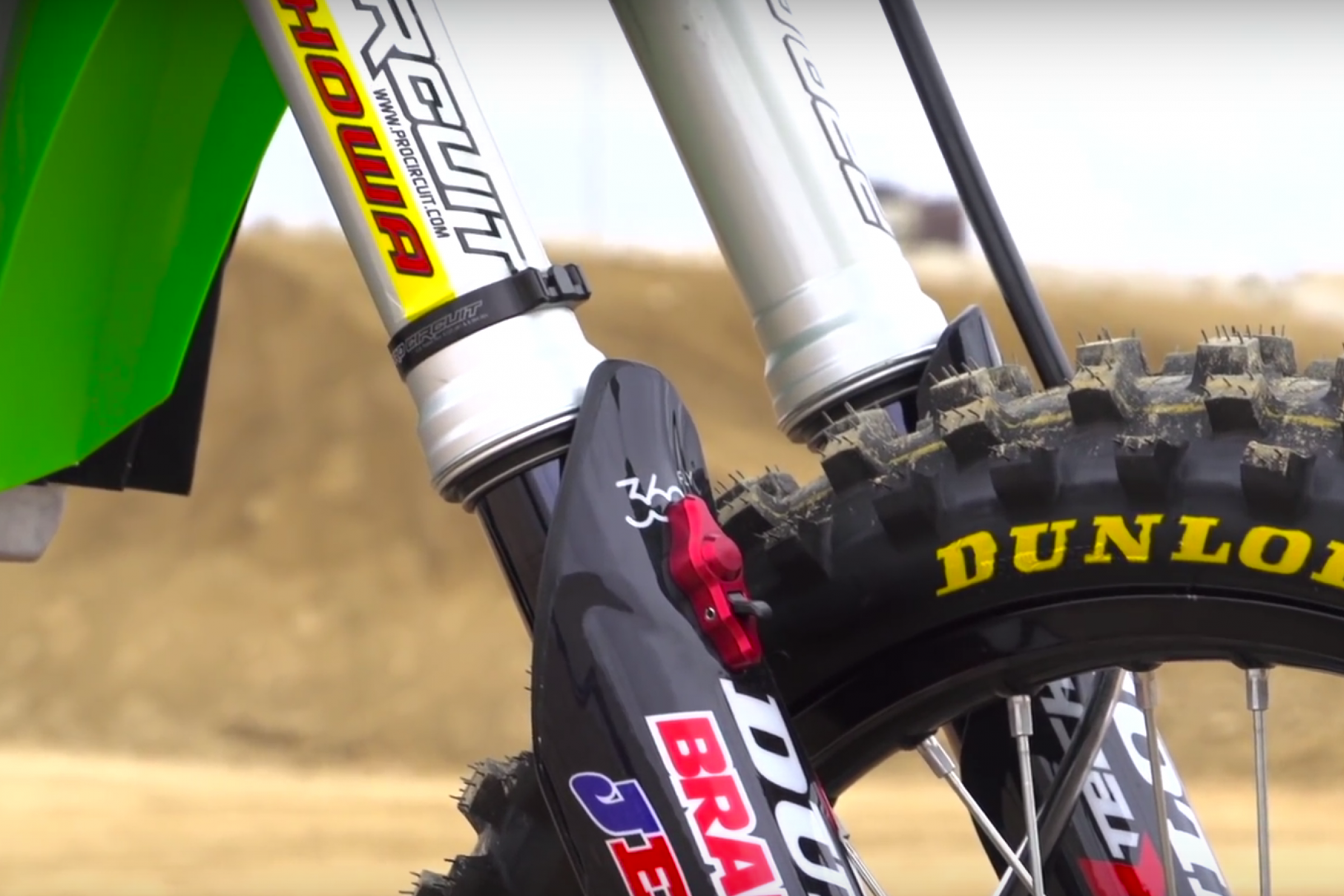 In a recent video test (see the link below), we rode a Kawasaki 450 built by the gang at Pro Circuit. The bike was mind blowing, with the exception of the TAC air fork that comes stock on that bike. In the test I couldn’t get the fork to feel the way I wanted, which is honestly the way I feel with every Showa and KYB air fork I’ve ever used. After hearing my feedback, Jim “Bones” Bacon at Pro Circuit (their long-time suspension guru) asked me if I’d go back out to the track with him and work on it. I didn’t really have the time but I know he wanted to change my perception on that fork so I made it work.

We tried several forks back-to-back and, of course, Bones wouldn’t tell me which fork was which. This is your typical blind test. At the end of the day I chose the spring fork conversion kit that Pro Circuit mounted into the Showa TAC fork. There is still a small element of air to it, but the spring controls the action of the fork and gives back the feel that I had been looking for on that bike. With very few changes to clickers, I had that fork feeling planted, stable, and plush in the small chatter without any initial harshness, something I can’t seem to achieve with the standard Showa air forks.

As I said, there’s still an element of air to the fork, so the Pro Circuit kit comes with an air valve that can be used to add just a touch of air to make the fork a little more progressive through the stroke for the faster, more aggressive riders, or even to compensate for special conditions, such as a mud race. It can also be run at zero pressure for the riders that don't want to mess with adding air in their forks. The kit also offers spring preload adjustment without taking the fork all the way apart, letting the fork ride a little higher or lower when needed.

If you aren’t happy with the way your Showa TAC forks are working, check out the Pro Circuit fork conversion kit. These completely changed the feel of the Kawasaki 450 I was testing and immediately gave me confidence in the bike’s front end again.

Have a look at our original test video and text below, and note the thoughts on the forks—the second test that I reference below is the one I cover in more detail here.

When Pro Circuit’s media relations director reached out to me and asked if I’d be interested in riding a 450 they had built, I thought about it for a fraction of a second, smiled from ear-to-ear and shouted, “Yes!” The Kawasaki is a great bike in stock form so to ride a bike that Kawasaki’s factory support team had built from the frame up had to be nothing short of works bike material, right?

Was the juice worth the squeeze? We trekked up to LACR for our first ride on the KX and it didn’t disappoint. The engine was unreal; power from the first crack of the throttle until you were going so fast your eyes were watering. It wasn’t uncontrollable power either. The clutch was completely unnecessary because the bike had so much torque—you rolled the throttle on when you wanted to go and it responded. The shock worked really well but I was having some problems with the fork on our initial test ride. I couldn’t get it soft enough for my liking and after a call to Bones and some digging, they realized they had an old setting in the fork from earlier in the year. A second test ride with Bones sorted out any of the doubt I had about the suspension. They installed their spring conversion kit in the forks, which is a hybrid of spring with a little bit of air. The system allows for the feel of a spring with some of the additional tuning capability of air. After some adjustment, we had it working great and feeling very comfortable.

I didn’t want to give the bike back but after a few days I had to. Thank you to the folks at Pro Circuit for reminding me just how good a bike can work.