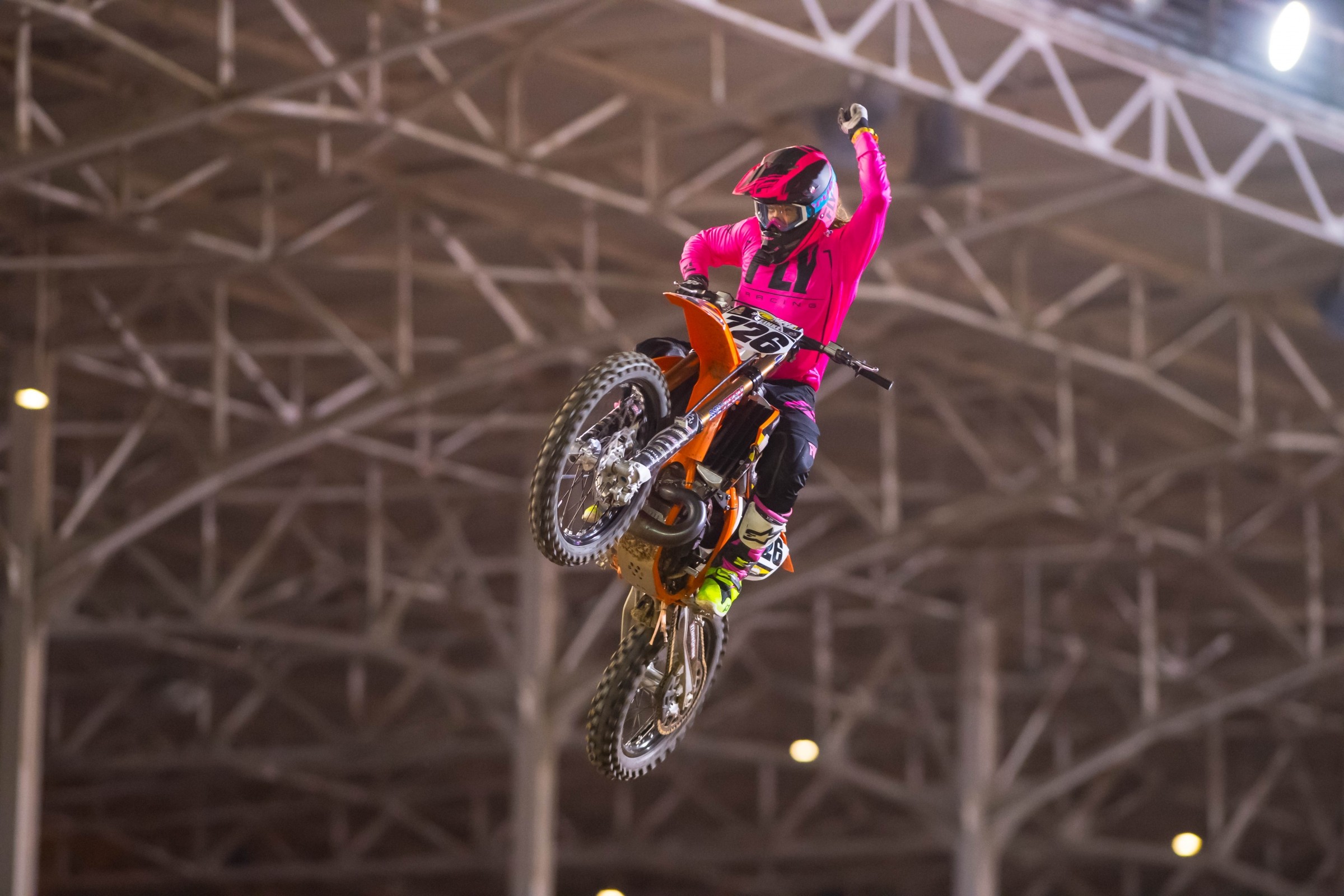 Two-stroke fans had reason to celebrate when it was announced there’d be a two-stroke class at this year’s Red Bull Straight Rhythm, and when racers like Chad Reed and Ryan Villopoto committed to the race, excitement and enthusiasm levels spiked. After all, who wouldn’t want to see two of the greatest supercross racers go at it for the win once again? Only that didn’t happen. When Reed pulled out after injuring his ankle on Friday, two-stroke specialist Gared Steinke pulled an upset win on Villopoto and went on to win the title in a wild final against Ronnie Mac. After waiting a few days for the fervor to subside, we gave the always jovial Stank a ring to see what life was like for the latest two-stroke champ.

Race X: Congrats on your win at Red Bull Straight Rhythm! How does it feel to be an official two-stroke champion?
Gared Steinke: Dude, I’m super pumped about it. It’s still an unreal feeling to me. I’m not shocked that I won, but at the same time, I’m kind of shocked.

Does this make you the official two-stroke king? I think you’re the reigning two-stroke king now.
Yeah, I believe so. Other than the 125 races, I think those are a bit bigger. It’s a bit more difficult riding a 125 versus a 250 two-stroke, but to win this event over a couple legends, yeah, I guess that makes me the two-stroke king.

Yeah, just go with it, man. You’re the king now!
For sure.

In all seriousness, and this is no disrespect to you or anyone else, but I don’t think anyone thought Ryan Villopoto was going to lose a single round. But you beat him, even after he beat you every single time in practice. What’d you do different come game time?
Going into the practice runs, I thought I should really try to push it going against Villopoto. I knew he was going to be the hardest guy to beat. So I pushed it in those three runs and he beat me every time by more than I’d like to have been beaten. I had my girlfriend filming for me and she was filming pretty much where he was gaining big time. I watched the video and I could see what he was doing. I picked up on some things he was doing that I wasn’t doing—watching the film really helped me go back and change things for the races. Those small changes helped me a lot.

What kind of small changes?
I saw how he would scrub onto the on-off tabletop sections, the ones at the end and the middle of the big rhythm section. He’d soak it up then hit the power coming off the tabletops. I was just trying to go with the flow in those sections, but once I added a little spice in the rhythm section there, that’s what really helped me out racing against him.

Did you guys talk at all afterward?
Yeah, he told me congratulations and that I rode well. He seemed a little salty.

Well, I don’t think he’s used to people who aren’t lappers crossing the finish line in front of him.
That’s true. I’m still kind of shocked that I beat him, he’s a multi-time supercross champion. I shocked myself.

How’d you end up competing? Both Steve Matthes and Jimmy Albertson are taking credit for your appearance. We need you to settle this.
Well, I was on the Pulpmx Show and Steve mentioned it first. Then Jeremy [Malott, of Red Bull] came on the show and said Albertson had said he thought Stank Dog should be in the show. So all three of them can take as much credit as they want, but as far as the money goes, that was Jimmy. He got some show-up money for me.

As long as we’re not giving Matthes all the credit. We don’t want to do that.
Well, we have to give him some credit, if I didn’t go on his show I don’t know if I would have even gotten the invite.

Did you ever think you’d be getting start money to go race your two-stroke?
Yeah, I get it when I race the 125 at some events.

Oh really? My bad, I had no idea.
Yeah, most of us privateers make some money that way. At local fair events you have to try to swindle some type of start money to make sure you earn some cash.

What’s been the reaction to your win?
Everyone, my family, girlfriend, mechanic, just everyone in my corner knew I could do it. And they’re all so pumped and happy for me and telling me I deserve it. I definitely feel I’ve been working a little bit harder than normal and it definitely paid off. But still, it hasn’t sunk in yet. I won, but I don’t even really feel like I won yet.

When we were setting this interview up you said you could do it after work. I didn’t even know you had a real job. What’s it like winning this race then going back to work?
Well, I am a full-time moto guy, but I help out my pops every once in a while with the tree service business. He needed some help so I went out and busted a little ass today [Tuesday].

Okay, that makes sense. That’s why you’re so good on a two-stroke. You go from racing one to cutting trees with one. Motorcycle to chainsaw, from one two-stroke to another.
Yeah, I do the Husqvarna blower too. The TE125 blower.

Is that what you’ll be doing in 2018?
I’ll be racing arenacross come January on a Kawasaki. But I’ll try to do some East Coast supercross races, there’s only a few conflicting dates.

What’s your annual fuel bill!?
Lately it’s been a lot cheaper. I’ve been getting some sponsor money and getting some people to help pay the gas and parts bills that go along with the racing. That’s been a big help the last two years, but the gas bill, for the rig, is probably about $20,000 to $25,000 per year.

Thanks again and congrats on the win at Red Bull Straight Rhythm.
Yeah, thanks. I’m still super happy about it, super pumped to make $10,000. That’s probably one of the biggest paydays I’ve ever had from a single night of racing. I’m still excited about that.

Yeah, I think everyone is excited for you too. It’s a feel-good win.
Yeah, I’m still shocked. Of course there were people who didn’t want me to win, so I’m pumped off that too.

Who wouldn’t want Stank Dog to win?
Oh man, there are some haters out there, you know how it is. A couple runs, coming back down, I glanced at the crowd and this one guy was shooting me double birds.

Oh, people like that don’t count.
Well, I don’t think Villopoto wanted me to win either, but that’s just a racer’s mentality.