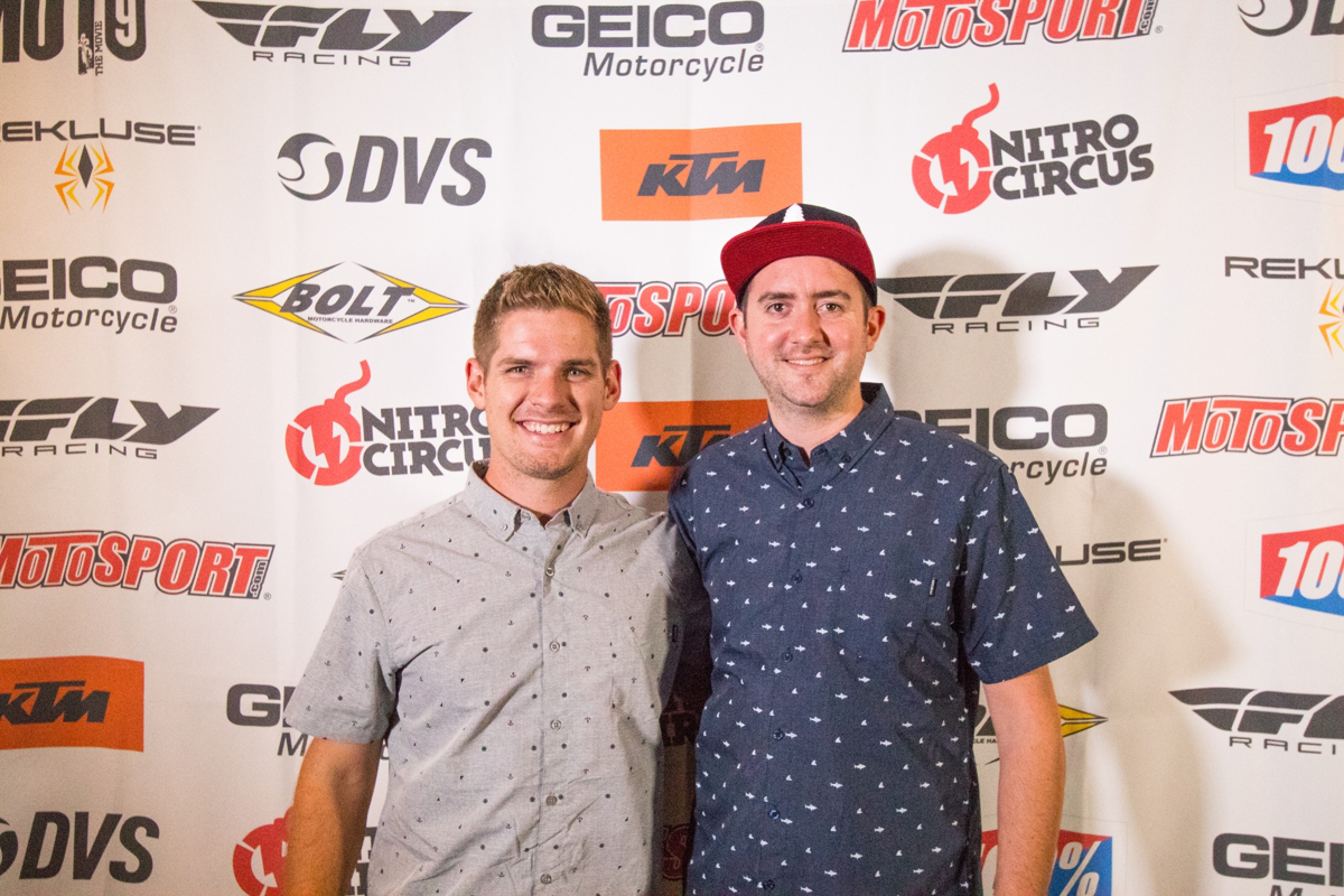 Dominick Russo (main image, left) was the director, director of photography, and editor on the Moto 9 movie. He comes from a background in riding and racing hare scrambles and is a die-hard fan of all things moto. He’s so die hard that he even streamed last weekend’s Red Bull Straight Rhythm while putting the hammer down in a motorhome, as the Moto 9 crew is currently on tour throughout the country promoting the film with premieres.

Russo has a background in business and photography and has an interesting story on how he became involved with the Moto the Movie series. He started out as an amateur photographer, on the road for 30 days shooting Moto 6; he came back to do the same on Moto 7. After graduating he was given a full-time job as photographer and graphic designer for the Moto the Movie series, but he really wanted move into filming. Taylor Congdon, the producer and originator of the series, gave him a shot as the second shooter and editor on Moto 8 (he had to learn editing as he went). After proving himself on Moto 8, he was given full reigns on Moto 9.

“It all kind of happened so fast, but super happy with how everything turned out and how much I do enjoy what I do now,” said Russo.

Racer X: Hey, Dominick, you guys are currently on the road promoting the Moto 9 movie. How long is that going on for?
Dominick Russo: Yeah. I think November 14 is our last one.

You guys are doing the road life for a month. Who’s on the road with you?
It’s myself, Jason and one of our buddies Christian. We brought him [Christian] along to kind of run a merchandise table and just manage that side of things so we don’t have to worry about it when we’re setting up and greeting everybody as they come in and stuff.

So that you can of focus on the premier itself and not the other little stuff?
Yeah, exactly. We’re not a big feature film where we bring our movie in and hand it to them personally, but there’s so many different formats [in the theaters]. We prefer to play off the digital file but it can go south sometimes. If their system is too old and they can’t read our file, then we have to figure out a way to get a Blu-Ray playing. Just kind of problem-solve it from there. I don’t know if it’s just too new of a product, but it did not work. You get to be a little frustrated sometimes. Then it plays and people love the movie and it makes it all worth it.

How has the tour been going so far?
It’s been pretty rad. People at every stop throughout the movie are saying that it’s their favorite one. That’s a pretty good feeling to have. We put so much work into this thing. The last two months of editing have been like 80 hours a week just pretty much living in the office. As frustrating as those days can be, to have the response that we are getting right now, it makes it so worth it. The last thing I wanted to do was start on another movie by the time it was going to be done with this one, and now I can’t wait to film and to keep trying to throw it together like this for next year.

Would you say the tour is re-sparking the fire under you guys after getting a little lugged down in the editing room?
Absolutely. It can be such a grind and last thing you want to do is pick up a camera. But I can’t wait. It helps, too, that we watched Monster Cup and the Straight Rhythm, so it got me a little bit more excited about dirt bikes again. Not that I was burnt out on it by any means, but it’s nice to get a little spark back.

What has been the feedback and the response that you guys have been getting from people?
The biggest thing for me … the coolest comment that I get is when people walk out of there, if they say it to me or among themselves, is that they want to go ride. That’s the coolest thing. Even at the first premier I had, I had industry dudes come up and tell me that they wanted to ride. We had Cooper Abbott there and they came out after a movie and he was like, I was really thinking of taking tomorrow off, I’m a little tired, but I just can’t wait to go ride now. He’s not in the movie. So, for him to say that, that’s a pretty rad thing to hear. I think that’s kind of my favorite feedback that we get.

What is your personal favorite part of the movie?
Mine personally, I do really like that we got to do some supercross because that doesn’t get to get shown very much. It never worked out with our scheduling to be able to do supercross. So, to be able to do that this year, I was stoked on that. But can I give you two? Kernside is badass. I love that segment. It’s short. It’s just fully action-packed. I think you have to watch it a couple times to really see everything that’s going on. I hadn’t really heard of any of the other guys, and to watch them throw down like they did was so rad. I had heard of Hillsack, just from Instagram, but I had never heard of Dereck Beckering. That guy, when we showed up, he had a weird tire that looked like he had done like fifth gear burnouts for ten minutes. It was like totally bald. I wasn’t sure what to think. Then he just threw it upside-down the first time and I was like, all right, we’ve got something here. This is cool. That was a cool segment. Those guys are just awesome.

But my personal [favorite], I think if I had to pick one, it would be the last segment, Kamloops. Especially because we teamed up with Anthony Vitale, who’s a Canadian filmmaker. He was the one in charge of Kris Foster’s X Games Real Moto [shoot]. We got to play a huge part in that, because we basically just helped each other out. We got his footage, he got our footage and we made a whole other segment basically. We shared some of the same footage, but I think what we got to do with the footage that was already seen in Real Moto, we got to actually use some highlights that you didn’t really get to catch in a 90-second edit. So that’s cool to be able to expand off of what was already obviously a really successful piece, because he won gold. That was pretty special to be able to play such a big role in him getting gold, and him being one of our friends now. Spent a lot of time with him. He’s just a great dude and he deserved every bit of it. I would say that was probably my favorite just aside from the riding, just the personal aspect. It was just special.

What were some of the difficulties you guys had to overcome in the filmmaking process?
I would say scheduling is one of them, just because the riders have such busy schedules and we don’t want to overstep boundaries as far as asking them to hit sections a certain amount of times, or go outside of their usual training regimen. So that can be tough sometimes to get everything we need in the allotted amount of time. But we’re grateful for any time we get with them. After the tour, after we did a 30-day tour to finish up the movie with Loretta’s and then North Carolina for Ginny and AP, then we ended it at Baggett’s house in the middle of summer. Once we were done, our air conditioner took a dive in the motorhome. So, Jason and I decided we were just going to drive through the night. That way we didn’t die of heat exhaustion. At about 3 a.m. in Atlanta, the fuel pump in our motorhome decided it didn’t want to live anymore. So we were stuck in literally the ghetto of Atlanta all night. Then we got back going two days later after the mechanics fixed it. Thirty miles into that trip home we had a blowout. We were pulling a trailer. We’ve got a pretty decent-sized motorhome, so you can’t just put it up on a jack and change it ourselves. So we had to wait like four hours to get changed. Then we had to be back for a wedding in two days. So we drove literally 45 hours non-stop, just switching off taking naps every couple hours so we didn’t fall asleep at the wheel. Got home and woke up the next day and started editing. It was kind of gnarly, to be honest. We were already pushing it on time. We had like a month and a half or so to edit by that time, but it’s just such raw content, so that was fun.

How’s the tour going so far? How many more stops left?
I think we have like 13 or 14 left. These next few days it’s just going to be a grind. We have our premier in Jacksonville, Florida, tomorrow and then Atlanta the next day. North Carolina the next day. Then we have one day off to make our way up to Boston. So it’s nonstop, but it’s all good.

One more left in the series. Will you be directing that one too?
Yes, definitely will. We’ve got one more left. We’re going to do Moto 10. They keep getting more and more popular, so you kind of feel bad to end the series, but I don’t want to drag it out too long. When the number gets too high, I feel like it almost loses its value a little bit. But there’s always going to be a need for dirt bike movies, especially right now where there’s really not a whole lot of them out there being made. So once the Moto movie ends, we’ll just hop immediately back into making a new series, and maybe even some other films. I’d like to make another Moto the Movie style series. There’s some subsets there as far as stories are concerned. But at the end of the day, most of the movies have always kind of been like moto porn. You just sit there and watch a bunch of crazy stuff coming at you. So, I would like to do that, but I would also kind of like to experiment around with maybe a more documentary-style movie or something along those lines. I’m going to keep making dirt bike movies because it’s awesome.

Be sure to check out their website www.motothemovie.com for more info for tour dates throughout the country and if you can’t make it to one, you can purchase the film here.