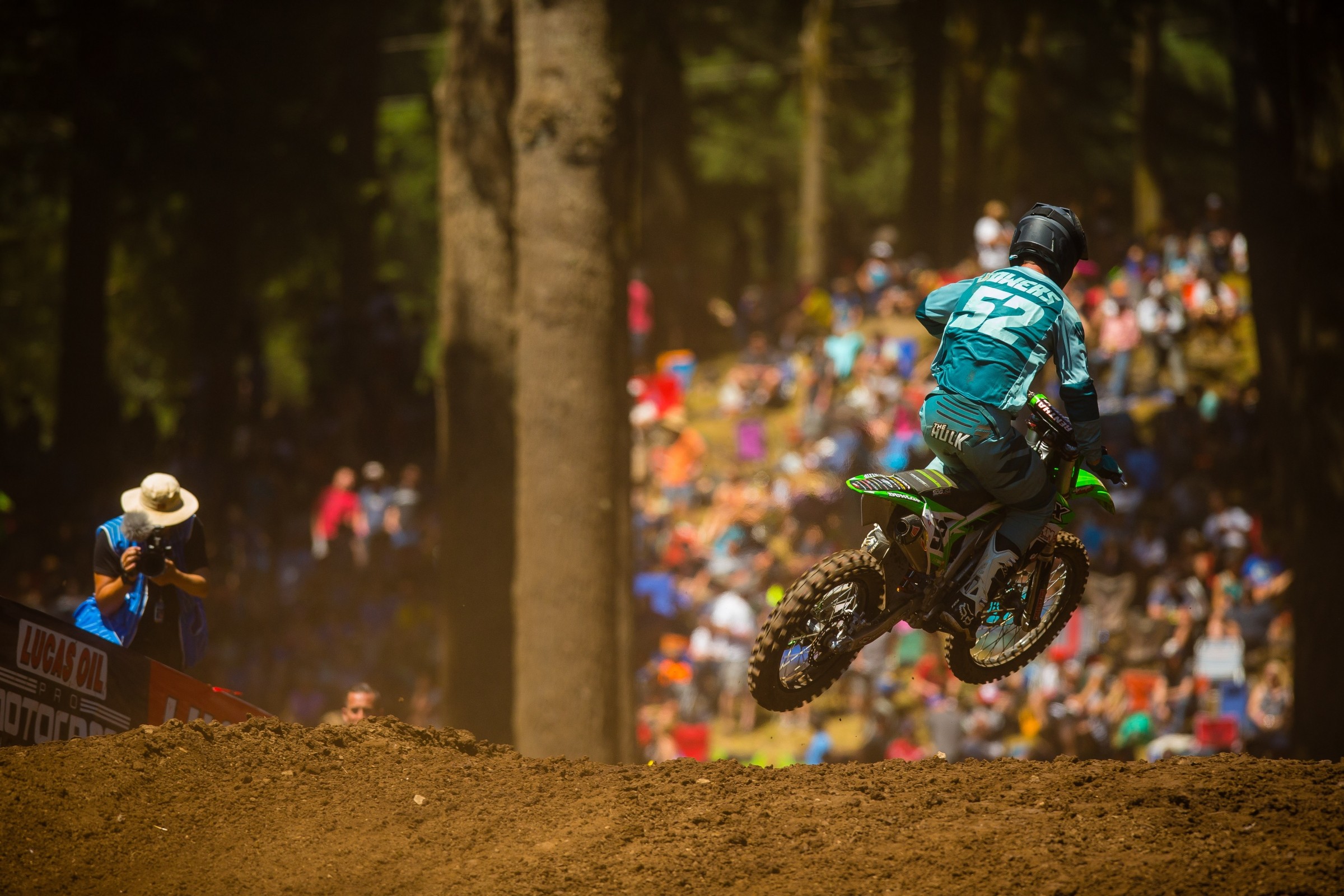 In 2015 Tyler Bowers was on top of his game, battling with Cooper Webb for the 250SX West Region Championship before a back injury prematurely ended his season. He was fifth in 250SX points the following year, but an early-season femur break derailed his 2017 efforts. With 2018 fast approaching, Bowers, who recently celebrated the birth of his first child, is back at work with the hopes of landing a ride so he can once again show the supercross world what he believes he’s capable of.

Racer X: It’s been a while since we’ve talked to you, Tyler, what’s been going on?
Tyler Bowers: Well, I have a child now. She’s seven weeks old this past Sunday and I’m just trying to figure out how to be a dad! It’s pretty abrupt, it comes at you fast. They get here and it’s the most exciting thing in the world, but it’s also probably the hardest thing I’ve ever done. I think they’re probably all different. She has her days where she’s amazing and other days where she doesn’t want to cooperate, so I’m trying to figure that out while putting together a privateer effort for the Monster Energy Cup and Red Bull Straight Rhythm. Kawasaki has given me a little bit of support, along with Showa and Pro Circuit, the usual guys. I’m my own practice and race mechanic at this point and I’m building race bikes, blowing up engines, swapping them out, doing all that. Between trying to figure out how to be a parent and a full privateer, I’ve been pretty busy.

Yeah, well, you’re doing two of the hardest things in existence.
That’s what I’ve heard. It’s definitely full time. The benefit though, what I’m getting out of it now, is I’m making the most out of my days. Certain days my wife, Bradi, has to go to work and I’m at home with Maxwell, our daughter. So I make the most out of that day too. I’m home with her all day. I’m in full-on dad mode and I just love her to death. I get good recovery and rest those days, and then on the days when I do get to go to the track I make sure I get the most out of it. I really focus on my motos and make sure I don’t waste any time. I guess I was before, but you don’t really see that until you don’t have enough of it. I’m just getting the most out of my days whether it’s at home or at the track. It’s been great. A bit stressful, but great.

Yeah, it’s crazy how little time you think you have before kids, then you have one and you realize how much time you actually had.
Yeah! I was talking about this with my buddy Greg and I was like, “You know, I thought I was busy before, but now it’s like, holy shit!” It’s two totally opposite ends of the spectrum. But there’s nothing better than getting that little bit of a smile out of her. Even at 3 a.m. when she’s crying or needs to be fed or whatever, you wake up thinking, “Oh my god, this girl doesn’t sleep!” Then you get her, and even if she’s not in a good mood, you see her face and it’s like, “Okay, I’ll do anything for you.” It’s the best thing ever.

You mentioned the Monster Energy Cup and Red Bull Straight Rhythm. Do you have anything lined up for January?
I’m working on some things, but nobody’s really making any moves. I’d like to do another 250 effort because I’m know I’m championship capable. I don’t think my time is done in the class yet, although I am open to moving up to a 450 should that opportunity arise. But if I was to leave and go back to arenacross, or move up to a 450, I just feel I’d be leaving a lot on the table. I’m definitely capable of getting wins on a 250 and I believe I can win a championship too. In 2015 with Pro Circuit, which was my first healthy year, I was crushing it. Cooper Webb and I went at it. So given another opportunity with a good team, and being healthy, which I am now, I’m more than capable of winning a title. So right now I just need to make sure I stay on the bike and stay racing, and we’ll see what supercross in 2018 brings me. I don’t really know what’s going on, I don’t know why people seem to think I’m such a bad buy, but I know I’m plenty capable of doing well on a 250 and a 450. I just have to stay healthy and keep riding.

Well, like you said, you’ve had some injuries the last few years and people sometimes tend to forget.
Yeah, I think a lot of people just forgot I even exist. I was an arenacross guy for so long, and I really only had one year where I was racing supercross every weekend. And when you’re working through injuries you’re not really in people’s eyes anymore. So I just have to keep racing and remind people I’m here. But at the same time, you can talk about injuries, and there are guys right now, with rides, who have had way more injuries than I have. And those guys haven’t even won races. I’ve won and consistently finished on the podium. Just because you’re a guy who’s capable of getting a holeshot doesn’t mean you’re a guy who’s capable of winning a championship. I think I have a lot more to offer than a lot of guys, but all I can do is just do the best I can.

Didn’t you win a couple heats this last year?
No, not on the Yamaha. I struggled quite a bit. I broke my femur at round three and came back the last two rounds, which was kind of pushing it. In 2016, with Pro Circuit, I won four heats, and that was considered a bad year. Everyone said I did horrible. I had four heat race wins and was fifth in points in 250SX East [Region], but it was supposedly a bad year.

Things go back and forth pretty rapidly in this sport, don’t they?
Yeah, you know, but it just takes one good race. I could go to the Monster Cup this weekend and do well, and all of a sudden I’m a superhero.

Talking about racing and life as a dad again, it seems like it can slow some guys down, but it seems to make other guys faster. What kind of effect has it been having on you?
Well, it’s definitely hard. I was talking about this with Mitch Payton the other day. It lights a fire under some guys’ asses, and that’s what it’s doing to me right now. I’m already feeling a fire under my ass because I need a job and I love racing. And now I’ve got a mouth to feed, and someone I feel like I’m letting down if I don’t do well. It’s definitely given me more motivation, although I always had a lot of motivation before. I’ve always worked pretty hard. I might have even overworked a lot of times. Now, if anything, I think I’m just a little smarter about everything. When I’m at the track, I make sure I put in all my work. You can’t cut anything short because the next day I’m spending the whole day with my child. But on the flipside, and this is something I was talking about with Zach Osborne when I asked him about what I should expect, he said, for him, the days where you have to be at home actually help a lot. You can’t go for a bike ride or a jog because you have to be home. You work harder on the days you can, and you rest harder on the days you have to be at home. You’re not out wearing yourself down even more. That part is a benefit, and I’m definitely feeling that so far.