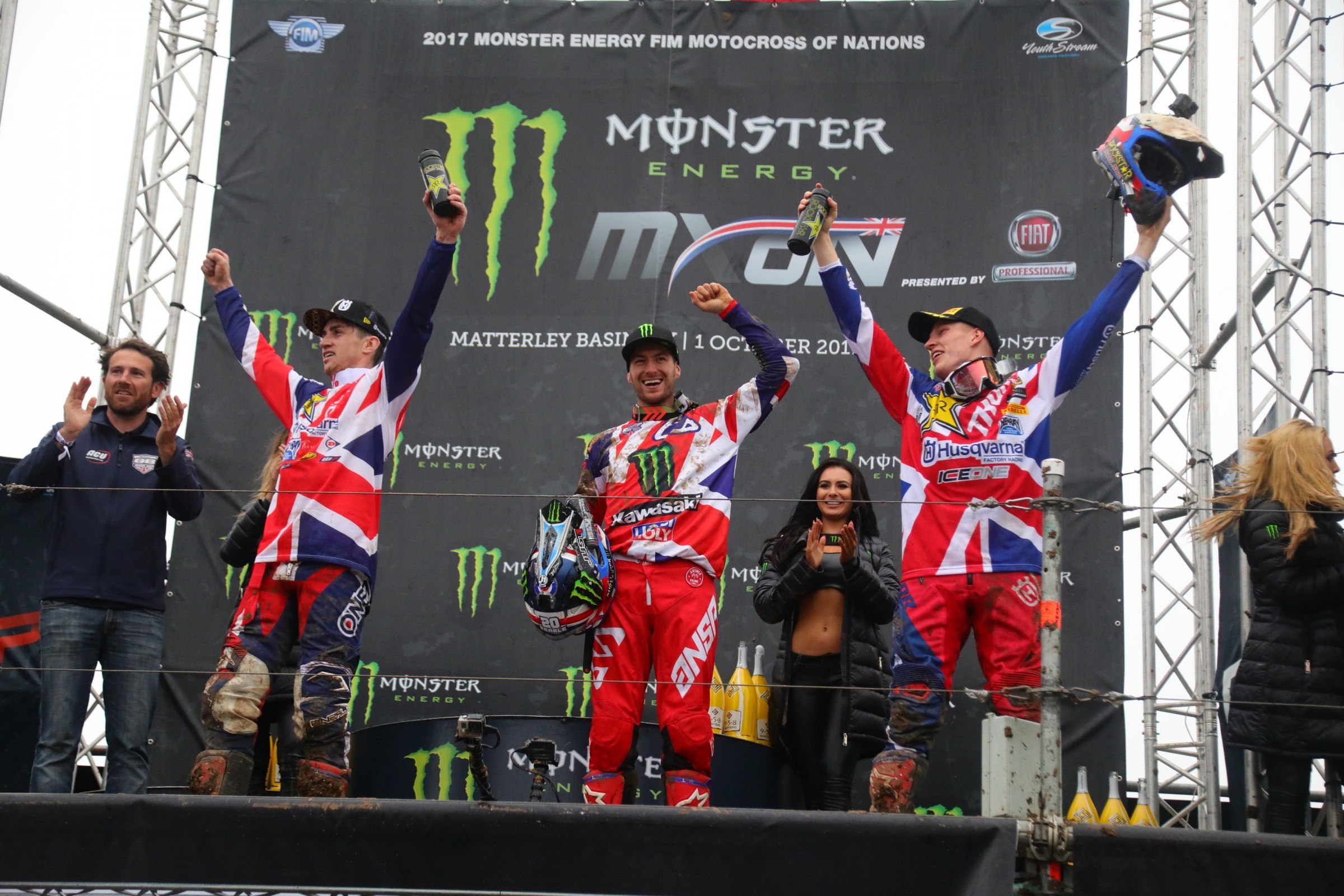 Insight At Last, The Brits!

As debutant team manager Mark Chamberlain hinted, home advantage can be both a springboard and a lead weight but the blend of fierce native support in numbers—in spite of a typical climate—and Rockstar Energy IceOne Husqvarna Max Anstie’s ability to block out the clamour for one of the most impressive and surprising 1-1s in modern Motocross of Nations history was a vivid palette for the Brits to finally create a celebration and join the throngs of French and Dutch near the podium.

Despite all the expectation and hype of finally breaking a podium-starved trail that stretched back to Belgium in 1997, there was the now-standard feeling of resignation when Tommy Searle’s KX250F threw its clutch early into the first moto. From Max Anstie’s horrible accident in Ernee, France, in 2015, to Shaun Simpson’s broken chain the previous year and a series of other close calls it seemed the black cloud that hung over Matterley was definitely British in more ways than one.

Anstie was supreme however to win under heavy pressure from Jeffrey Herlings; Searle was experienced and collected enough to make sure of a 15th place at the second attempt; and Dean Wilson deflected heavy attention from Switzerland’s Arnaud Tonus up to the last corner of the final moto to finally make it happen. Scenes around the podium were similar to 2015 where the French satisfied their home fans.

“Tommy had a clutch problem [in the first moto, leading to a DNF] and it was a scary moment because you then thought ‘We cannot make a mistake and it rests on every race.’ It put us under a bit of pressure but the boys took it really well and we didn't panic. You have a bit of an advantage in some ways with the crowd but then [pressure] in other ways and one of the things I tried to do with these guys was to make it as easy as possible so they could focus on their job. I’ve had a lot of people helping me so I have to thank them a lot. Going into the last race I told the boys that we needed to watch Holland and Australia. Realistically if we want to be on the box then nobody else mattered at that time. France were already gone unless they had a total disaster but that wasn't going to happen because they were a class act today as they always are. So we focused on those two teams and Australia had problems early so it was just down to Holland. The boys tried everything; the points were yo-yoing and they did everything they could. I’m so proud of them and Max was world class today, 1-1 is an awesome feat.”

“It is incredible. I feel that in the last part of the season—together with my Rockstar Energy IceOne Factory Husqvarna team—we were getting stronger and stronger because we are pushing and pushing. I knew from the last few GPs when I got on the box that I would be good for Matterley and it was awesome. The first race was something special because I managed to get a bit of a gap and the crowd were so loud it was hard for me to think and I kept going and going and did my work. In the second race I got out of the gate and then crashed! The previous turn I could hear the commentator and he was saying something like “All eyes are on Anstie if Team GB get a podium!” And then I slid out and thought ‘oh no!’ But I picked up and tried to race as hard as I could. The rest of the guys did amazingly and I have to give it up to Mark, this week has been stressful but we made the best of it and we kept solid.

“Last year in Maggiora when I rode the 250 I was thinking more about 2015 and obviously I got landed on and broke my back and neck and it could have been a lot worse. Coming here this weekend I was looking at it like it was MXGP number 20; I wanted to race as hard as I could. I don't think the win has sunk in yet. The crowd were unreal and all the family are here. I was in this zone where I was hitting my marks and feeling like I was down the road riding my local track. I felt like that all day and just kept that focus. The emotion? I don't know yet but I guess it will sink in tonight and tomorrow. Seeing all the fans like that was unbelievable and I think it is a once in a lifetime thing, we might not get the Nations back in England for another 10 years. It is a weird feeling.”

“To be on the podium is amazing and my teammates did such a good job today. In the first moto with Max winning and Tommy DNF-ing I didn't know what to think! I just thought about doing the best I could do. Unfortunately I had some goggle issues and by the second corner of the second lap goggles were gone! The track threw a few punches at me. Gotta give it up to Max. It is just a huge thing in his career … I wish I did that! It is just amazing. Anyway, first podium in 20 years and that is also amazing. We gotta give a big thank you to Mark. He has been amazing for us all. It has been a good year for me.”

“Mixed day for me. Obviously in the first race I had a DNF when I was riding really well and just a couple of laps in it was gone. I was really disappointed but then knew what I had to do with Max winning; I knew I needed one solid result and to bring the bike home in that second race. I couldn't afford to make a mistake and burn the clutch up or have another engine problem—I just needed solid points. I made my way steady through the pack and was nervous about throwing it away. I managed to get a 15th which is nothing special but in the circumstances it was what we needed. The track was difficult but more because of vision. If it had been a sunny day then I think everyone would have said it was a nice track, technical and fun. Most riders had the same problem and quite a few lost their goggles early on. It is a massive box tick to be honest. I think this is my ninth or 10th time on the team and there have been events where I have won my class or been in the top three in the motos and although today wasn't one of those days we got on the podium.”