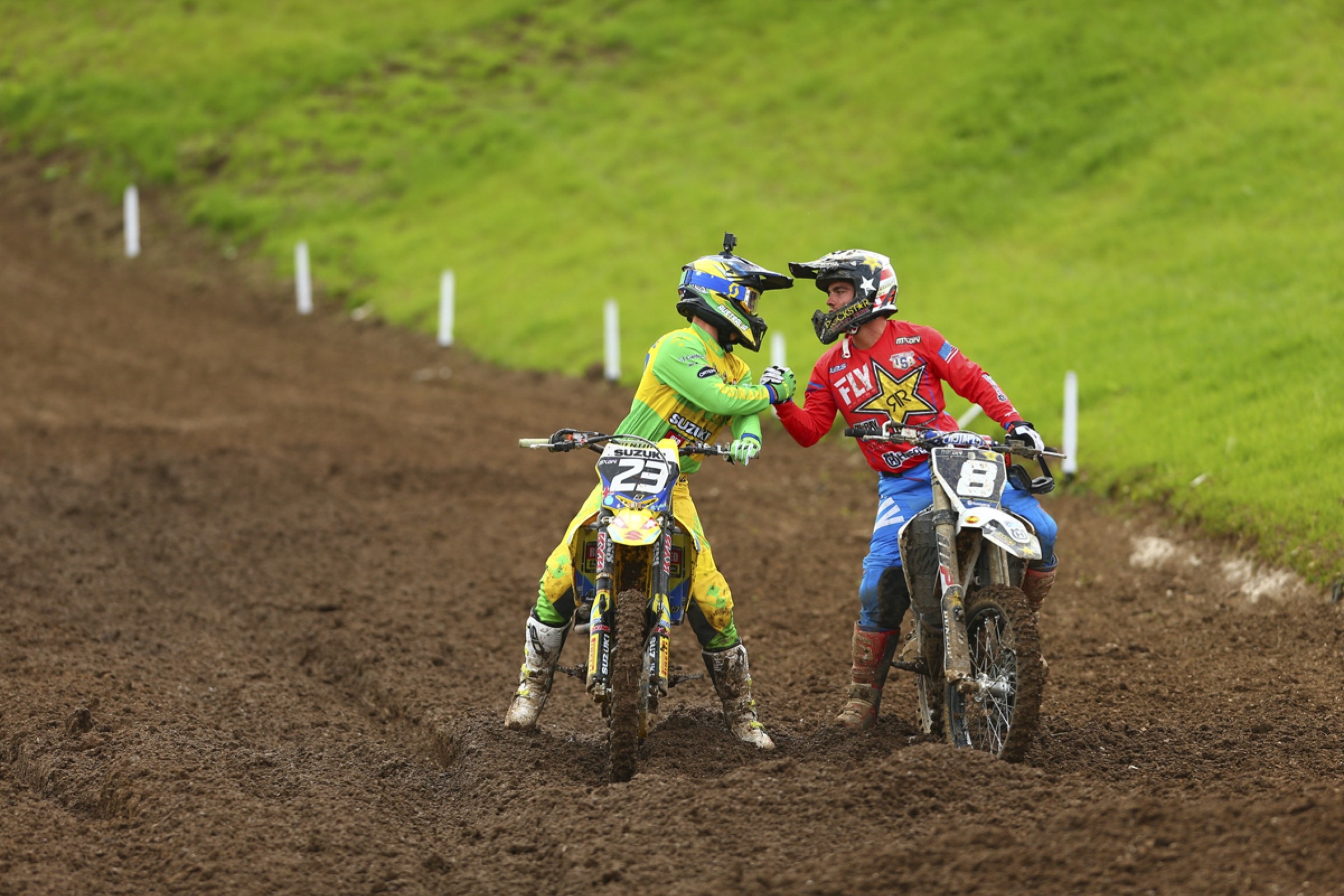 The seventy-first edition of the annual Motocross of Nations is underway here at Matterley Basin, England, under cloudy skies and on and off rain. The track is in and out of a valley with some big and safe jumps and great traction. It’s a tad wet and ruts are developing, but all in all it’s a good racetrack. Think High Point but faster.

Team USA was dealt a bit of a setback for their starting spots today in qualifying with the 37th gate pick, but rivals Great Britain were 24th, Italy was 32nd, and Belgium was 34th. France was fortunate with the third gate pick.

The weather improved a bit for the qualifying races and they were mostly held under dry conditions. The poor gate pick for USA didn’t hinder the country too much as they had a good day in taking a fourth overall for tomorrow’s big race.

The standout on the day for the red, white and blue was Osborne who predictably didn’t get a great start but then got to work while Australia’s Hunter Lawrence opened up a big lead. Osborne slowly but surely caught everyone in front of him to pass Lawrence on the last lap and take the win. He was at one point around 15 seconds back of the young Aussie. It was an amazing ride for the American 250MX champion and established that he was the right choice for Team USA captain.

Covington jumped out to an impressive start all things considered and put himself right into the mix for a chance at a podium as he passed Great Britain’s Dean Wilson. Then around halfway he slowed a bit which allowed Wilson and Belgium’s Kevin Strijbos by and he ended up seventh. Pretty good debut in the 450 professional ranks however. To no one’s surprise, Jeffery Herlings captured the moto win with a dominating performance.

Seely had the toughest day out of the group with a ninth in MXGP; he moved up a bit but for the most part stayed where he started. The encouraging thing for Cole is that he set his personal best lap late in the moto. He was getting better but then stalled it for a turn right after his fast lap. The Honda team is making some suspension adjustments for tomorrow to help the bike be a bit more loose and follow the bumps. Out front it was Slovenian Tim Gajser who brought it home about five seconds ahead of France’s Gauthier Paulin and Italy’s Antonio Cairoli.

Team USA’s plan is give Osborne the two inside gate picks because they figure that he’s the best chance they have for a win—either overall or in a class. With the way the classes are scored, having a great finish from an MX2 bike is a big help and Team USA is going to try to do just that.

Incredibly Max Anstie of Great Britain was ok after a lapper moved over on him over a big tabletop and caused a hard crash. Anstie had caught fire (not literally) and was moving up when the incident happened. He finished fourth and will be fine for tomorrow.

Germany’s Max Nagl had a tough MXoN last year with a bad crash and now this year he broke his wrist today in qualifying, which will take him out of action for the event and leave Germany with just the two riders.

Estonia’s Tanel Leok is in his 17th MXoN for Estonia, which is amazing. And being the bad ass that he is, he grabbed a ninth in Open.

Two-time vice MX2 World Champion Jeremy Seewer showed that his speed on the big bike is also pretty good with a nice ride to take third in Open. He was never really challenged the entire moto and opened some eyes on his RMZ450.

Speaking of Suzuki, Lawrence, the 17-year-old Aussie that came so close to winning the MX2 qualifier, is all signed up for 2018 and ’19. With Suzuki’s expected withdrawal from MXGP racing, word is that Lawrence will end up on Honda’s in MX2 with Garibaldi in 2018 and then GEICO Honda in the USA for 2019.

Lawrence’s teammate Kirk Gibbs was described to me by Australia coach Michael Byrne as someone that wasn’t flash but was in great shape and gathers speed by the end of the moto. Well, he was actually all of that and he had raw speed as well. He finished fourth in Open. His result along with Lawrence got the Aussie’s a top three finish after day one.

In the post-race press conference, Herlings asserted that his teammate Glenn Coldenhof had a bad day and would need to be better tomorrow. With Brian Bogers surprising with his third in MX2, the Dutch just need a couple of decent rides from “The Hof” to end up with the win.

Puerto Rico has an all American team for the first time and after surprising with that good practice time Darian Sanayei came from a ways back to an impressive sixth place in MX2 qualifier. It was a real good ride for the kid and teamed with Marshal Weltin, PR qualified 11th overall.