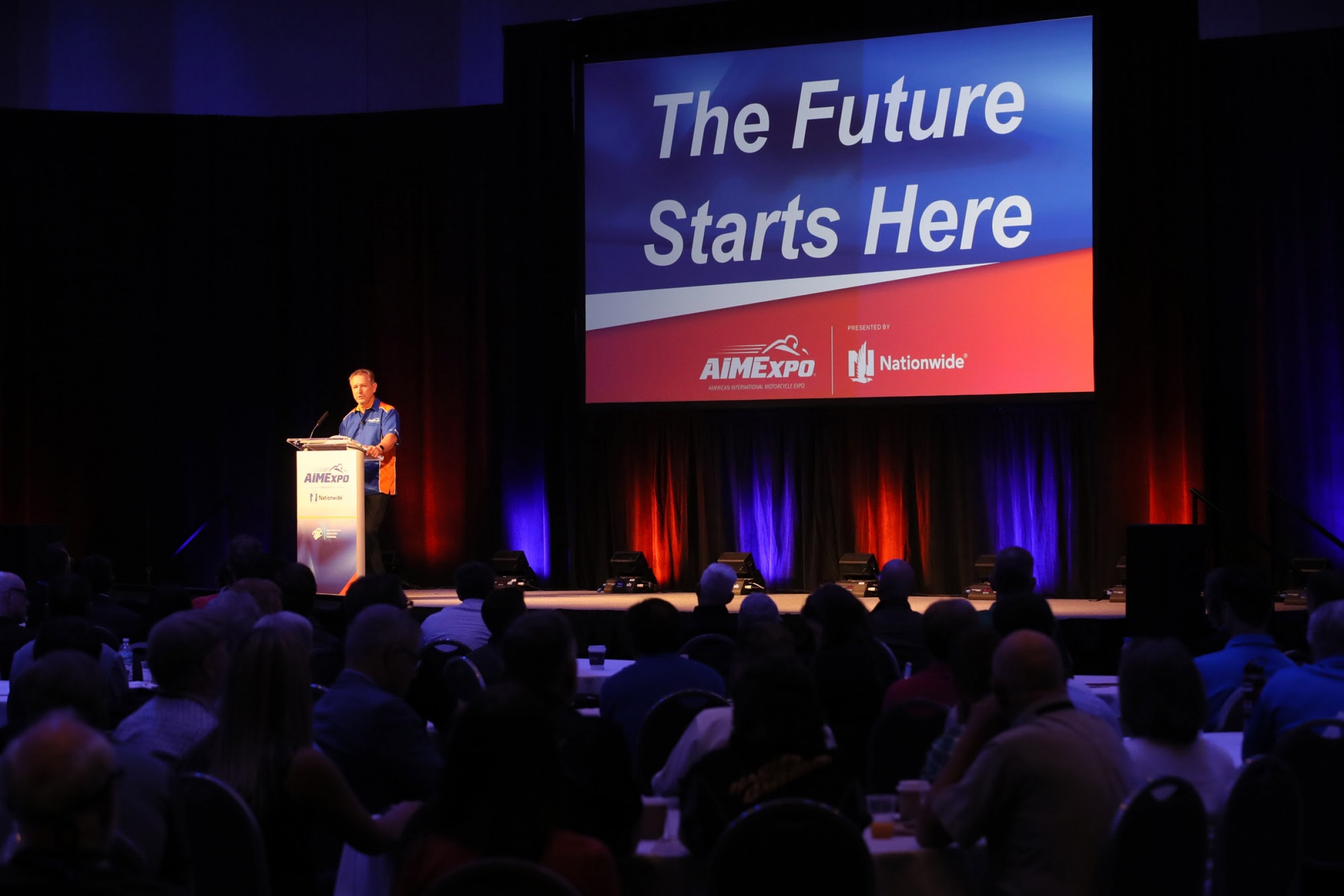 Why is there a big industry tradeshow in this sport? Why do we cover it so heavily? Because behind the scenes, the interplay of what products your local dealer (or favorite online retailer) carry is huge business. Dealers are the lifeblood of this industry—what they stock has a big influence on what you buy.

But, that’s only part of it. When a big tradeshow brings so many industry people under one roof—basically every company that’s trying to sell something—you can’t help but have interesting conversations with very important people. That’s when the real business gets done.

What’s on tap for our industry right now? Attempts to get new people to discover motorcycling. The AIMExpo kicked off by saying The Future Starts Here. What will they do? We talked to the AIMExpo’s Larry Little to find out.

Racer X: Let’s start with the basics of a tradeshow like the AIMExpo. Why is it so critical? Most consumers might not realize the interplay between the dealer, the consumer, and the part they want. Maybe they just want to buy a set of handlebars. But a retailer has to carry that set of handlebars for them to buy them. This is a critical juncture.
Larry Little: Yeah, basically there are 10,000 retailers in America, whether they are franchised to sell new motorcycles, or if they’re a just an accessories store or a service shop. It’s about half and half. They’re a critical part of being an enthusiast, because while you might be able to buy something from an online store like Amazon or Revzilla or something else, at some point, when you’re a motorcycle rider, you’re part of the community. I always say, when you decide to ride something that can’t even stand up on its own, you’re a unique case. We’re different! It’s a community, and I think what AIMExpo does is bring that whole community together in one place once a year. Everyone gets to discuss where their business is, how their business is doing, and where it’s going to go. Yeah, we’re here to see all the new 2018 products, but it’s also about having discussions about where we’re going to be in 2028.

When you roam the floor here, you can see it. If someone went to a tradeshow a few years ago compared to now, they would immediately notice the differences. For example, side-by-sides are everywhere on this floor now, much more so than just a few years ago. A quick walk around this floor will show you exactly what’s selling in the industry right now.
Absolutely, and side-by-sides and ATVs have become more important to the actual franchise dealer. Motorcycle sales have really peaked right now, and side-by-sides are helping keep the dealer afloat. They’re a more profitable vehicle in a lot of aspects, and they also introduce a lot of new people to the powersports market. One of the things were heard in opening ceremonies yesterday from Scott Wine, the CEO of Polaris, is that it looks like 18 percent of their buyer in the utility market, and side-by-sides, is new to this industry. We are seeing new entries in there, not just people trading up, so to speak.

Let’s get to the meat of this. There’s a critical situation brewing in this industry right now, and people like you and I, all of us, really, have probably already been thinking about it, but it’s all starting to come into the spotlight now. We need to get new riders! We need it or we’re in big trouble!
Yeah. And that was the theme of yesterday’s opening ceremony, which was “The Future Starts Here.” We as an industry have to pull together and recognize that the baby boomers that carried this industry for so many years are aging out. The Millenials, they like motorcycles, but they like motorcycles for what it can do for them, the experience they can have. We have to relate to them. Even the demographic group after them, Generation Z, the first of them are just turning 20 years old, they’re just entering the market place, we have to approach them in a different way because they grew up with a screen in their hand. We have to approach the youngest—maybe the four, five, six year olds—to get them an experience on a motorcycle or an ATV, and we also need to get the Millenials to experience a motorcycle or an off-road vehicle as well. We have work to do, but there was a lot of energy after yesterday’s opening ceremony, with the CEO of Harley-Davidson talking. It was interesting because he said we have to stop talking about hardware. It’s the ride itself first, then the rider, then the actual hardware. We have to talk about what it’s like to ride, first.

Right, because before, you were just trying to get someone who already had a motorcycle to understand why they would want a better motorcycle. Now we’re trying to just get people to try one for the first time!
Right. And the Motorcycle Industry Council is working with Feld Motor Sports to create the RIDE program to expose new people to a riding experience. They’re going to be partnering up at Monster Jam events, and in the actual pit party, the whole family can get a chance to throw their leg over two wheels or four wheels. The kids, and maybe even mom and dad, will be able to do this. Anyone who ever got on a motorcycle for the first time, the first corner you ever went around, it was like sensory overload, and then you felt like for the rest of your life you wanted to feel that emotion again. We have to get new people to experience that.

What’s interesting is that you mentioned Feld, and when people hear that they immediately think of supercross. But they’re doing this at Monster Jam. I’ve heard that’s because at a supercross, a lot of that audience already had a bike. At Monster Jam you can potentially attract a lot of newcomers.
Right, and the Monster Jam audience is very good in terms of demographics. You have Generation Z, you even have some of those Millennials who are having kids now, and those families are coming to those events. It’s a way to reach out to them in an environment where it’s really easy to get that first experience.

From a Racer X perspective, normally when we hear things about Harley-Davidson or Polaris, which owns Indian Motorcycle now, we don’t pay much attention because we don’t cover the street market. But even they have noticed. Harley doesn’t make bikes for four year olds, but they recognize they need kids to ride a dirt bike at age four, because decades from now, that person is a life-long motorcyclist who will want to buy a Harley.
Right, and Matt Levatich, the CEO of Harley-Davidson, stated that yesterday. He said we need to come together as an industry and get them to come in. It’s a big enough industry to where after they’re in, we can try to sell them our piece of the pie. I don’t think you would have heard that out of Harley-Davidson five years ago. I think that signaled a new recognition that to grow our business we have to cumulatively grow the pot. Once we grow the pot, we can fight for market share.

This is what’s cool. Yes, this is a show where dealers decide which products to show in their shop. But there’s this whole other element where you get these important power people and deep thinkers in this industry together in one building for four days, and they have these conversations that can solve a lot of problems.
Yeah and that’s what a trade show is all about. You’re walking around and you bump into someone you know and you have a conversation. Everyone says, “Yeah, I can see all the new products online.” Yeah, but you can’t have that kind of interaction online. That will always be the value of creating a place to gather. It might not be a show of this proportion, it might be a conference where you come together for some specific reason. But as you know, there’s a lot of those off-the-cuff things that happen just because you’re here, and not because you planned it, that are of value. And that’s definitely happening this weekend.