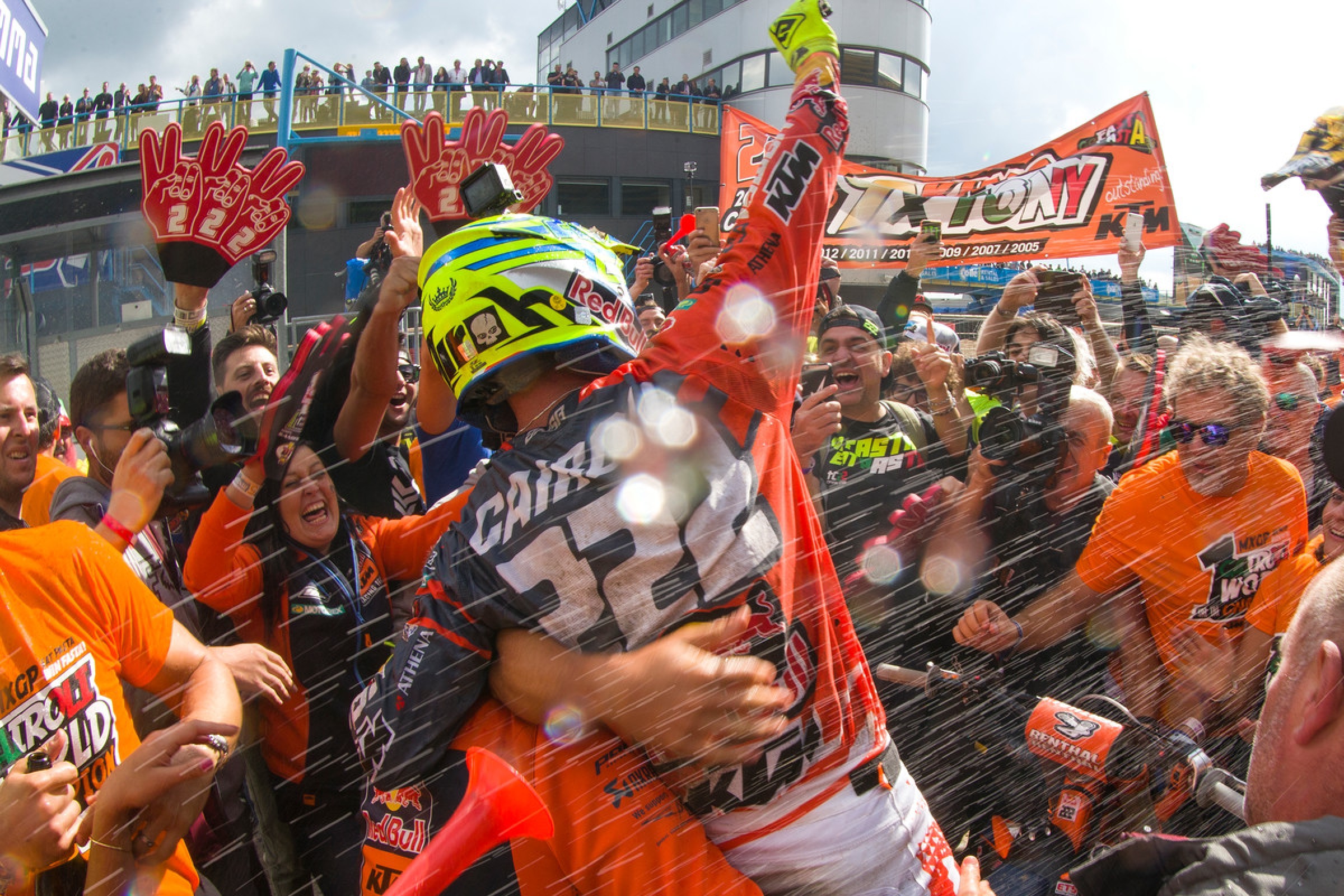 Red Bull KTM have won seven of the last eight Grands Prix and Antonio Cairoli has stood on the box in nine of the last 12 rounds. With his rapier blend of starts, experience, and race craft, Cairoli lifted his third FIM World Championship on Dutch soil and his ninth crown in 15 years—quite a rider and showing no signs of slowing at almost 32 years old.

A close second position to “Sand Master” and teammate Jeffrey Herlings in the first moto at Assen Sunday was enough for the party to start in the permanent circuit in northern Holland.

After the race, the mobbing, the gold lids, Answer celebratory shirts and fireworks, Cairoli took time to talk to the press. Here is what he had to say.

Racer X: On the achievement…
Antonio Cairoli: It was an important championship for me because we didn't start as the favourite, and for everybody who was talking [doubting and criticising] this is for them. I know what it takes to make a solid and consistent championship. We made it and I’m really happy about this. It was an amazing season, one of my best. It is amazing that I can still improve myself after almost 15 years in the World Championship. I’m proud of this and I think we can still work to be a bit better in some cases, but right now I want to enjoy this title.

On his Assen weekend, going 2-6 for fourth overall…
We had a good weekend. The first moto was good and the second could have been better, but on the third lap I pulled off all my tear-offs—it was a rookie mistake. I kept wiping my lens with my hand, but at one point it was totally scratched and I couldn't see the holes. I had to slow down … but I’m happy because the championship was the most important thing for me. There were a lot of fans here and the track was amazing after all the rain that fell. It was still very technical and the organiser made a good job. There were also a lot of Italian fans. I’m really happy.

On what felt different about this championship…
It is the first with the 450 KTM for me, which is very special. The rest were with the 350 and when I was injured we were never really in a position where we could test [the 450] a lot. This year I felt very good with the bike and we improved a lot in the winter.

On being motivated by the critics…
It depends on who was saying what. If it was from smart people then it motivates you because they can really see what is going on. Most [people] just talk s**t; those who don't know about motocross.

On Herlings pushing him…
For sure Jeffrey proved he is one of the fastest in the world, even on a single lap he is very, very fast. For some it is easier to follow [a quicker rider] and for others it is harder to make a step and fill the space. I think the evolution of motocross means that the bikes are getting easier to ride and a middle rider can be faster because the bike permits a lot of stuff; before you needed more technique rather than throttle. But with the progress of bikes and suspension it is easier to go faster for more people.

On facing the Herlings threat after pre-season promise from the Dutchman…
Before the season and in the winter time I think everybody is fast. Everybody is motivated 110 percent to do well. I looked to Jeffrey, but to the other world champions as well because they are also super-talented. You don't get a championship through being lucky. Both Romain [Febvre] and Tim [Gajser] were really good when they won. So you couldn't just watch Jeffrey. You had to be consistent and injury is always just around the corner at this level.

On a 10th…
I just spoke with Stefan [Everts] and he said: “Stop now!” We will always try for it. The goal is to get the 10th next year and then maybe the 11th the year after … but that's the goal of everybody I think!