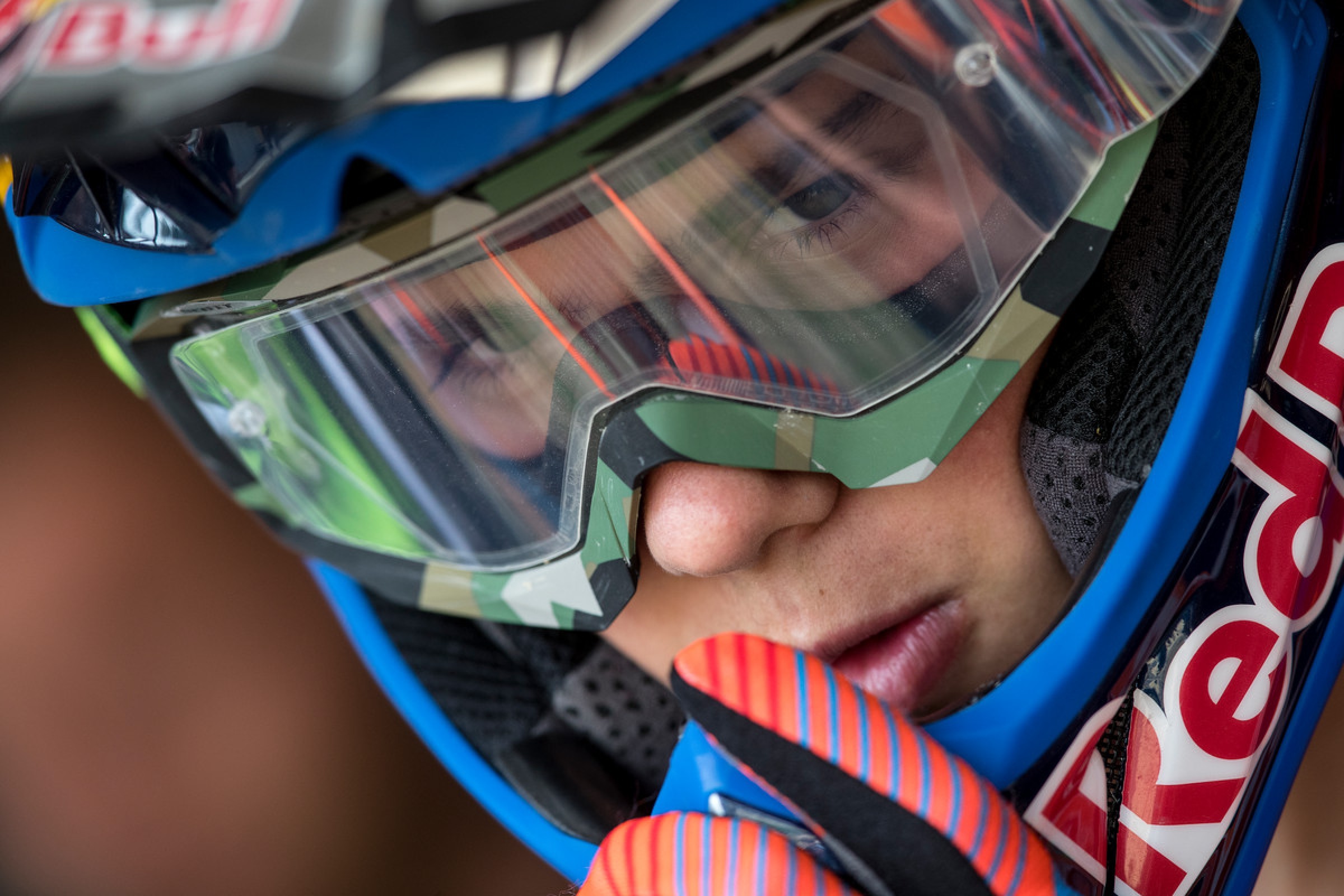 American fans might wonder what all the fuss is about, but watching Red Bull KTM’s Jorge Prado in full flight across the sand on the works KTM 250 SX-F it’s starkly obvious that the 16-year-old is going places swiftly.

The crib sheet on the Spaniard—resident in Belgium for almost half a decade—reads as thus: 2017 Grand Prix debutant, was second overall in his very first MX2 GP at Assen 12 months ago and returned to the Dutch round to win with a 2-1, a second full year on a 250 four-stroke, has so far combined the rigours of a pro racer with being a full-time student, won at only his sixth Grand Prix on the Italian hard-pack of Arco di Trento, has struggled with the length and demands of an entire MXGP calendar, wilted at the hot races in Italy (Ottobiano) and WW Motocross Park, is one of the most prolific starters in the FIM Motocross World Championship (only Antonio Cairoli has more holeshots), has long been on the radar for his talent, and is hitched to KTM on a multi-year deal.

Visitors to Florida for the USGP saw very little of Prado’s best, but back on the Dutch sand less than a week later the Belgian GP winner (at Lommel of all places) was again topping-up the hype. For all of Jorge’s exciting possibilities and undoubted talent (Cairoli rates him as the standout rider from the whole European scene) he still has to learn his race craft, his physical limitations, and even some of the politics of the sport. A few eyebrows were raised at Assen when he seemed to push teammate and world champion-elect Pauls Jonass so hard for the lead in the first moto—the Latvian was hoping to acquire just enough points to finish the MX2 series he has led since round five. In the second race Prado blitzed the field for his fourth chequered flag of 2017.

The teenager is thus on the brink of something special and will have some clear weak points to work on through the off-season. A stronger, wiser, and more experienced fast-starting Prado in 2018 is a worrying thought for the rest of the Grand Prix pack, even for the super-consistent and resilient Jonass. We sat down for a quick catch-up after his third Grand Prix win of the year—the highest haul for any rookie this century incidentally.

Racer X: The USGP seemed like another low point of a debut season but, somehow, you have turned it around again. It could be said that the last seven days sum up the year.
Jorge Prado: The USGP was not good for me, but I was feeling quite good that whole weekend. The only problem was the heat and my body could not resist the weather and the humidity. I knew I had the speed and could follow those guys … I just couldn't do it. Coming here to the sand and my first podium meant I had some extra confidence and motivation. I had a good week. I didn't train so much, just recovered, and that was the key. I took it easy and came here fresher.

Your dad mentioned that school has started again. Were you back in the classroom?
Yeah school has started, but we changed a few things and I’ll be studying more at home. It was difficult to combine racing the World Championship, the training, and all the time for being in school. I know that if I want to be there [on the podium] every weekend then I also need to find time to rest—that’s important. Going to the classroom or having to do a lot of homework is not really rest for me. I’m at the point in my career where I have to make a few decisions, but I think studies are really important and that’s why I continue to do it, although in a different way.

Everything has been new for you this year but coming back to Assen meant familiarity, and it is a scenario that you’ll benefit from in 2018?
Yes, coming to this race I was expecting to be one of the fastest guys because we saw in Lommel I would be one of the main riders in the sand. But actually, this morning in warm-up, I felt really bad. I struggled with technical things and I was a bit down. Coming to the first moto I calmed down and turned things around. With another good start I could be at the front and save a lot of energy for the second moto. I didn't even need to use all my energy in the second moto, so that was quite good. From last year I knew this track was difficult to pass. I knew also I would not holeshot this weekend because I chose the inside gates and my jumps were not the best. My shifting was perfect and everything went well, but the outside gates were harder. Pauls made a good rhythm so guys behind couldn't catch us. Conrad [Mewse] did the same start in the second moto, but I knew he would slow down after a few laps.

How did you turn things around?
I’m a rider who rides with a lot of feeling. And if I don't have that then I struggle. My father is always close to me and I know his face and I know his reactions but after warm-up he was not stressed or worried and I knew everything was okay. Claudio De Carli [KTM MXGP team manager] told me not to be nervous and that I’d have time to be nervous next year! “Keep relaxed, it is just another race,” I told myself. I wanted to win but I did not need to win. Every time I got on the bike I felt better so after the sighting lap I said to my dad, “It’s going to be a good one.” After the sighting lap for the second moto it was even better, the track felt perfect to me with so much flow. The qualification heat and even the first moto felt a bit muddy, but the second race was more about rough sand, which I like. So feelings. I’m a rider that like to ride good and have everything working well. If things aren’t going how I like then I stress a bit. I could turn it around today and that makes me happy because it isn’t always easy.

Not for the first time you and Pauls had some close moments. What was going through your mind knowing he could win the championship today? Did you have to be more careful knowing he was counting every point?
It looked like I had to be careful with him, but he didn't want to be so careful with me! I didn't know what was going on! He had the holeshot, I passed him, he passed me back and then after that I relaxed for the second moto. I was going pretty easy behind him and finding a good flow. I was changing lines and trying different things to see how much he could push. I am going to be honest and admit my tactic was to pass him on the last two laps, but I got held up by a lapper and had to push a lot to catch back up. I think I caught him by three seconds on the last lap and wasn't giving up until the last corner.

We know you are staying in Grand Prix for another year but when will American fans see you next? Has there been any more talk about supercross plans?
Now we are at the end of the season we have started talking again about my future and perhaps going back to the USA to do a couple of races or just to practice. In the end, we decided to stay in Europe this winter because I need to be focussed on the GPs and I think I have a chance to do well in 2018. We will change some things, and I think you guys will see the programme quite soon. I want to consistently be part of those post-race press conferences. That's my goal.

Lastly, I hear someone stole your mountain bike in the paddock this weekend.
Yeah, crazy!

Will the GP win bonus ease some of the pain?
I am really lucky to get those bikes from my sponsor Specialized. I’m sorry for them that I am down a bike! Every year they send me great product and the full cycling kit, which is a big help because I cycle a lot for training. On Saturday during the qualification race my bicycle was next to my van and my mother was inside the van: so I have no idea how they managed to steal the bike. I had only used it twice! These things happen. Yeah, I took the bonus and luckily I’m really happy with the win at the moment!