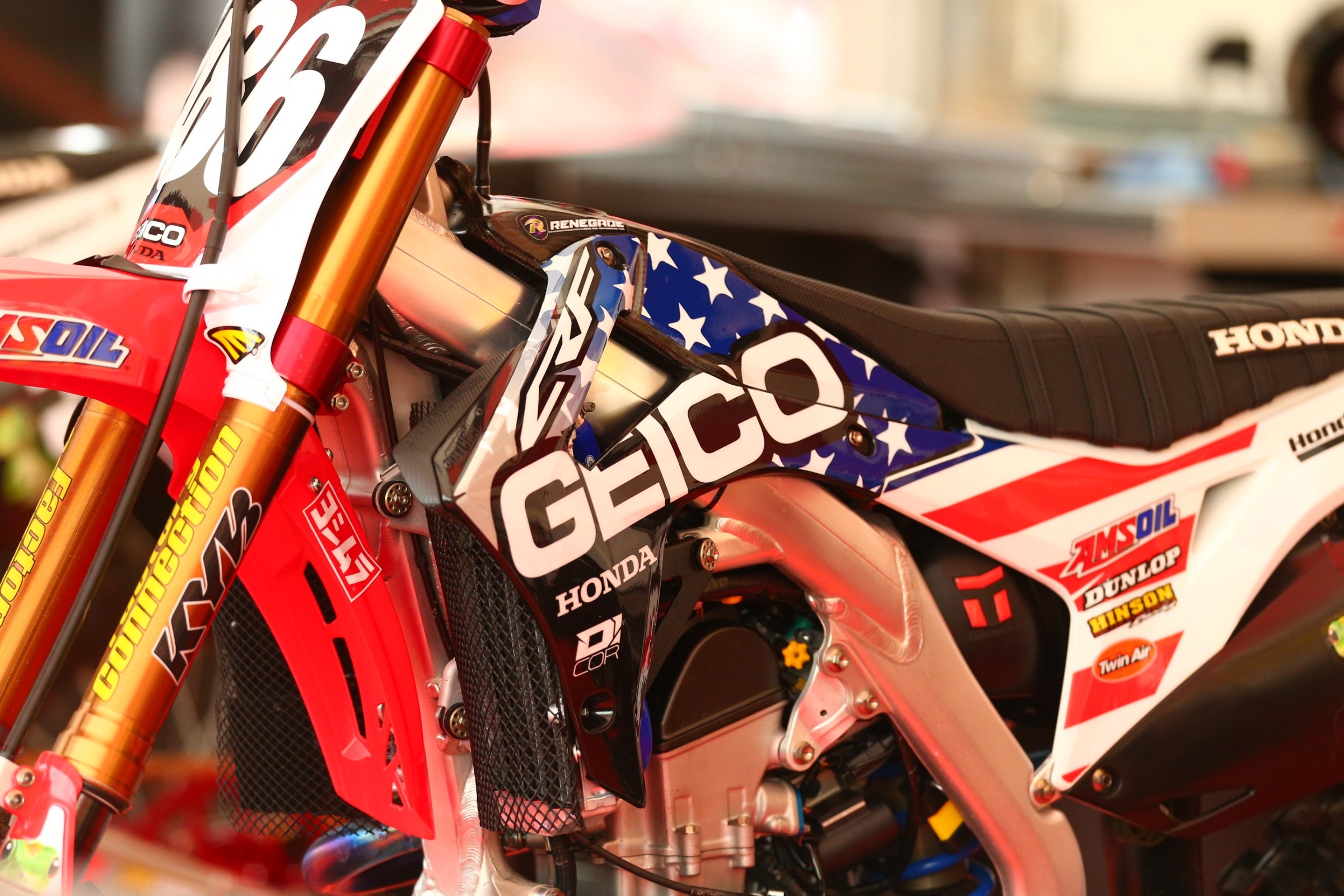 Welcome to the Racer X Race Day Feed, your one-stop shop for round 17 of the FIM Motocross World Championship from Jacksonville, Florida, at WW Motocross Park. We’ll be updating this post throughout the day with news, notes, and results from today's qualifying races, so be sure to check back throughout the day. You can also follow Racer X on Twitter, Instagram, and Facebook to stay up on all the action.

Due to rain yesterday afternoon and last night, the track at WW Motocross Park was pretty sloppy for this morning's free practice sessions. Florida's weather is pretty unpredictable, but you can usually expect a decent amount of rain this time of year. I think our own Jason Thomas—who's spent a lot of time in Florida—said it best earlier this week in our 3 on 3 column, "I am predicting a lot of heat, humidity, and probably a good afternoon shower or two. That's Florida weather this time of year and with Hurricane Harvey spinning bands of rain towards the east, it is almost a certainty that we will see rain at some point."

Because it was so wet and most riders were just getting a feel for the new track we didn't learn much from the free practice session . However, we did learn that Cooper Webb will miss the rest of the weekend due to an apparent wrist injury sustained in a crash late in the session. We'll provide more updates on Webb as more information becomes available.

In the timed practice sessions, which determine each rider's gate pick for the qualifying races, Thomas Covington shined in MX2. He logged the fastest time of the session with a 2:02.772 which was .613 seconds faster than the MX2 points leader Pauls Jonass.

Justin Cooper surprised many by putting in the fourth fastest time with a 2:04.567. The 2017 Nicky Hayden AMA Horizon Award winner was the top-ranked Lucas Oil Pro Motocross competitor in the session.

RJ Hampshire and Adam Cianciarulo both appeared to struggle as they finished 10th and 26th respectively. AC went down at the beginning of the timed session, but was able to return later and put in three laps. Here are the results from MX2's timed practice.

In MXGP, Jeffrey Herlings laid down a time that was .62 seconds faster than MXGP points leader Antonio Cairoli. Herlings used a quad in the back section of the track on the very last lap to get that time. So far he's the only one to do it.

Eli Tomac continued to struggle after a tough free practice session where he was searching for the right suspension setting. In timed practice he finished in 13th and was 3.3 seconds slower than Herlings. Tomac was the fastest American in the session with Justin Barcia, Benny Bloss, and Kyle Chisholm finishing in 17th, 20th, and 22nd respectively.

The qualifying races are set to kick off in less than an hour, so be sure to check back here for a full report from both races.

Kawasaki announced via their Twitter page that Adam Cianciarulo will miss the rest of the MXGP of USA after tweaking his knee during the timed practice session at WW Motocross Park.

After finishing out the Lucas Oil Pro Motocross season with 1-2-2-2 moto finishes and capturing his first overall victory, many considered Cianciarulo to be a favorite coming into this weekend's race. AC logged the sixth quickest time in the free practice session and then had a crash in the timed session. We originally thought he might be okay after he rode his bike to the mechanics' area and then came back out to do three more laps, but as stated above, he'll sit out the rest of the weekend.

After tweaking his knee is practice, Adam Cianciarulo will sit out this weekends racing in Jacksonville. @MonsterEnergy @KawasakiUSA

Thomas Covington continued to ride excellently in the qualifying race as he grabbed the holeshot and steadily stretched out his lead to a comfortable five second lead over Justin Cooper. After the race, MXGP-TV's Lisa Leyland got up with Covington. “It’s a good feeling going into tomorrow," he said. "I kind of wanted to take it easy today because the track is pretty heavy and it’s hot.”

The best battle on the track was going on just behind Covington with Cooper, Thomas Kjer Olsen, and Jorge Prado all within a few seconds of each other for a large majority of the race. Prado had a sneaky good line going over the dragon's back on the back section of the track. He would skim the first few whoops and then use the top of the dragon's back to quad over the remaining whoops and into the corner. It looked like it took a lot of energy to clear because the track was so soft, but if the track dries out look for this to become a hot line. The hot Florida weather did seem to affect Prado though, as he dropped back to fifth and crossed the line without his goggles on.

The MX2 points leader, Pauls Jonass, got off to a slow start as he rounded the first turn around fourth place and dropped back a few positions early. Toward the end of the race, though, he put on a great charge and worked his way up to third place.

Jeremy Seewer, who currently sits second in the points, put on a good charge to come from 21st after the first lap up to 11th place. This could be a big weekend for Seewer in the championship as he could potentially put a few extra riders between himself and Jonass that wouldn't normally be there. Keep an eye on that tomorrow during the motos.

RJ Hampshire will have some work to do tomorrow as he'll have the 28th gate pick because of a crash and then bike issue late in the race. His GEICO Honda teammate Chase Sexton finished seventh and Yamalube/Star Racing Yamaha's Mitchell Harrison finished in sixth.

In the MXGP qualifying race Romain Febvre grabbed the holeshot, but was quickly overtaken by Antonio Cairoli and Jeffrey Herlings. Herlings and Cairoli went back and forth for a little bit and then at the halfway mark of the moto, Herlings made his way into the lead and stretched it out to 19.666 seconds by the end of the 20 minute plus two moto.

On his way to the win, Herlings looked smooth and comfortable, floating over the small bumps and carrying his speed in the corners by avoiding the soft, deep dirt on the edges of the track. After the race, Herlings told MXGP-TV's Lisa Leyland that the track was still a little wet so there were a lot of lines to choose from.

MXGP points leader Antonio Cairoli gave Herlings a fight for a couple laps, but seemed to back it down in the waining laps of the race, most likely saving some energy for tomorrow's motos where he can potentially wrap up the championship if he doesn't lose any points to Herlings. If Cairoli is able to wrap up the title tomorrow, it will be the ninth of his career.

Romain Febvre rounded out the podium and he was really the only rider that was putting in times that were close to the two KTM riders above. His best time was about half a second off of Herlings' and .4 off of Cairoli. Febvre currently sits sixth in the championship standings, 12 points behind Tim Gajser, so a good day tomorrow could put him inside the top five.

Tomac continued to struggle after having two rough practice sessions. In the qualifying race it looked like he was struggling to find a flow on the deep track and was repeatedly landing front wheel high and came up short on the large tabletop in the middle of the track several times. He'll have the 12th gate pick tomorrow and will need to make some big changes if he wants to have the battle with Herlings that many are hoping for.

Justin Barcia got a great start and was running in the top five when he got together with Gautier Paulin. The crash appeared to damage his radiator or pull a hose loose as steam poured out of the front of his bike and he was eventually forced to pull off. Paulin put in a strong charge after the crash to make his way back up to eighth place.

That's all the action for today, but Race Day Feed will be back tomorrow with full coverage of the motos, so be sure to check back in. For now, take a look at how the championship points stack up going into the points paying races tomorrow.