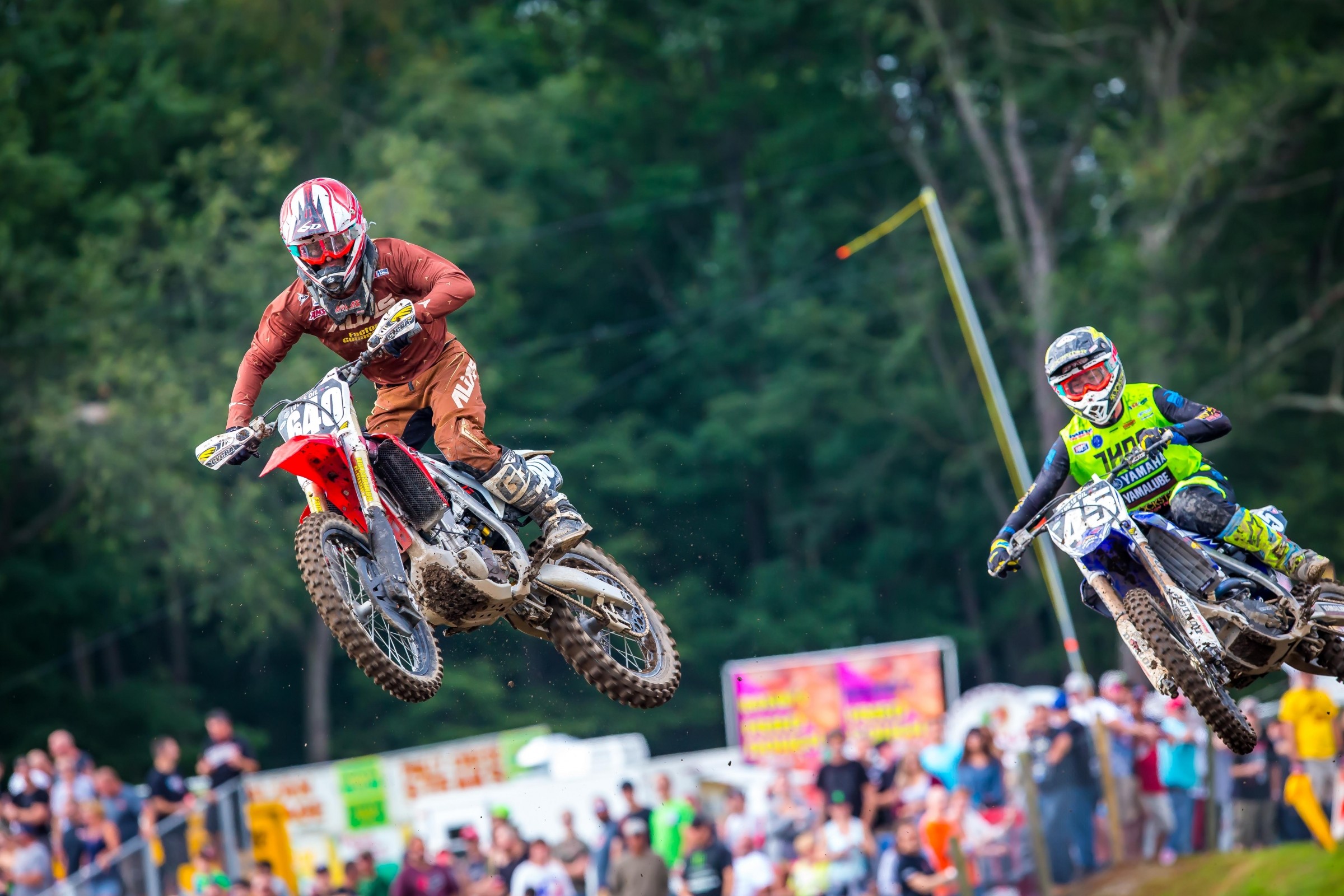 Aaron Zielfelder is a fast kid from New England who cut his teeth racing local NESC events. He doesn’t live at a training facility down south, has never ridden on a supercross track, and works a day job at his family’s Christmas tree farm. This summer, he has taken a break from the NESC races and stepped up his program in order to race Lucas Oil Pro Motocross.

Riding the #640 Honda CRF250R, Zielfelder has done remarkably well for a local guy. He qualified for all but one of the races he entered. Just qualifying for a National is a very respectable accomplishment, but Zielfelder has even managed to crack the top 25. From the outside, he is not much different than any other triple digit local racer who makes the show.

However, there is one difference for Aaron: his father, Rick (aka Ziggy) is the founder and part owner of the GEICO Honda team. It’s natural to think that when you have access to those resources, you would take advantage of them. Well, its not quite the case, as Aaron is doing it on his own terms, and without the direct support of his father’s team.

We spoke to Aaron just after the second moto at Unadilla where he carded a respectable 29-29 finish in the 250 Class.

Racer X: I’ve been seeing you here at the races all summer. I know you’re a New England/NESC guy, but it looks like you have stepped up your game. You have consistently qualified for several nationals now.
Aaron Zielfelder: Yeah, it’s been great. This year has been a big step in the right direction for me. I’ve made all but one so far this year. I think this was my sixth or seventh one that I have made the show. I’m happy just slowly picking away, just getting better and better and getting more used to racing the Nationals. I am just having a lot of fun with it.

What’s been your best result so far?
I’m not sure overall. I want to say 26th or so, but I’ve gotten 22nd in a moto, which is my best. And that was with a fall, too. I really want to get some points before the end of the year, so that’s kind of the goal. We’ll see. Four more motos to get inside that top 20.

How did it go today in the mud?
Today was a struggle. The mud was gnarly. I went 29-29 but I was in 23rd I think or something in the mud and then I fell. I was right in the main line and then actually [Joey] Savatgy ran into me. Luckily, he didn’t go down, but then I fell again and couldn’t start the bike. Kind of a struggle, but 29-29 was a solid day. I was happy just to keep the streak going and making it in.

I hate to do this to you, but you’re a New England guy. That means you are supposed to be a mud guy!
I’m usually the type of guy that’s not the fastest, but I stay up and I end up pretty good, but not today. I went down. It happens. The track was really rough. It was hard underneath. It was tough because all the ruts and everything were still there from earlier in the day. It was just like, you hit them, they just kick you everywhere and it’s slippery.

Your father owns a factory team. You’re not riding for the factory team, but obviously you are close to the action. How does your role with that program fit into things? Do you get any giveaway parts or any freebies?
They definitely help me out just with a bunch of little things. Like today they gave me some foam for my helmet and for the mud. The engine in my bike is close to what some of our amateur riders have, but I don’t have the factory stuff. But that’s it. A lot of people think I have a full GEICO bike, but I don’t. You have to earn that. I get an amateur spec engine, and basically it is what it is. They definitely help me with whatever questions I have or what not, but it’s not a full GEICO bike and I am doing this on my own. My dad was always a stickler about having to earn anything special.

Are you involved with the team at all?
Not really. I know all those guys really well just from being around it forever, but I’m not really involved in any way. They’re really cool, and I can go over and hang out, but I do not have a role.

How old are you?
I’m 22, and I finished up high school a few years back. So now I’m just working for my dad. We have a family owned Christmas tree farm, in addition to the motocross team and Factory Connection. That’s kind of my main thing. I trim all the trees and everything during the summer. Then in the winter sometimes I’ll go and work at Factory Connection and help out there because that’s when they’re busiest.

I saw you at Washougal this year. That’s a long ways from New Hampshire. Did you drive to Washougal, or did you throw a bike on the team hauler and fly?
No, we drove out in my van. It was I think 45 hours. That was a long drive, but it was definitely worth it. A cool experience. That track was actually kind of my style. I like the harder, kind of slippery, throttle control stuff. That was a good trip.

You are qualifying for these races and finishing well. That is a big step. What’s next for you after the Nationals are finished?
I will definitely finish the season with the last two. I’ve never even ridden supercross so I don’t really have any plans to do that next year. I’ve done pretty well this year so I’m hoping to do the whole series next year if I can. So, probably just work and try to figure that out, train and get ready for the Nationals. Maybe do some local stuff this fall, but nothing really too crazy planned.

You know, every time I see your dad at the races, where he’s got both his team and you riding, he says it’s the most stressful weekends ever.
Yup. He’s running back and forth all day. He has his hands full.

Thanks for chatting and good luck going for some points in those last four motos. Any other sponsors you want to thank?
Obviously my parents, my mechanic Chris, Factory Connection, Alias, 6D, 100%, Dunlop, Amsoil, Decal Works, and the guys over at the team, my girlfriend Casey and the Prior family. A bunch of people, but those are the main ones there. Definitely a lot of people helping me out and allowing me to travel all over the country and race these things. It’s been a fun summer.