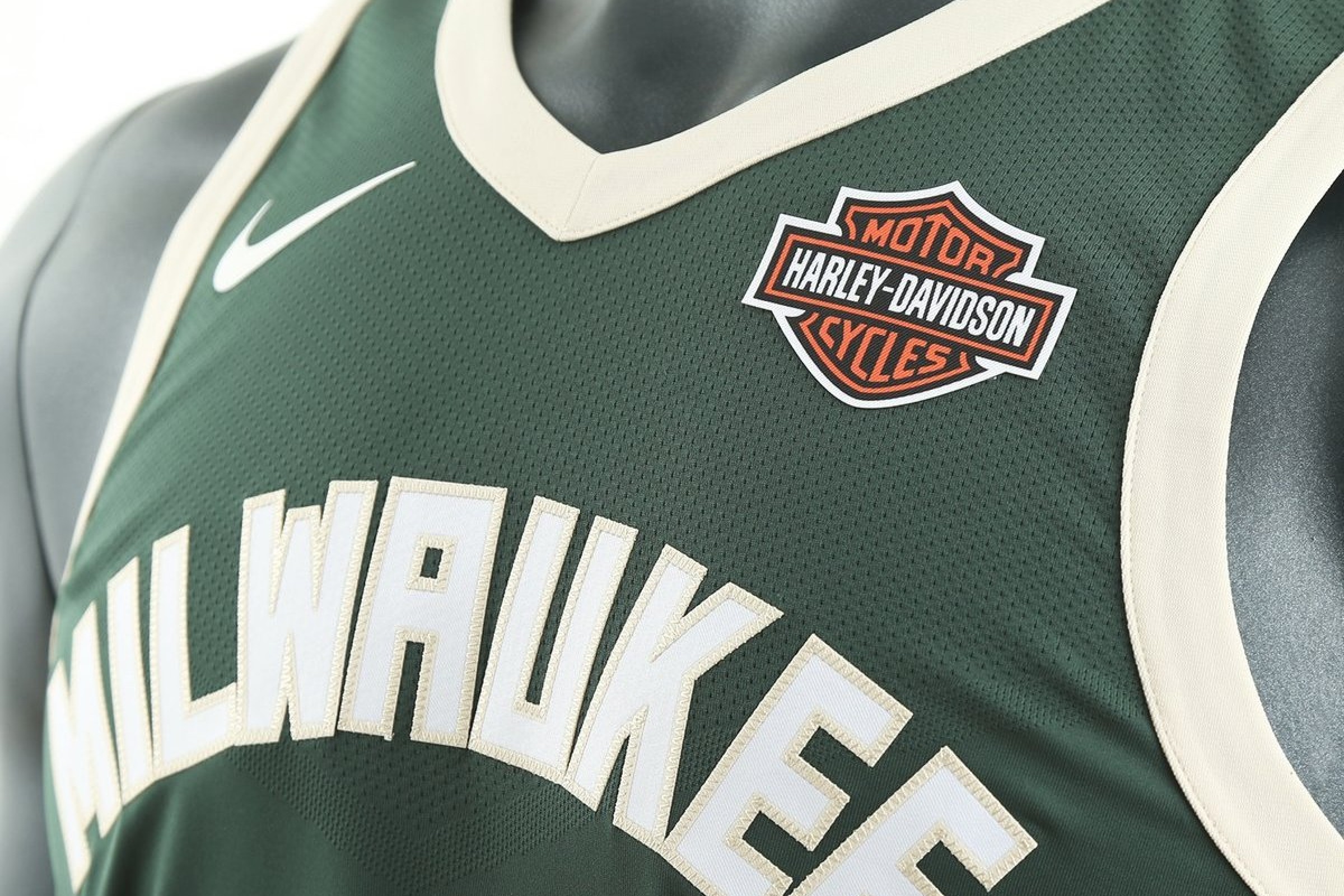 Last year, the National Basketball Association announced a three-year pilot program for jersey sponsorships. A small 2 ½ x 2 ½ inch logo on the left shoulder will be featured on team jerseys during the 2017-18 season. These tiny logos don’t come without a price, as most are fetching between $2.5 and $8 million annually, according to a report by Forbes. Companies such as Stubhub (Philadelphia 76ers), Goodyear (Cleveland Cavaliers), Disney (Orlando Magic), and Fitbit (Minnesota Timberwolves) have already jumped on board. (You can view a full list of team sponsors here.) Last week, Milwaukee-based Harley-Davidson announced a deal with the Bucks. Per the Milwaukee Journal Sentinel, “Bucks president Peter Feigin appeared on Fox Business Network and estimated that revenue from jersey ads could bring in $2.5 to $6 million per year, depending on the team.” More from the report:

For the Bucks, the sponsorship creates an opportunity to partner with another Milwaukee-based brand while generating additional revenue.

Early estimates point to these small ads — the Harley-Davidson logo patch will take up a 2.75-by-2.09-inch area on the left shoulder of Milwaukee’s jerseys — generating $150 million or more for the league each season. The revenue from those ad sales will be shared with the players, per the collective bargaining agreement.

While the Bucks’ deal with Harley-Davidson will last for three seasons, the yearly revenue brought in by the sponsorship has not been disclosed. Earlier this week, Bucks president Peter Feigin appeared on Fox Business Network and estimated that revenue from jersey ads could bring in $2.5 to $6 million per year, depending on the team.

Harely's deal with the Bucks wasn’t the only announcement from the American motorcycle brand last week. Harley-Davidson has also partnered with iconic rock band Guns N’ Roses, launching a special capsule collection in conjunction with the bands Not In This Lifetime Tour. Created in partnership with Bravado International Group, Inc., the limited-edition line will be available exclusively at Harley-Davidson dealerships.

“We are excited to partner with Bravado to celebrate Guns N’ Roses as this collaboration brings two brands together in an expression of freedom and rebellion,” said Mary Kay Lee, director of Harley-Davidson general merchandise in a statement. “The new styles will only be available for a limited time, so visit your local Harley-Davidson dealership to check them out.”

Prices will start at $30, according to a Harley-Davidson press release.

No Chick-fil-A for Falcons Fans

Despite the incoherent ramblings from a certain colleague (cough … Steve Matthes … cough) Chick-fil-A is THE greatest fast food joint in the entire world. Yes, world! Maybe even universe. The Atlanta Falcons are set to open the brand-new Mercedes-Benz Stadium this year, which will also host Monster Energy Supercross in 2018, and a Chick-fil-A will have a stand in the stadium. One problem. Chick-fil-A is closed on Sundays. Football, for the most part, is played on Sundays. And according to ESPN, the GREATEST fast food restaurant in the universe, will remained closed during the games. Good news: supercross takes place on Saturday! Suck it, Matthes. More from ESPN.

The stand will be open for the two college football games, dubbed the Chick-fil-A Kickoff games, during the season's opening week. The game between Alabama and Florida State is on Saturday, Sept. 2, while the Georgia Tech-Tennessee game will take place two days later on a Monday. The stand will also be open for non-Sunday games played by the Falcons' co-tenant, the Atlanta United of Major League Soccer, also owned by Blank.

While fans of the Chick-fil-A brand are often baffled by the idea of being closed one day a week, Cathy, who died in 2014, always said that being closed Sunday made Monday that much busier.

Earlier this month, restaurant industry trade publication QSR Magazine named Chick-fil-A the highest-grossing franchise in the United States, estimating that each store pulled in an average of $4.4 million in annual revenue, $1.7 million more than the average of the next-highest-grossing chain (Whataburger, $2.7 million).

The Dumbest Lawsuit Ever?

The United States is a very litigious country, filled with dumber and dumber lawsuits by the day. But this one may top them all. According to Motor Trend, Porsche recently settled a class action lawsuit from a bunch of owners claiming they had to buy polarized sunglasses because the trim in their car was blinding in the sunlight. Seriously. A little more from Motor Trend:

The settlement was actually proposed in December of last year, but we didn’t find out about it until just recently. It applies to owners or lessees who have or had any 2007–2016 Porsche with a Cognac, Luxor Beige, Natural Brown, Platinum Grey, or Sand Beige dashboard. If you bought sunglasses or made other modifications to your car to reduce the glare, you can get between $50 and $175 in compensation from the German automaker.

According to Motor Trend, the “only Porsche with a starting price just below $50,000 is the base-model Macan, a compact crossover with a turbo-four under the hood.” A new pair of sunglasses retails for much, much less.

Although he’s currently still on the mend from a career-threatening arm injury suffered at Anaheim 2, Honda HRC’s Ken Roczen is still very active on his social media. Yesterday, he shared a short clip of himself riding a 450—at the age of 13!!!!—with the following caption: “This one time. My bike broke at a race. I was 13 years old. Borrowed a friends 450. So I raced that thing lol. What ever I could get my hands on. Haha” This is pretty amazing!

Tennessee Knockout Isn’t for the Weak

The KENDA Tennessee Knockout—absolute hell on two wheels—ran this past weekend in Sequatchie, TN, and my goodness it looked brutal. KTM’s Cody Webb won for the fifth consecutive year, beating out Graham Jarvis and Mario Roman. I can honestly say, I would enjoy zero part of this.

Be honest: could you finish this race?

Electric is all the rage right now, and probably the future of motorcycling, and now BMW is also releasing an electric kick scooter, called the X2City. In the July announcement, BMW said the scooter has a top speed of up to 25 km/h and an electric range of around 25 to 35 kilometers. Also, it will be classified as a “Pedelec25”, meaning it will not require a helmet or a license for anyone that is 14 years old and older. BMW isn’t selling it through their motorcycle dealer network, instead offering it through production partner Kettler’s website and retailers in Europe (no word yet on plans for the U.S.). BMW has not announced a fixed price, but said it will be below € 2,500.

Sad news from the stunt world this week, as Joi “SJ” Harris passed away on Monday after a motorcycle stunt went wrong on the set of Deadpool 2 in British Columbia. She was 40. Per the Hollywood Reporter, “witnesses told local reporters Harris did the stunt perfectly four times, but on the fifth go, something went wrong. She was thrown into the ground-level plate glass of a building.

According to a profile in Black Girls Ride Mag, Harris was the first professional African American female road racer when she began competing in 2014, just four years after she learned to ride a motorcycle.

Our thoughts and prayers are with her family and friends.