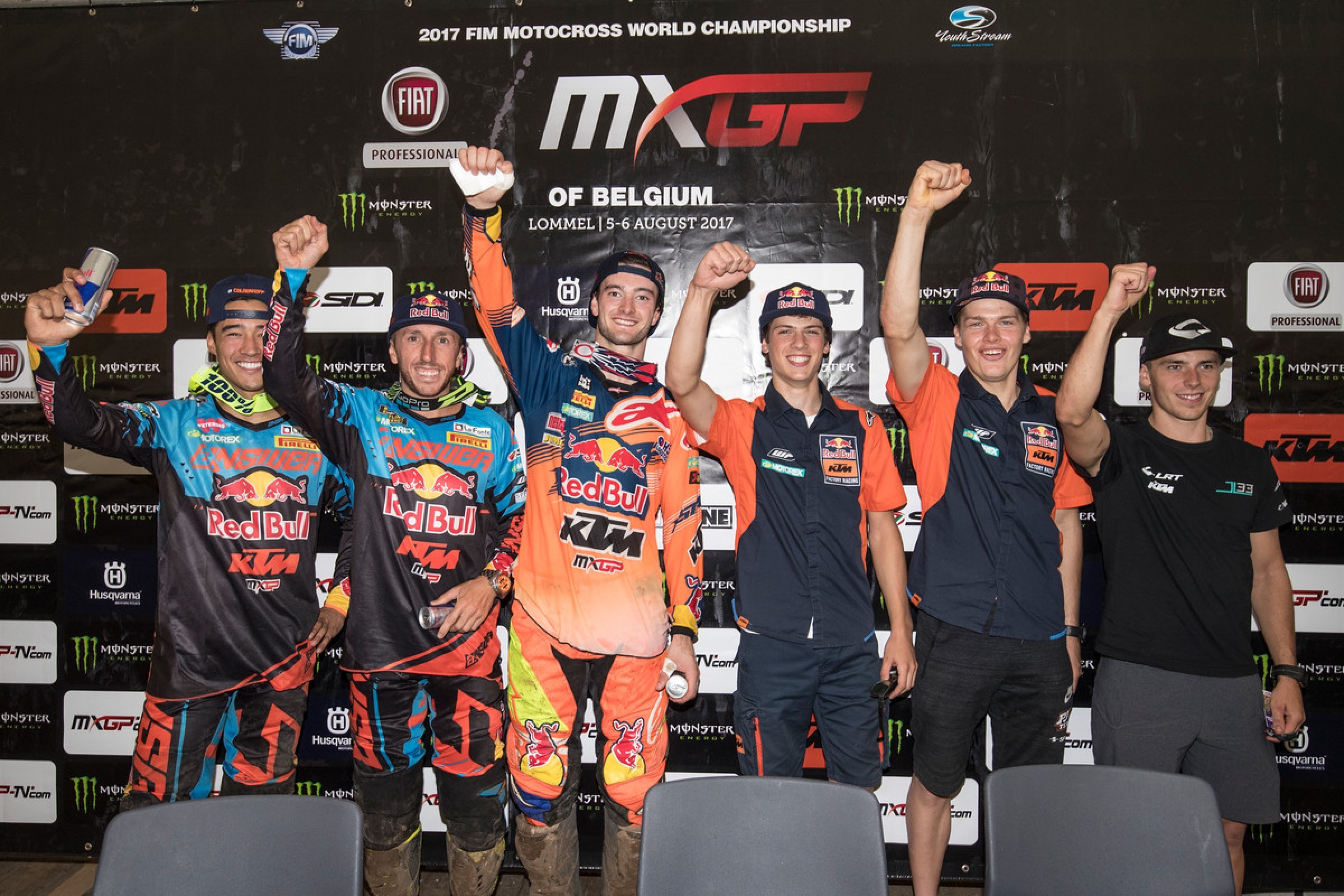 Home to some memorable scenes since becoming Belgium’s principal stage of motocross—a distinction held for the last four years—Lommel served up some more defining images of this expansive 2017 FIM Motocross World Championship on Sunday. The much anticipated duel through the sand between Red Bull KTM teammates Antonio Cairoli and Jeffrey Herlings (and a sequel to their tussle on a shallower and slightly less bumpy sandy surface at Ottobiano in Italy in June) materialized and enraptured the massive crowd on a sunny afternoon for the 14th round of 19.

It was the second moto flurry of (block) passes and trading of respectful blows as well as the ebbing flow of their respective pace in the sand that raised tension. Cairoli entered the Grand Prix with a 92-point lead in MXGP with six rounds and 300 points left for grabs. He stated his wider aim was the bigger prize while Herlings was hungry for a podium he’d missed in Czech Republic two weeks ago. It was the latter who dashed free from the third KTM team member, Glenn Coldenhoff, in the first moto; Cairoli eventually registering second place. Shaun Simpson (the Wilvo Yamaha rider, and winner at Lommel in 2015, was a spectator due back from a broken arm in two Grands Prix time) suggested at the break that Cairoli was holding something back for a second moto charge. The Scot proved to be right.

The brief incursion had the busy spectator banks animated as the race seemed to swing both in Cairoli and Herlings’ favor at different times. Herlings was motivated to chase his first Lommel win since 2011 (against Ken Roczen no less and the Dutchman hadn’t competed on the Belgian sand for four years due to injury) and also avenge his defeat at Ottobiano where he took on his rival despite stomach sickness and suffering in the heat. Cairoli took the fight to Herlings, eight years his junior. The decisive moment came in the last 10 minutes as Herlings pushed and Cairoli eased, perhaps having done the mathematics with Monster Energy Kawasaki’s Clement Desalle down in fourth overall and yet another gain of points for the conquering Sicilian. With a second overall finish, Cairoli inflated his margin to 99 points—now over Herlings—with 250 points left up for grabs.

With Coldenhoff riding superbly to make sure of fourth place in the same sprint, KTM owned all three steps of the premier class podium for the first time. With Jorge Prado, Pauls Jonass, and Julien Lieber opening champagne in that order in MX2, the Austrian brand shut out Belgium completely and sent the Red Bull team into excitable meltdown. There were trophies and plaques galore back in the long orange awning afterwards. It was a KTM show in the prize giving ceremony and this was no fluke. In the first moto alone Herlings, Cairoli, and Coldenhoff held a staggering gap over the rest of the field—a distance that was over 20 seconds at one point.

In the second affair, the two principal protagonists had the spotlight again to themselves and Herlings ranked 41 seconds ahead of Rockstar Energy IceOne Husqvarna’s Max Anstie in third; the Brit is a double MX2 GP winner at Lommel (with different brands no less) and will be pleased his second top three classification of his rookie 450 year wiped out the disappointing run to 14th in the first moto.

Cairoli and Herlings are now, in effect, hazy title rivals. Herlings has publicly conceded his chances on several occasions and at 99 points Cairoli would have to sustain some kind of injury to lose a fantastic opportunity of a ninth world crown and seventh in MXGP since 2009 (KTM’s first with the 450 SX-F). Enticingly their sand wars have not culminated: the Grand Prix of the Netherlands at Assen the week after the USGP will invite another face-off. Herlings claims he is in touching distance of his goal of finishing 2017 as runner-up and providing KTM with an unheard of 1-2 in the series, but Lommel was undoubtedly his.

“I liked it; it was fun,” he commented. “I know Tony a long time and have been studying him for a long time and I know he wouldn't clean the s**t out of me and I wouldn't do the same, so to brake-check a bit and stuff like that—I think it is okay. We are both teammates and we both know what to do. I know he has the championship on the line so I don't want to clear him out or he gets injured or something like that. It was clean racing and I enjoyed it. I’m happy I got the better of him this weekend, but in seven days we have another GP!”

The shifting sea of bumps and wavy ruts may have faced the other way as the Lommel trajectory was reversed and altered to freshen up the popular training venue but it was no less easy.

“A lot of riders were practicing a lot in the week leading up so it was good that there was something new for everyone,” assessed Pauls Jonass. “Some of the new parts were quite strange and hard to get a rhythm, but it was good to have a long lap-time.”

Jonass might have watched teammate Prado take a second win of his rookie MX2 year (just his second term on a 250cc four-stroke), but left Lommel satisfied for two reasons. Firstly, his comeback from last place—courtesy of his participation in a second corner pile-up to fifth place—was a lesson in race management, control, and sand skills and was probably the finest performance on the day. Secondly, that fifth spot was just behind MX2 championship threat Suzuki’s Jeremy Seewer. Jonass had defeated Prado to own the first moto and the upshot of the day’s events meant Jonass pulled out a 50-point gap at the top of the MX2 table—his biggest margin of the season so far.

Jonass was heroic to notch his 10th podium in a row and his season stats indicate that he is already a deserving winner of the category. But MX2 has rarely followed the script in the last few years and Herlings will emotionally testify to the curveballs that can come flying along. Prado was also excellent. Again assisted by a start technique, 250 SX-F power, and a light frame that continually gives him an advantage every moto (like a young Cairoli in 2004 and 2005 actually), Prado escaped undisturbed to win for the second time in the second outing. Lieber’s consistency at his home Grand Prix and on a weekend where he was confirmed to represent his country at the Motocross of Nations rounded off the orange crush.

Suzuki’s Arminas Jasikonis was admirably resilient and defiant of cracked ribs to attack the sand like few others, although his flight to the top four was ended by a crash in the second moto. Monster Energy Yamaha’s Jeremy Van Horebeek was sprightly to fourth place in the first moto and Rockstar Energy IceOne Husqvarna’s Gautier Paulin was quietly efficient to fifth overall, but badly needs another podium appearance to heighten confidence again.

Rockstar Energy Husqvarna’s Thomas Covington was on course to better his first moto of ninth position by holding a comfortable runner-up berth in the second sprint. The American lost control through the fast left sweeper by the crowd and crashed, needing medical attention for what turned out to be sore right area of his back and torso. British duo Conrad Mewse and Ben Watson (the Hitachi KTM rider fresh from British Championship winning acclaim) slotted into top 10 positions and continue to give MXoN team manager Mark Chamberlain headaches to solve his best trio for the Matterley Basin curtain-closer on October 1.

The Motocross of Nations topic rolled around Lommel with debates emerging over the spiralling interest and participation of Team USA (ironically as the contest moves to perhaps one of the best and most epic circuits in Europe in Matterley and a course far less idiosyncratic of the old-school Europeaness that the Americans have faced in recent years) and the Italian (Cairoli, Lupino, Cervellin) and Belgium (Desalle, Van Horebeek and Lieber) squads were presented.

The Belgian GP also carried an atmosphere of foreboding with the final six rounds of 19 taking place in six different countries and two continents in just seven weeks. A slew of very capable Grand Prix winning athletes were also still looking for saddles in a dwindling market that was forcing some to analyse the state of the landscape.

There wasn't much time to pause for reflection however with the whole show moving from Lommel down to the fancifully nicknamed Frauenfeld-Gachnang near Zurich for the Grand Prix of Switzerland next week. The first Swiss fixture this century occurred at the purpose-built site last year and was a major hit, with a near capacity attendance. Seewer looks strong and thanks to decent local interest in the premier class through Arnaud Tonus, MXGP could again be heading for one of the more striking events on the 2017 slate.