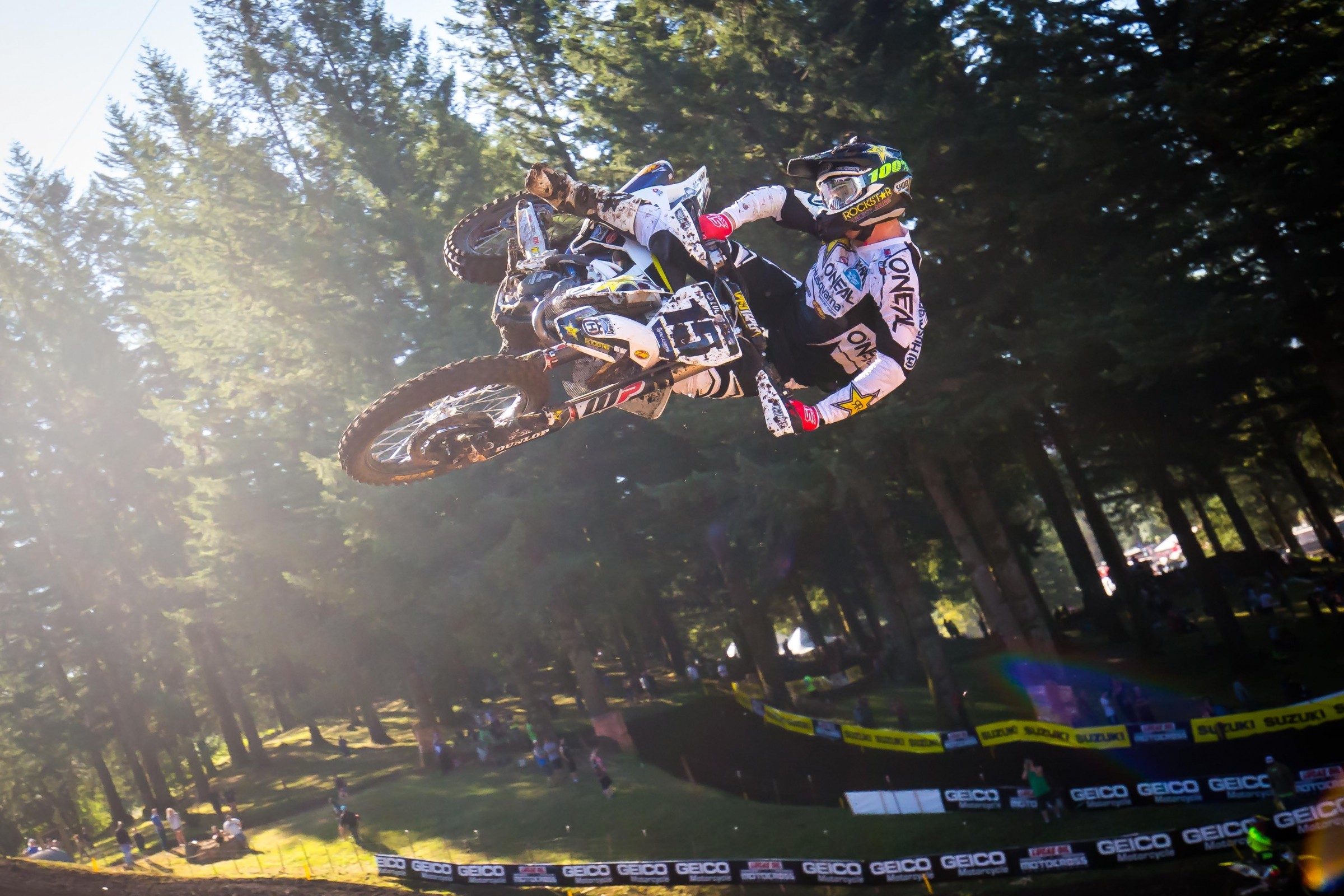 Welcome to the Racer X Race Day Feed, coming to you from the beautiful Pacific Northwest. The gate drops on the ninth round of Lucas Oil Pro Motocross today, and if this round is anything like the ones before it there’s going to be plenty of action. To keep track of it all check this page often—we’ll be updating it as the day unfolds. From who was fastest in practice to moto reports and everything in between, you’ll find it all right here. Posts are in chronological order, so scroll to the bottom for the latest info. And as usual, you can catch the blow-by-blow on Twitter, @Racerxonline.com.

It’s an absolutely gorgeous day for racing here at the Peterson Cat Washougal National. The air is crisp, a thin layer of mist is floating through the towering fir trees that line the track, and the occasional sound of revving motorcycles can be heard echoing across the grounds. As far as weather is concerned, it’s a nice departure from last week’s heat and humidity.

On the injury front, we’re looking at a slightly thinner field. Jason Anderson is out today, thanks to road rash suffered on his hands in a bicycle crash, and Yamaha’s Cooper Webb is out with a knee injury incurred at Spring Creek. Not surprisingly, the Yamaha truck isn’t present in the pits today. In the 250 Class we’re missing Austin Forkner, who’s out with a concussion, and Alex Martin, who injured his collarbone and scapula while practicing, will also miss today’s race. For a complete look at who’s in and who’s out, check out our Injury Report.

In other news the announcement dropped earlier this week that the RCH/Yoshimura/Suzuki Factory Racing is shutting down following the season. For more on that, check out this week’s Racerhead.

The first set of practices are in the books here at the Peterson Cat Washougal National, and if the motos are as close as the fastest practice times, we’re in for quite a day of racing. In the 250 Class Zach Osborne was fastest, but just barely. Adam Cianciarulo was less than two tenths of a second behind, and even their second best times were only a tenth apart! The two spent much of the session physically near each other too, with Osborne on Cianciarulo’s tail for multiple laps. Last week’s winner, Joey Savatgy, was less than half a second behind them, with Jeremy Martin and Dylan Ferrandis rounding out the top five in the session. Gared Steinke was twenty-fifth on his two-stroke 125.

In the 450 Class it was Marvin Musquin setting the fastest time at the end of the session, but it was less than a tenth faster than Eli Tomac. Blake Baggett was next, but he was nearly a second slower. We’ll see if he can get any closer in the second session after getting a chance to make adjustments.

In the second session it was all Cianciarulo, who logged a fast lap over half a second faster than teammate Savatgy. Shane McElrath was flying in this one too, and ended up third overall, about one second slower than Cianciarulo.

When the 450s went out a second time practice was temporarily interrupted when Justin Barcia went down hard. He stayed on the ground for quite a while as the Alpinestars Medical Crew checked him out. They ended up loading him onto a stretcher and putting him in an ambulance. He was experiencing neck pain, but initial reports suggest he’s probably okay. He was taken to the hospital to get checked out as a precautionary measure. When practice resumed it was Tomac who would spin the fastest lap. Musquin was about a second-and-a-half slower, with Martin Davalos, Freddie Noren, and Blake Baggett rounding out the top five.

Aaron Plessinger kicked off the first moto with a holeshot and just like that, it was over. The Yamalube Star Racing Yamaha rider immediately started stretching out his lead over Sean Cantrell. By the halfway point he’d already put ten seconds between him and Adam Cianciarulo, who’d made his way into second from fifth. Cantrell was having a pretty good race and hung in second for quite a while, but by the halfway point he started losing spots. He didn’t completely throw out the anchor though and was able to hang on for eighth. Points leader Zach Osborne got a bad start, but that didn’t stop him from putting his head down and charging. He was flying and kept pushing until the end, stealing fourth from Mitchell Harrison just before crossing the finish line. He nearly got Dylan Ferrandis for third at the line too, finishing just under half a second behind the Frenchman. Jeremy Martin was never able to put it together and was unable to charge to the front after a mediocre start. He ended up ninth.

Marvin Musquin picked up where he left off last week by immediately taking the lead, but he wasn’t able to check out right away. Martin Davalos briefly pressured him for the lead, then a few laps later Eli Tomac was all over him. The two staged an epic battle, even banging into each other at one point, and it seemed like it was only a matter of time before Tomac would be able to make something stick. But that’s not what happened. Instead, Musquin maintained a scorching pace and after a while Tomac slowly started losing time to him. By the time the checkers flew Musquin had stretched his lead to about ten seconds over Tomac.

Cole Seely rode to a lonely third, with Davalos holding down fourth all by himself. Dean Wilson was fifth, but nearly got zapped at the line by a charging Weston Peick. Speaking of Peick, he and Blake Baggett had a terrific battle of their own that lasted, off and on, for most of the moto. At times it looked like Baggett was about to pounce, but then Peick would stretch it back out. Peick finally got away in the closing stages of the moto. Elsewhere there were notable rides from Justin Hoeft, Tyler Bowers, and Henry Miller. In just his second race as a pro, Hoeft was able to secure eleventh aboard the 51Fifty Yamaha. Bowers was sixteenth in his first National of the summer, while Miller was solid in  thirteenth. Chris Alldredge made his return to racing today, taking nineteenth in the first moto.

Joey Savatgy nailed the holeshot in this one but it wasn’t long before RJ Hampshire was pressuring him. The two went at it for a bit before Hampshire pulled a brilliant move up the inside of Savatgy to take the lead. After that the GEICO Honda rider started slowly gapping Savatgy, but a few laps later Savatgy reeled him back in and started applying heavy pressure. After hounding Hampshire for a bit, Savatgy floated past him as the two crested the top of Horsepower Hill and cut to the inside to make a pass. Savatgy then took off to take the moto win.

Zach Osborne didn’t get a good start, but that doesn’t seem to matter much these days. The Rockstar Energy Husqvarna rider kept pushing and just past the halfway point found himself in fifth and roughly seven seconds behind race leader Savatgy. He continued to make moves, powering around the outside of Dylan Ferrandis and scrubbing by on the next jump for fourth. Ahead of him was Adam Cianciarulo, who was trying to get around Hampshire after Hampshire lost a ton of ground in a small tip-over. Hampshire recovered and got back away, and with three laps to go Osborne got around Cianciarulo in the same spot he went by Ferrandis. The troubles continued for Cianciarulo too, who was passed by Ferrandis on the final lap, yanking the overall win out of Cianciarulo’s hands. The finishing order resulted in an unlikely overall win for Joey Savatgy, who went 7-1 on the day. There was a three-way tie for second between Osborne, Ferrandis, and Cianciarulo, with Cianciarulo getting the heartbreaking short end of the stick on account of his inferior second moto finish. After nearly taking the overall win Cianciarulo ended up fourth. Hampshire and Plessinger tied for fifth, with Hampshire getting the nod for the spot.

Moto one winner Plessinger was running sixth but went down early in the race and dropped down to twelfth. When it was over he’d worked his way back up to ninth.

Martin Davalos got out of the gate extremely well in this one to take the holeshot, followed by Justin Bogle, Blake Baggett, Marvin Musquin, and Eli Tomac. Musquin and Tomac didn’t take long to get by Bogle and Baggett, and when Musquin eventually got by Davalos he dropped the hammer in the hopes of getting as much room as he could between himself and Tomac. It worked too—when Tomac got around Davalos Musquin had a pretty sizable lead with about twenty minutes to go. Tomac was either content to take second (unlikely) or Musquin was just untouchable because Tomac never got close to Musquin.

Tough break for Christian Craig, who was running seventh at the halfway point when he and Dean Wilson got together. Craig must have hit a stopper bump or clipped Wilson with his front brake because his bike stopped extremely suddenly and pitched Craig over the front.

Elsewhere there wasn’t a whole lot of action in this one, as the top ten were fairly spread out. Justin Bogle, who was riding with a sore shoulder from a crash last week at Spring Creek, dropped a few spots in the second half, while Peick slowly made a few passes in the final ten minutes of the race.