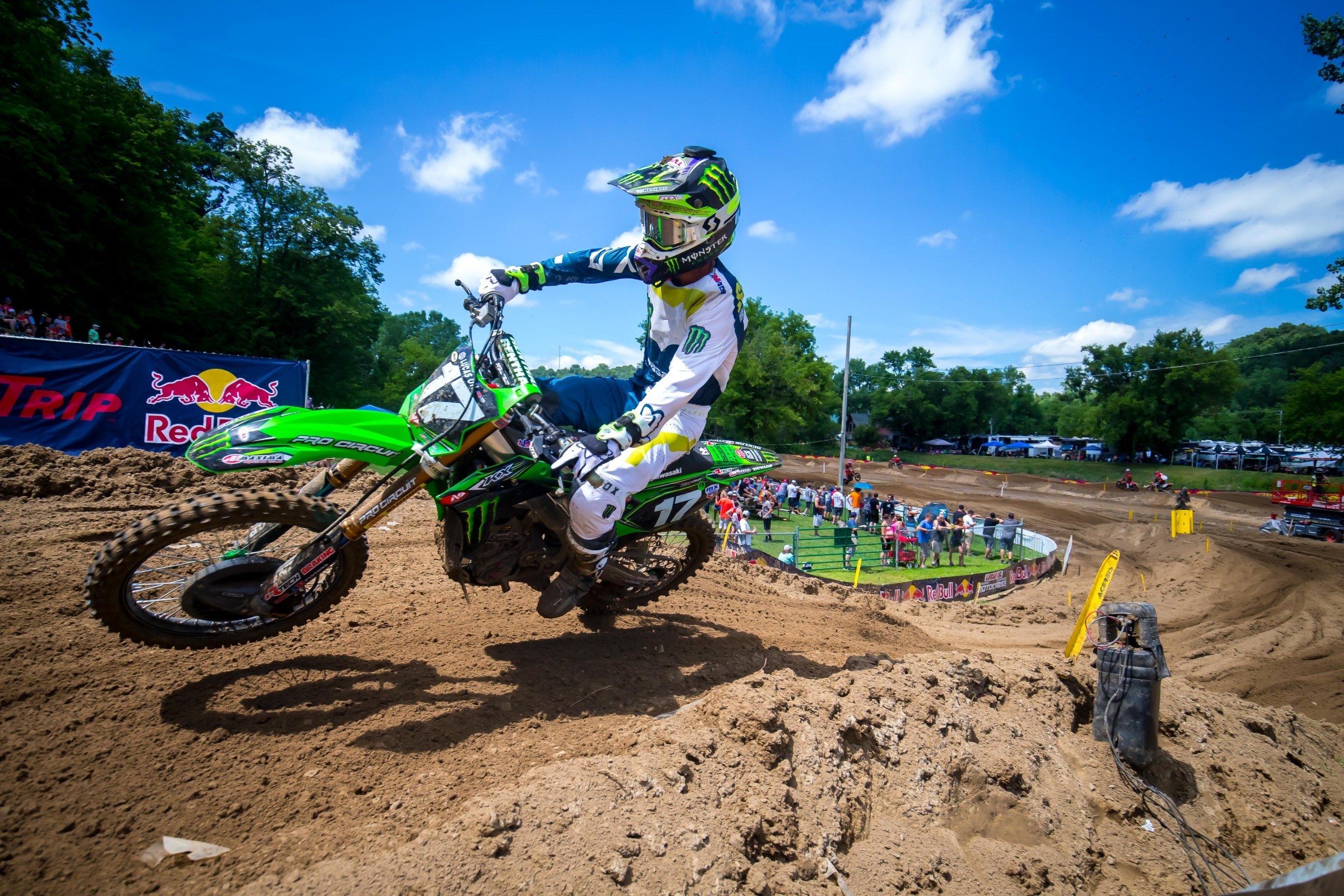 On Saturday, June 3, 2017 at the Thunder Valley National in Lakewood, Colorado, Monster Energy/Pro Circuit Kawasaki’s Joey Savatgy held off a hard charging Jeremy Martin to win the second moto of the third round of the Lucas Oil Pro Motocross Championship by .497 seconds. In doing so, the Californian nailed down his first victory of the summer.

All looked well for Savatgy and the Kawasaki-backed outfit, but then the results fell off. High Point, Muddy Creek, RedBud, and Southwick all brought off-song performances and getting up on the podium appeared to be a bridge too far not only Savatgy, but the entire Corona, California-based race effort. With a weekend off between Southwick and the forthcoming round at Millville, Savatgy and the group of people that surround him immediately went to work in a collective attempt to sort some things out. Whatever they did, it worked. In fact it all worked quite well as on Saturday afternoon in Minnesota, Savatgy was the class of the field, motoring to convincing 1-2 moto scores.

The morning after, Racer X caught up with Savatgy.

Racer X: Joey, what are you up to the morning after your big win at Millville?
Joey Savatgy: Yeah, I’m back in the house, man. I’m just relaxing and enjoying a Sunday after a race weekend.

Being home after you win a big race has to be nice, huh?
Yeah, everything about Sunday is better when you have a good race. The mood, everyone around you, the team, the morale—everything. Obviously, it’s important for me too because it’s nice to get on, not a streak, but to get in a groove.

You won the overall at Thunder Valley back in early June, but then things just sort of fell off for not only you, but the entire Monster Energy/Pro Circuit Kawasaki team.
Yeah, man, it’s all fun when everything is going good, but when things aren’t going ideally, it feels like you can’t do anything right. As you said, there was a period there where we were struggling a lot. It was frustrating because I know how hard the team works and everything. It seemed like the results from all the effort we put in wasn’t showing, you know? That’s frustrating for me, as well as for Mitch and everyone else. Everyone puts in a lot of work and when the results aren’t there and we’re not performing, it makes us look bad. If people saw behind the scenes and knew how much work we did put in, they’d know it’s not always perfect. There was a little bit of teething there for a little bit, but I think the bike is good and I feel good and hopefully we’re starting a little streak here and hopefully we can get on a little bit of a roll and keep the momentum. I just need to keep the good starts up and take it race by race.

From what some of the guys on the team told me and from a few other things I heard, it sounded like you guys took last weekend’s break in the race schedule and really went to work on some things.
Yeah, that’s an understatement. Adam of Showa actually flew out here on Sunday. My teammate Adam [Cianciarulo] drove up Sunday. He was here on Monday and Tuesday and he left on Wednesday. Adam from Showa was here all week. I don’t know how to put this, but we worked hard all week. I guess you could say we worked 9-to-5 all day and had a lot of long days, but I definitely feel like we made big improvements and great strides in the right direction.

Did you guys do all this work down at Ricky Carmichael’s place?
Yep. We were down at the Farm and we got a little bit of testing in.

"People are very quick to forget if you’re good, and when you’re bad, people tend to remember that a lot longer."

Did Mitch [Payton] and your mechanic Justin Shantie and some of the other team guys head back to RC’s place as well?
No, not this time. A lot of times when the guys would come back here it was Bones [Jim Bacon] and my mechanic and Adam from Showa. This time it was just Adam from Showa and Adam Cianciarulo and myself and that was it, man. We just took it over and made it happen. And we worked on a little bit of everything. We definitely worked on suspension tuning and we made a big improvement in my mind and a big stride in the right direction. And to then perform as well as we did at Millville and to feel really comfortable on the bike and to see the results when they were there, man, that made it all worth it. If we would have struggled on the weekend, it would have been frustrating, but that wasn’t the case. Thankfully, we performed. It made the testing all worthwhile.

To what you’re speaking about here, when the gate dropped at Millville, you immediately found your way into P1 and just cleared out. You looked confident.
Yeah, it’s crazy how much a little bit of change does. When you start feeling comfortable on the bike, it’s crazy to see how much everything starts clicking. It’s like the puzzle is being put together. All of a sudden, and I don’t want to say everything comes easy, but it all makes so much more sense when you’re riding and racing. Everything just kind of falls into place, and that’s really when it’s fun. It makes it a lot better when you’re happy, the team’s happy and the bike is happy when you’re riding it well. Everyone is in a good mood and everything seems to be jelling really well. That certainly makes it a lot easier.

Well, when you do put the work in and do the testing and then go out and go to the front to win a National, it certainly shows you leading by example. Do you know what I mean?
Yeah, for sure. I know Mitch definitely relies pretty heavily on me and looks to me to try and perform for the team. Obviously, I have teammates, but he definitely leans on me and expects me to pull through. You know we’ve been here before and we’ve won before, so he kind of expects that from me and I’m all about it. I like the added pressure and I want to be someone who he can look to and I can pull through for him. That’s another reason why it’s so nice to get a win. We had that whole week of testing and I was solid there and I was telling him the whole time, “Man, the bike is a lot better! It’s a lot better!” He was like, “Alright, cool. Sweet!” The whole thing was nice. To get the win and everything reassures that everything that I’ve been doing is correct.

When you pulled off the track and got off the podium and eventually got back to the truck, how was everybody?
It was one of those deals where it was a big relief. I can’t really explain it. You kind of have to be in the circle and be with everyone, but it’s frustrating. Week-in and week-out, we were struggling so bad. It all felt like a letdown. It felt good to finally get it going and to prove to Mitch that, “Hey, I still got it.” I know he believes in me, but it helps when you get the results and we were able to do that. Everyone around the team was pumped. To get good starts and to be good enough for the overall, that’s a huge step in the right direction.

It’s a tough world you exist in as you live and die by your results. It’s a dog eat dog sport, isn’t it?
Yeah, as quickly as you can be good, you can be just as bad and people are very quick to forget if you’re good, and when you’re bad, people tend to remember that a lot longer. We went to Colorado and won there, and then we went on this struggle for four or five rounds and how quickly that people just start to write you off. It’s frustrating. But I know for me, personally, I’m back east here at Carmichael’s place and I have Ricky in my corner and Jeannie, and I’ve got Johnny [O’Mara] in my corner and we’re putting in work.

Speaking of RC and Johnny, what did they have to say to you after winning the overall?
I haven’t actually talked to RC. RC’s thing is that when I do good, he never texts me. He tells me that what he expects of me.

No news is good news, eh?
Yeah, exactly. When I do good, I don’t get anything. When we struggle, that’s when he texts me and goes, “Hey, what’s the deal? What’s the problem? What can I do? What can be fixed?” Yeah, no news is good news. This weekend was a weekend where there was no news. It was definitely successful. And Johnny was pumped. I have a group of people who are with me through the wins and through the very tough times and Johnny was pumped. He told me I rode good and that’s what he expects from me. He thinks very highly of me and expects me to be up there week-in and week-out. Same with Mitch Payton. Mitch has believed in me from when he signed me. He’s always believed in me. He was pumped with what we did on Saturday. He was stoked to get another win. Mitch is accustomed to that and that’s what he expects from his guys and I was able to go out there and do it.