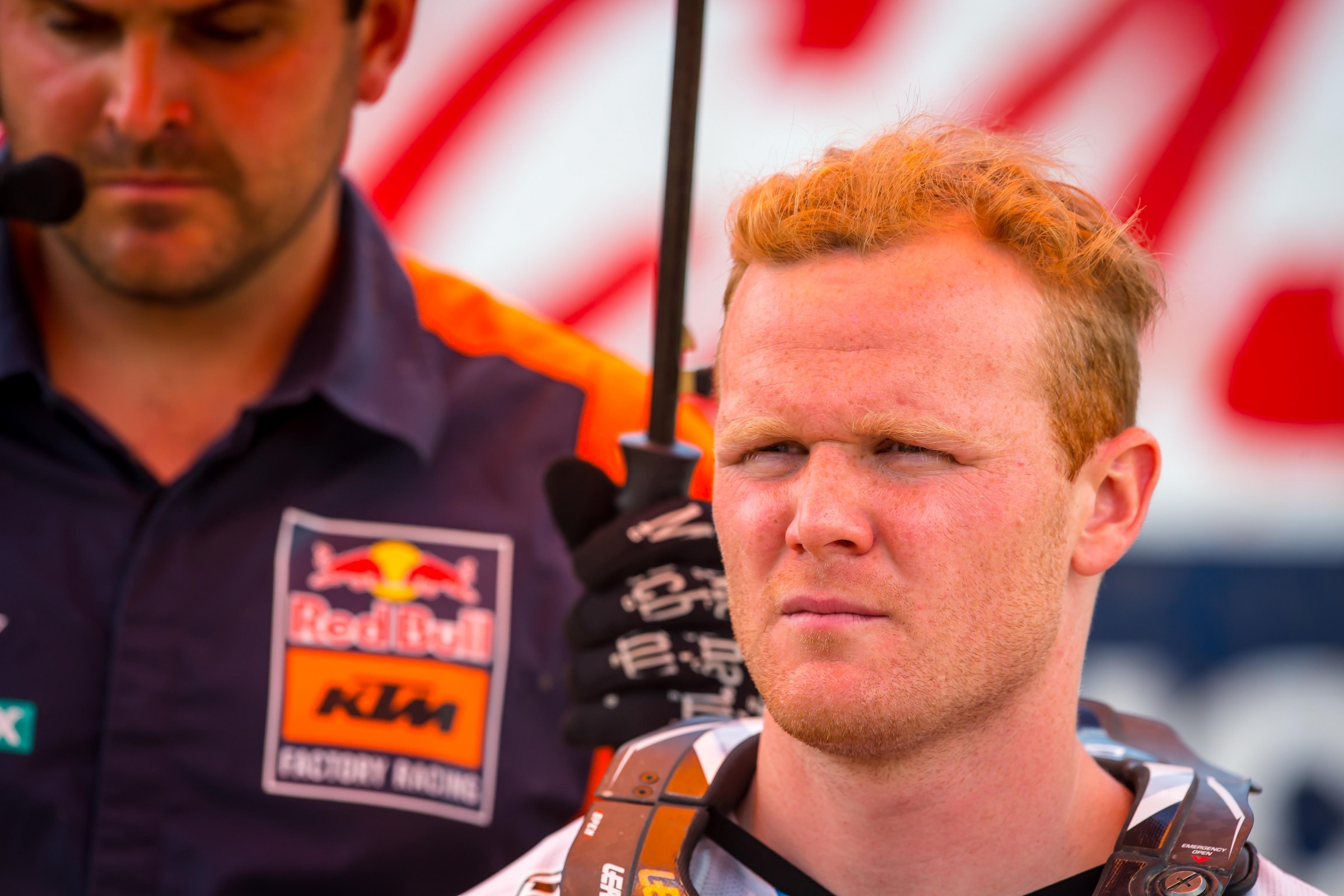 Trey Canard announced his retirement from Professional racing today at the SPring Creek National in Millville, Minnesota, the same track where he pro career started in 2007. Our staff weighs in with some memories from Trey's very Fast Decade.

Jason Thomas: Trey Canard was never one to hold anything back. He had a riding style that I often wished I could emulate in my own racing days. He just had an ability to sit on the ragged edge and make it work. His wins in Monster Energy Supercross and Lucas Oil Pro Motocross displayed some of the most incredible technique I have ever witnessed. His epic scrubs en route to a win at Jacksonville in 2011 were simply next level. He had an edge that most riders will never approach.

That ragged edge also bit him several times, too. He has missed dozens of races over the last few years because of injuries. He was the epitome of big risk, big reward. The incredible aspect of this was in his ability to bounce back, though. After his horrific incident at the 2012 Los Angeles SX, his first race back was a whopper of a battle with Davi Millsaps at Anaheim, nearly netting him a win. He took that age-old theory of “working your way back up to speed” and laughed at it. He would somehow always come back and be on the very sharpest edge of elite speed. His first race back in the 2011 Nationals was at Millville and true to form, he went out and set the fastest lap in the first qualifying practice. That’s just how he rolled. It was truly remarkable that he was able to sit out for months, get a few weeks of riding in and then go faster than anyone on earth.

That’s what I will remember most about Trey. Yes, he was riddled with unfortunate incidents that kept him out of action far too often, but, he was also one of the most resilient humans I have ever seen in the sport. He never let misfortune keep him down. He always came back firing like he had never missed a beat. He competed with absolutely no fear of failure. No matter how many times that life would knock him down, he got up and pushed even harder the next time. It’s something I always marveled at and something I will always respect.

That spirit is why he succeeded. His first pro event was at this very race, Millville 2006. As you would expect, Trey jumped out to the lead in the second moto in his first weekend as a pro. Slowly work into the pro ranks? Nah, not Trey. He was always jumping in with both feet. There aren’t many people willing to put it on the line like that. Whatever the next step in Trey’s life is, someone might want to warn them what’s coming.

Steve Matthes: When Trey Canard captured the 2010 250MX title it was one of the bigger upsets in recent memory. After all, he trailed Christophe Pourcel by seven going in and went 4-3 on the day at Pala, the last round. But with Pourcel's very strange crash in the first moto in which he separated his shoulder, it was enough to take the title. Canard then capped that year off with a win at the Motocross of Nations in Colorado. What a way to signal your farewell to the 250 Class.

And it's almost like Canard used all that karma he got that year (or his rookie 250SX season when he took another unexpected title) and ran out of it in the 450 Class. It wasn't like Trey had a reputation of getting hurt in the 250 Class for GEICO Honda, but he just couldn't stay healthy enough on the big bike to get any more championships. But man, when he was on, he was as fast as anyone.

All told he lined up for less than 50 percent of 450 races in his career because of injury (and not all his fault people, he had a couple of bike failures in there that caused him some serious injuries). Some might say that his 450 career was a let down. Not me. This was a rider that was capable of showing tremendous speed and winning races when everything was right. And that is very rare, folks.

Canard beat Chad Reed, James Stewart, Ryan Dungey, and Ryan Villopoto straight up more than a few times and there's a very short list of riders that have ever done that. His 250 motocross career was a long gradual grind from 2008 to the top in 2010. His 450 career was a starburst blinding us with greatness then disappearing from view as fast as it came on.

His most successful season in the 450 Class might have been the in 2014, when he was on the podium six times in 12 races and ended the year third overall in Lucas Oil Pro Motocross. That was the season he switched to KYB suspension on the Honda late in the year and started blitzing motos, going 1-1 at the final round then coming oh so close to winning a million bucks at the Monster Energy Cup a few months later.

Always a nice guy who was courteous to the fans and media, I was the guy who was in charge of calling Trey each month and help him with his Racer X magazine column. I remember he didn't want to talk about his racing that much, he didn't want to revel the readers with how great he was and how bitching his new shoe sponsor was. Nope. Trey wanted to rap about life experiences and try to leave people feeling good about something after reading his thoughts. He was much more than a guy who just raced motocross. With that in mind, I think he'll be just fine with whatever he chooses to do now that he's hung up the boots.

Thanks for the ride, Ice Trey!

Jason WeigandT: Trey Canard came in all smiles, mixed with some laughs. One of my favorite things about young Trey was his refusal to do the standard, boring rider interviews. During his rookie supercross season, while he was dealing with winning races immediately, battling Ryan Villopoto for a championship at the end, and getting pressure and advice from all sides, he somehow kept it light when the microphones came out. Trey literally would say his goal was to avoid the standard answers. He threw in some of his own new stuff about always giving it 200 percent, but you could tell in general that this was a smart kid who thought about what he said. One year during the Anaheim 1 press conference, I asked him the standard “So are you ready?” question and he fired back with a sarcastic “No!” as a reminder to avoid such dumb, obvious questions.

It was refreshing and it was fun, and when you combined his humble demeanor with some smiles and jokes, plus the wins, and the recipe was there to become everyone’s favorite racer. I think if everything had worked out right, Trey was in line to become a mammoth fan favorite in the mold of Kevin Windham.

Trey was nice, he was funny, he was humble, he was fast. Unfortunately, he would need all of those qualities to endure the darkness the sport would dish out to him. Trey had highs, but man did he have lows, too. In the end, all of that rough stuff even broke him a bit—the funny kid would still come around sometimes, but other times you could tell it was all weighing on him. For that, I feel bad, because his intentions were always right—win races, and make people happy. It was tough to do that sometimes.

And now he announces his retirement, and yes, it’s not after the season but during it. The toll became too much, and he has to call it a career a few races early. The good thing is now we can shift the focus from “What’s Trey’s latest injury?” and “Is he going to race this weekend?” to the bigger picture, which is that when he was good, he was really good. Trey is one of the few riders in the world that can say that on his day, he faced the best and beat them. His last major win came at the San Diego Supercross a few years back, in a straight-up duel against Ken Roczen. He’s beaten Dungey, Villopoto, Stewart, and Reed. He took on a lot of pain through the years, but for his sake, I hope he feels the good times made it all worth it, and he can still be that funny, smiling guy that walked into the pro pits 10 years ago.